Sea Level Rise! Don’t Look Up! Or, Down! Just Take Our Word!

Sea Level Rise! Don’t Look Up! Or, Down! Just Take Our Word!

[Editor’s Note: Enough with the hyperbole! Sea level rise is anything but the threat climate alarmists want it to be and it’s time we starting talking rationally about it.]

In the Netflix movie, Washington politicians “Don’t Look Up” because they prefer to remain oblivious to a special effects meteor that’s about to obliterate Planet Earth. Not surprisingly, the film is really about our refusal to recognize the “existential threat” of “manmade climate change.”

Director Adam McKay recently tweeted, “We’ve got 6-8 years before the climate is so chaotic we [will] live in a permanent state of biblical catastrophe.” 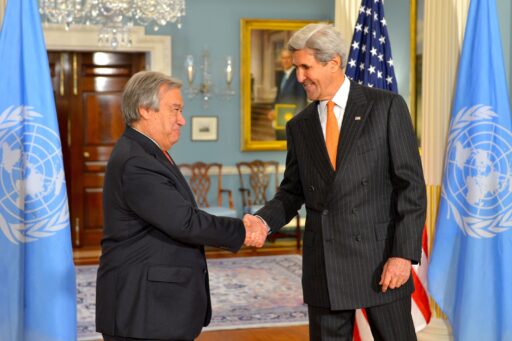 Former President of Socialist international and current U.N. Secretary-General António Guterres and former Secretary of State and current Climate Czar John Kerry. Guterres has also been part of the world Economic Forum. It is any wonder why this man wants to use climate to achieve a global reset with people like himself in charge?

Not to be outdone, UN Secretary General Antonio Guterres called the latest UN climate report “a file of shame, cataloguing the empty pledges that put us firmly on track toward an unlivable world.” Drilling for more oil and gas is “moral and economic madness,” he insisted. If humanity doesn’t stop using fossil fuels, we will be overwhelmed by devastating floods, heat waves, droughts, fires and crop failures.

Back on the non-parallel-universe Planet Earth, a truly unlivable world would be one without fossil fuels. Not just to generate electricity, cook food, heat homes and water, and power cars, boats, trains and planes – but for fertilizers and insecticides to grow more food on less land, and for plastics, pharmaceuticals, paints, cosmetics, clothing and other essential products. For us today; for billions more tomorrow.

Fossil fuels to extract and process trillions of tons of raw materials, too, and manufacture the millions of wind turbines, billions of solar panels, billions of battery modules and millions of transmission line towers that would blanket our croplands, scenic areas and wildlife habitats if we didn’t have fossil fuels.

In fact, far worse than a warmer planet with more airborne plant-fertilizing carbon dioxide would be a colder planet with less CO2. That would mean less arable land, shorter growing seasons and much lower crop yields, on top of losses from a devastated Ukraine and sanctioned Russian wheat crops.

One of the prevalent climate alarm themes is sea level rise.

Back on real Earth, if the DC Swamp inhabitants of 35 million years ago had looked up, they’d have been transfixed in their last moments by a non-special-effects meteor hurtling into what is now Cape Charles, Virginia on the Chesapeake Bay. The 2-mile-wide meteor obliterated and pulverized sediments and bedrock, vaporized plants and animals, sent rock fragments hundreds of miles in every direction, and launched tsunamis into West Virginia’s eastern mountain slopes.

Shattered rock settled back into a crater 4,300 feet deep and 53 miles in diameter. Over the ensuing millennia, river and ocean sediments poured into the crater – and mile-high glaciers pulled 10-million cubic miles of water out of the oceans, burying half of North America, Europe and Asia under trillions of tons of ice. Land under the ice was pressed down, while land outside the glacial zones was lifted up. Then, some 12,000 years ago, the last Pleistocene glaciers began melting.

Oceans slowly rose – some 400 feet! Land masses underwent “isostatic rebound.” Areas that had been under the ice began rising; those that had bulged upward began sinking. In much of the Chesapeake Bay region, post-glacial subsidence is compounded by continued compression of pulverized crater rock – and by the ongoing withdrawal of groundwater from sedimentary aquifers beneath urban and agricultural areas that depend on groundwater.

The aquifers include layers of porous sandstone (with water between sand grains) interspersed among layers of impermeable but water-soaked shale and clay. As water is pumped out of the sandy layers, the shale-clay layers get squeezed by hundreds of feet of overlying rock and sediment, and their water is forced into the sandstones, and then into pumps. The overlying land steadily subsides.

The situation in Houston-Galveston, Texas, Santa Clara Valley, California, and other places around the globe is similarly complicated, even without post-glaciation issues. To single out actual sea level rise – and blame the rise on humans and fossil fuels – is simply disingenuous.

However, salt-water intrusion and coastal flooding are serious, recurrent, growing problems, especially during hurricanes and as more expensive homes are built along coasts. Some communities have slowed subsidence by relocating groundwater pumping stations away from the coast, reducing withdrawal rates, increasing aquifer recharge, or substitut­ing surface water for groundwater. Others have installed sea walls, improved drainage systems, and pipelines to bring water from nearby lakes and rivers. Other options include desalination plants to create more fresh water, recycling household “gray water” to agricultural use, and switching to less water-intensive irrigation methods, as Israel does.

These approaches are far more practical and cost-effective than trying to stop seas from rising any further, like a modern King Canute, by banning fossil fuels, especially if it’s done only in some Western nations.

Meanwhile, inhabitants of Tuvalu, the Maldives and other Pacific islands and coral atolls worry about rising seas due to fossil fuels. However, most of them are increasing in land area, not decreasing – as corals grow, sediments are laid down off their coasts, and volcanic lava flows expand land masses.

Moreover, few of these islands and coral reefs even existed 12,000 years ago, when the Wisconsin Glaciation extracted 400 feet of seawater from the world’s oceans. The islands and atolls began growing as the seas rose. They’ve continued growing with every additional foot of sea level rise since the last Ice Age and the Little Ice Age (1350-1850) – and show no signs of stopping.

Cosquer Cave’s Paleolithic paintings near Marseille, France (the entrance is 115 feet below current sea level) and a Mel Fisher dive team’s discovery of charred tree branches and pine cones from a forest fire 8,400 years ago in 40 feet of water off the Florida coast further attest to steadily rising seas.

Yet, experts tell us. (1) “Snows are less frequent and less deep. The rivers scarcely ever freeze over now. There is an unfortunate fluctuation between heat and cold in the spring, which is very fatal to fruits.” (2) “We were astonished by the total absence of ice in Barrow Strait. I was here at this time [six years ago] – still frozen up – and doubts were entertained as to the possibility of escape.” (3) “The Arctic Ocean is warming up, icebergs are growing scarcer, and in some places the seals are finding the water too hot.”

Instead of parroting scare stories – and demanding that fossil fuels be replaced by pseudo-clean, pseudo-renewable energy – it really behooves us to think, analyze, ponder the many ways fossil fuels improve our lives, and demand real evidence instead of GIGO computer models for any supposed climate crisis.