Shapiro Being Funded by Big Green Machine (and China?)

Shapiro Being Funded by Big Green Machine (and China?)

[Editor’s Note: Josh Shapiro is no friend of trade unions. He is being supported by the China connected NRDC gang of blue bloods who want to shut down pipelines and fracking.]


Climate change activists opposed to energy production in Pennsylvania like what they see in Josh Shapiro, the attorney general now running for governor.

That is significant because both political action committees are tied in with well-endowed environmental groups that have been the subject of congressional probes into Russian-funded efforts aimed at disrupting America’s energy sector. 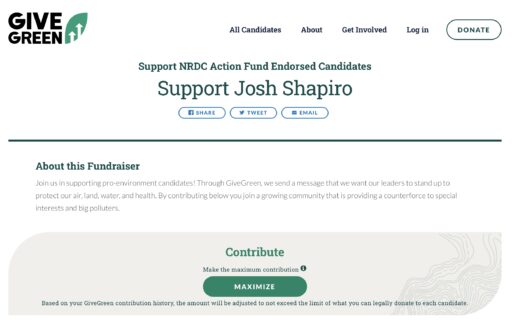 The NRDC, which has more than $460 million in assets, according its most recent tax filing, incessantly lobbies in favor of regulations restricting energy use in Pennsylvania. The New York-based nonprofit has also published reports designed to undermine public support for innovative drilling techniques like hydraulic fracturing that make it possible to access oil and gas deposits in the Marcellus Shale, a geological formation of sedimentary rock that cuts across parts of Pennsylvania, New York, Ohio, Maryland, Virginia, and West Virginia.

The Marcellus Shale Coalition, a group that supports energy companies and their employees, has a blog postdetailing the harm that could be done to America’s economic, environmental, and national security interests in the event of a ban on hydraulic fracturing. That seems to be the overriding goal of the NRDC, and other environmental activist groups, that figure into a money trail allegedly leading back to Russia.

In 2017, U.S. House members sent a letter to then-Treasury Secretary Steven Mnuchin, calling attention to the role played by the Sea Change Foundation, a private entity based in San Francisco, that received funding from an overseas source.

The foundation received $23 million from a Bermuda-based shell company between 2010 and 2011, which was then funneled into groups like the NRDC, the Sierra Club, and the League of Conservation Voters Education Fund in the form of grants, according to the letter.

For the record, the NRDC has also been called out for maintaining close relations with China that suggest it may be operating in violation of foreign agent registration requirements.  In 2018, members of the U.S. House Natural Resources Committee sent a letter to NRDC inquiring about its collaborative efforts with Chinese government officials.

The group has denied operating as a foreign agent. But thanks to its well-heeled benefactors, it has ample funds to put Pennsylvania residents who rely on affordable, reliable energy at a great disadvantage.

Will Trade Unions Allow Shapiro to Stab Them in the Back As Biden Has Done?

What are the implications for the governor’s race in Pennsylvania and the future of energy policy for the state?

Although Shapiro postures as an ally of trade unions on the campaign trail, he is also accepting funds from environmental activist groups that target the industries supporting union workers. Even so, those same trade unions have contributed almost $3 million to Shapiro’s run for governor since 2021, according to campaign finance records. But is the attorney general really devoted to protecting union jobs associated with coal, oil, and gas companies?

“Josh Shapiro rejects the false choice between protecting jobs and protecting our plants – he believes we must do both, and he will support Pennsylvania’s natural gas industry, invest in clean energy, and protect Pennsylvanians’ constitutional right to clean air and pure water. He will protect the jobs we have while creating thousands more, and that’s why workers in the energy industry and environmental advocates have endorsed his campaign,” said Shapiro campaign spokesman Will Simons.

NRDC Action Votes and the Conservation Voters of PA Victory Fund recently announced they would spend $500,000 in independent expenditure campaign funds on behalf of Shapiro. Apparently, environmental activists expect Shapiro to cut a path toward their preferred regulatory policies if elected.

That’s a problem not just for Pennsylvania, but for the American people as a whole. The U.S. Energy Information Administration identifies Pennsylvania as the nation’s number two natural gas producer after only Texas and the number three coal-producing state after Wyoming and West Virginia. It’s not hard to understand why a Russian propaganda campaign would attempt to take down Pennsylvania’s energy industry.

Even if the green groups don’t view themselves as foreign agents, they clearly view Shapiro as a conduit for anti-energy initiatives that benefit America’s foreign adversaries.

This article originally published at Delaware Valley Journal and reposted here with permission of the author.