[Editor’s Note: Josh Shapiro is just another demagogic pol determined to appease every special interest out there, including anti-fracking, anti-pipeline gentry class enviros!]

A group of so-called environmental organizations that are IRS tax-exempt is really nothing more than a political front for the Democrat Party. We’re talking about PennEnvironment, Conservation Voters of Pennsylvania, and the odious National Resources Defense Council (NRDC), three groups that have collectively poured nearly $5 million into advertisements this election cycle supporting the anti-drilling, anti-fracking, anti-Marcellus Josh Shapiro. Why these organizations are still tax-exempt is a mystery to us, as they are completely partisan (Democrat), a violation of the federal tax code. 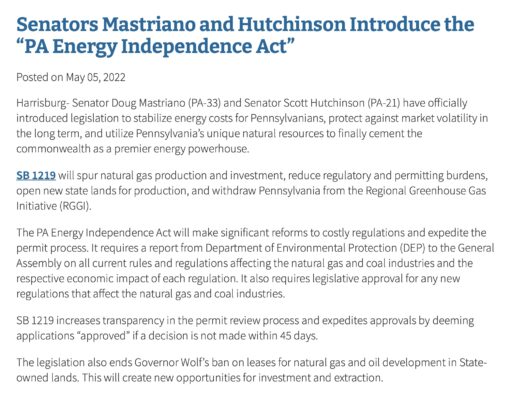 This news release tells us everything we need to know about Doug Mastriano vs. Josh Shapiro and there’s but one choice as Jim Willis explains..

The Conservation Voters of PA and its various PACs brag that they’ve spent $3.2 million this year on PA political races–mainly for Shapiro. PennEnvironment, somehow tied to Conservation Voters of PA (under the same organizational umbrella, something we didn’t know before today), spent more than $1 million for Shapiro. And the NRDC shucked out $500,000 for ads in favor of Shapiro. All of these organizations are hard-left, anti-fossil energy zealots. They support Shapiro. What does that tell you? It tells you Shapiro’s mealy-mouthed support of fracking is a lie. He hates it. And he will set his sights on getting rid of it.

The antis bragged to their favorite mouthpiece, PBS StateImpact Pennsylvania, about spending big money to promote Josh Shapiro as the state’s next governor:

“We’ve spent vastly more money on elections in this state than we have before,” said Molly Parzen, executive director of Conservation Voters of Pennsylvania. “This is such an existential election for environmental issues in this state, particularly at the top of the ticket with the governor’s race. This has always been a must-win race for us.”

Republican candidate Doug Mastriano denies the existence of climate change, pledges to pull the state out of the Regional Greenhouse Gas Initiative, and promises to de-regulate the oil and gas industry.

Democrat Josh Shapiro, while supportive of fracking, favors regulation, and he filed charges against Mariner East pipeline builder Energy Transfer, which led to the company pleading no contest to criminal charges in August. He also says he will raise clean energy targets for the state.

“It really is a stark picture of the direction our state can go on a variety of issues,” Parzen said.

Parzen said the group’s PAC, Conservation Voters of PA Victory Fund, in conjunction with the national Super PAC, the League of Conservation Voters Victory Fund, spent $1.2 million in Pennsylvania in 2020. But this year, she says the group will spend about $3.2 million to run ads and do Get Out the Vote efforts for both the Governor and Senate races, as well as some down-ballot state lawmakers.

Conservation Voters of PA has run television ads for the first time, in support of Shapiro. Door-knocking is targeting suburban Philadelphia voters where redistricting has presented the potential to elect more pro-environment state lawmakers in Bucks and Chester counties.

They also used computer models to target a list of unlikely voters who care deeply about climate issues.

“We ended up doing $250,000 of direct mail layered with $250,000 of digital ads, with a climate message to that specific universe of voters, who, if we didn’t talk to them specifically on this message, they may not turn out to vote,” Parzen said. “And so that’s going to be a really interesting experiment to see the results of and hopefully will result in that extra boost of turnout.”

She said those voters tend to be female, youth, and people of color.

PennEnvironment also stepped up its door-to-door canvass targeting voters who may not typically vote in the mid-terms. The statewide group, through a partnership with the national Environment America Action Fund, is spending more than $1 million, about 30 percent more than in previous years said executive director David Masur.

“There’s certainly more at stake with climate change being the existential crisis,” said Masur. “The clock is ticking and we’re running out of time. With every election that window is closing to prevent us from going off this climate cliff that we can’t come back from.”

Another Super PAC, NRDC Action Votes, contributed $500,000 toward the CVPA efforts in support of Shapiro. Launched in 2020, the group focuses its efforts on broadcast and digital ads.

“The stakes are extraordinarily high on the state, region and national level out of Pennsylvania this year,” said Jocelyn Steinberg, director of NRDC Action Votes. “Mastriano has the worst voting record on climate in the legislature.”

Not all environmentalists are happy that Shapiro and Democratic candidate for Senate John Fetterman continue to support fracking. But Steinberg says there’s still a big difference when compared to their GOP opponents.

“Neither Shapiro or Fetterman have an easy answer on that,” she said. “And it isn’t an easy answer. Unfortunately, with Mastriano and Oz, their answer is continuing to take contributions from industry and to not regulate the industry.”

The Pennsylvania Senate race could decide the balance of power in the Senate, which makes it even more crucial. And Republican candidate Mehmet Oz has support from the oil and gas industry, including $31,036 from Mariner East pipeline builder Energy Transfer.

“One reason we put such a priority on this race is that Oz has now denied the basic science of climate change and has taken massive donations from the oil industry,” Steinberg said.

The group spent $1.6 million on ads in Pennsylvania on the race for governor, Senate and the in support of Democratic Congressman Matt Cartwright. Half of those funds targeted the Senate race.*

Mark our words and revisit this post in a year. If Pennsylvania installs Josh Shapiro as its next governor, the Marcellus industry will be greatly harmed. Drillers will drill far less a year from now than they do today, and many companies will simply leave and go to other states and even other shale plays to do business. PA is about to make a TRAGIC mistake if it elects the anti-Marcellus candidate Josh Shapiro as governor.

Editor’s Note: Josh Shapiro would, indeed, be a nightmare for Pennsylvania; another fractivist appeaser who would advance RGGI, continue fighting pipelines and otherwise do everything he could to frustrate energy freedom for Pennsylvania. It couldn’t be more clear, in fact. Doug Mastriano, by contrast, haws made energy development a key plank of his platform. Mastriano and Zeldin, too, could be the two-some that finally brings justice for those of us who are trapped in the Delaware River Basin. Vote like your future depends on it, because it does. Mastriano will reverse the horrible direction of the incompetent Wolf administration. Shapiro would accelerate the rush to ruin. The promotion of his cause by the Delaware PovertyKeeper’s sisters in service to the gentry ruling class at StateImpactPA is all the evidence required.