Shapiro Would Be A Fracking Nightmare for Pennsylvania!

Shapiro Is A Fracking Nightmare for Pennsylvania!

[Editor’s Note: Josh Shapiro is just another leftist wedded to the global warming scam and intent on destroying the very industry that has saved Pennsylvania from becoming NY.]

There is no question that Pennsylvania Attorney General Josh Shapiro is anti-Marcellus Shale drilling. No Question! And if you look at his public statements, as reported by the official mouthpiece of the Democrat left (PBS), his own statements on the gubernatorial campaign trail indicate Shapiro will allow very little new drilling in the Marcellus.

Most new permits will be wiped out by a Shapiro DEP that will enforce huge new setbacks (“no drill zones”), institute onerous new regulations of tiny pipelines with almost no pressure in them (very expensive), and grant “comprehensive health responses” to anyone living near fracked wells (meaning anyone with a faux health claim is to be believed and awarded big money from the company that drilled the well). 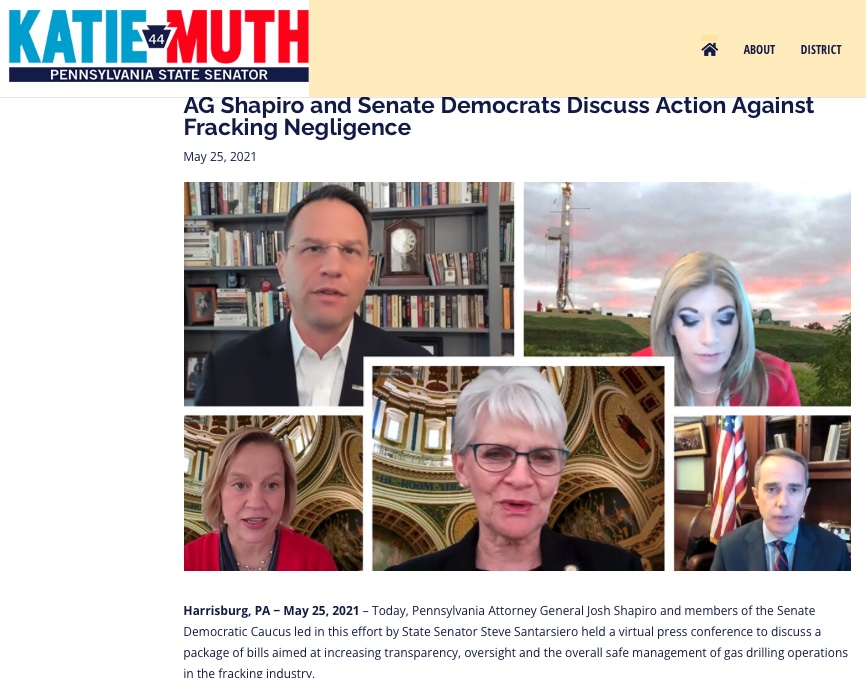 This headline from Katie Muth’s site says it all; Josh Shapiro is aligned completely with other Democrat radicals who want to treat all fracking as dangerous and end it. The word “negligence” is merely added for cover, of course.

Our back-of-the-envelop calculation is you can expect perhaps a 75% decrease in the number of new permits issued from current levels in a Josh Shapiro administration. And the level of permits we see now is already WAY down in number (see the chart on the left).


If you care about Marcellus shale drilling and you live in PA, you cannot vote for Josh Shapiro. Period! If we hear even a whiff of any Marcellus company donating money to Shapiro’s campaign, we want to know, because they will be outed here and will be persona non grata on MDN indefinitely. That’s how strongly we feel about the damage Shapiro will do to the industry in the Keystone State should he gain ultimate power.

The Democrat PR machine known as PBS recently ran an article comparing the positions of both Doug Mastriano (the Republican candidate) with Josh Shapiro (the Communist Democrat candidate) with respect to energy. Of course, the article is snarky and sarcastic–meant to make fun of Mastriano. If you look at Shapiro’s positions as chronicled by PBS, it doesn’t take a genius to figure out that even though he mouths platitudes about “responsible fracking,” what he really means is “no fracking.”

In Pennsylvania, it’s usually not a question of whether a statewide candidate is supportive of the oil and gas industry but to what extent.

That’s the case for the leading candidates for Pennsylvania governor, Democratic Attorney General Josh Shapiro and Republican state Sen. Doug Mastriano of Franklin County, who will face off this November.

Pennsylvania is one of the largest fossil fuel producers in the U.S, accounting for 9% of the country’s total natural gas production. It’s also the third-largest provider of energy to other states and the fourth-largest carbon dioxide emitter.

However, polling shows that voters in the state are increasingly concerned about climate change driven by the burning of fossil fuels and the industry’s impacts on the environment.

Ahead of the Nov. 8 election, Spotlight PA breaks down where the top candidates stand on major energy and environmental issues:

Mastriano has unabashedly and loudly called for deregulation of the state’s fossil fuel industries. In March, he introduced the PA Energy Independence Act, which would make it easier for oil, gas, and coal companies to dig for resources throughout the state.

The bill would mandate that the state Department of Environmental Protection review natural gas and coal permits within 45 days, or the permits would automatically be approved as long as they meet certain conditions. It would also lift the Wolf administration’s ban on leases in state parks and forests, establish a cap on permitting fees for fracking wells, and exempt Pennsylvania’s coal industry from federal regulations.

“We need to open more of our lands for fracking and drilling,” wrote Mastriano in an op-ed supporting expanding Pennsylvania’s energy production. “The blessing of Marcellus Shale in Pennsylvania is still underutilized with untapped deposits of natural gas.”

Spotlight PA could not locate any public statements from Mastriano on renewable energy and his campaign did not respond to a request for comment.

Shapiro has called for “responsible fracking” and energy production that causes minimal harm to the environment. He has pledged to adopt the recommendations of a grand jury report he commissioned as attorney general that suggested expanding “no-drill” zones, requiring disclosure of fracking chemicals before they are on-site, regulating smaller pipelines, and conducting “comprehensive health responses” to the effects of living near fracking sites.

In a plan on his campaign website, Shapiro said he would invest in the research, development, and design of zero-carbon technologies such as nuclear, hydrogen, and carbon capture, efforts he says would support business and job creation.

He similarly has said he would focus on growing clean energy. On his campaign website, Shapiro said he would raise the 2030 target for renewable or clean electricity production from the current goal of 8% to 30%, and reach net-zero emissions by 2050.

Last April, Pennsylvania joined the Regional Greenhouse Gas Initiative (RGGI), a pledge undertaken by a dozen states to reduce emissions by requiring fossil fuel power plants to purchase allowances to emit carbon dioxide. The profits from allowances then go back into the state to reinvest in renewable energy, flood control measures, or other initiatives.

The state’s participation in the program immediately drew the ire of Republican lawmakers and industry groups, who filed a case in Commonwealth Court to prevent the state from joining. Subsequently, Pennsylvania was not able to participate in the sale of allowances this September.

Mastriano has vocally criticized Democratic Gov. Tom Wolf’s decision to join RGGI and pledged to pull out of the initiative as governor — a concept he introduced in his energy independence bill. He argues RGGI “will do far more harm than good,” as its regulations would drive companies looking to invest in the energy industry to neighboring states.

The Department of Environmental Protection predicts the program will create over 30,000 jobs, and anticipates it will decrease coal generation. The coal industry employs over 10,000 workers, according to the DEP. One study of other states who participate in RGGI found increased economic activity and job growth. .

Mastriano has also called the effects of RGGI on climate change “negligible.” However, carbon pricing has been shown to reduce emissions, and most environmental, economic, and public policy academics agree that the program will have at least a modest impact on slowing down climate change in the state.

Shapiro has yet to commit to staying in RGGI. On the campaign trail, he’s said he’s not sure RGGI is the most effective way to reduce environmental impact while protecting jobs and affordable energy prices in the state. Shapiro said that he would have to consult with workers and experts before making any decisions.

Mastriano has called global warming an academic fabrication and makes no mention of climate change on his campaign website.

His campaign has rarely mentioned conservation of natural resources. When asked how he would protect Pennsylvania’s environment in a candidate survey, he wrote, “I’m an Eagle Scout and respect the environment — we are stewards of the land.”

Shapiro has said he wants to combat climate change while also creating new jobs for Pennsylvanians, arguing it’s a ” false choice between protecting jobs or protecting our planet.”

The Natural Resource Defense Council Action Fund and the Conservation Voters of PA Victory Fund have both come out in support of Shapiro, spending at least half a million dollars on ads criticizing Mastriano.

As attorney general, Shapiro charged Energy Transfer, a pipeline-building company, with environmental crimes including causing damage to wetlands, waterways, and drinking water while constructing liquid natural gas pipelines. He also charged the company with negligence over its role in a 2018 explosion. which led to an explosion in 2018.

Shapiro’s “no-drill” zones mean setbacks that would wipe perhaps 50% of the existing permits issued for shale drilling off the board–many wells would no longer be allowed. Requiring disclosure of fracking chemicals before they are on-site is a non-issue–those disclosures are already made. Regulating smaller pipelines means regulating gathering pipelines.

Those pipelines present absolutely no threat of any kind. The intention is to block such pipelines, and, if any are allowed, make them so expensive that pipeline companies (and drillers) think twice about building them. Take another 10% of new shale permits off the table.

Finally, conducting “comprehensive health responses” to the effects of living near fracking sites means any crackpot with a claim that “fracking ruined my health” will be able to sue a driller, and the driller will have to pay. Take another 15% of new permits off the table–drillers will avoid more urban areas like those around Pittsburgh for fear of liability claims.

In our book, it all adds up to about a 75% reduction in the number of new permits issued. This is just our unofficial estimate, and maybe we’re off. But here’s the thing: Shapiro will definitely cause fewer permits to be issued, and fewer new wells will get drilled across the state. That is a CERTAINTY. Maybe it’s a 50% reduction from current levels. Maybe a 75% reduction. Maybe a 33% reduction. Our point is, Shapiro is coming for the Marcellus industry–as evidenced by his aggressive targeting of the industry as AG. He will keep it up as Governor–only worse.

We refuse to believe the race is over (as the pundits tell us every day). There’s still time to ensure Shapiro will not put an end to the Marcellus miracle in Pennsylvania.