[Editor’s Note: New York State is playing a silly but dangerous shell game with climate politics that will eventually come down hard on all innocent New York State citizens.]

In the past twelve months I have spent an inordinate amount of time evaluating the Climate Leadership and Community Protection Act (Climate Act) and the Scoping Plan implementation plan framework to meet the ambitious net-zero goal by 2050.  Climate Action Council Co-Chair Harris recently made the claim that delaying climate action will cost New Yorkers more than acting now.  However, that statement is misleading and inaccurate.  This post shows that the claim is no more than a shell game gimmick.

Everyone wants to do right by the environment to the extent that they can afford to and not be unduly burdened by the effects of environmental policies.  I submitted comments on the Climate Act implementation plan and have written over 250 articles about New York’s net-zero transition because I believe the ambitions for a zero-emissions economy embodied in the Climate Act outstrip available renewable technology such that the net-zero transition will do more harm than good.  The opinions expressed in this post do not reflect the position of any of my previous employers or any other company I have been associated with, these comments are mine alone.

The Climate Act establishes a “Net Zero” target (85% reduction and 15% offset of emissions) by 2050. The Climate Action Council is responsible for preparing the Scoping Plan that will outline how to “achieve the State’s bold clean energy and climate agenda.”  The Integration Analysis prepared by the New York State Energy Research and Development Authority (NYSERDA) and its consultants quantifies the impact of the strategies.

That material was used to write a Draft Scoping Plan that was released for public comment at the end of 2021. The final Scoping Plan was approved by the Climate Action Council on December 19, 2022 and the Integration Analysis documentation was recently updated.

The first shell game gimmick picks and chooses what control strategies are included in the costs of de-carbonization.  In order to evaluate the effects of different policy options, The Integration Analysis model projects future conditions for a baseline case.  The evaluation analysis makes projections for different policy options, and then the results are compared relative to the baseline.

Standard operating procedure for this kind of modeling is to use a business-as-usual or status quo case for the baseline.  Appendix GSection 3.4: Benefits and Costs argues that the costs of the control strategies should be considered relative to status quo or business as usual costs:

When viewed from a systems expenditure perspective (Figure 48), the NPV of net direct costs for Scenarios 2, 3, and 4 are moderate, roughly 11% as a share of the NPV of reference case system expenditures ($2.7 trillion). Because significant infrastructure investment will be needed to maintain business as usual infrastructure within the state irrespective of further climate policy, redirecting investment away from status quo energy expenditures and toward decarbonization is key to realizing the aims of the Climate Act.

Figure 51 from Appendix G is the documentation for the claim that the cost of inaction exceeds the cost of action by more than $115 billion.  In my Draft Scoping Plan comments I argued that the figure is mis-leading because it presents the numbers relative to a Reference Case rather than a business-as-usual or status quo case that represents a future without decarbonization programs.  I maintain that the true cost of New York’s net-zero transition by 2050 should include all costs associated with all programs designed to reduce GHG emissions.  The authors of the Integration Analysis and Scoping Plan excluded decarbonization costs that I believe should be included and provided insufficient documentation to enable anyone to determine what is in or out of the Reference Case. 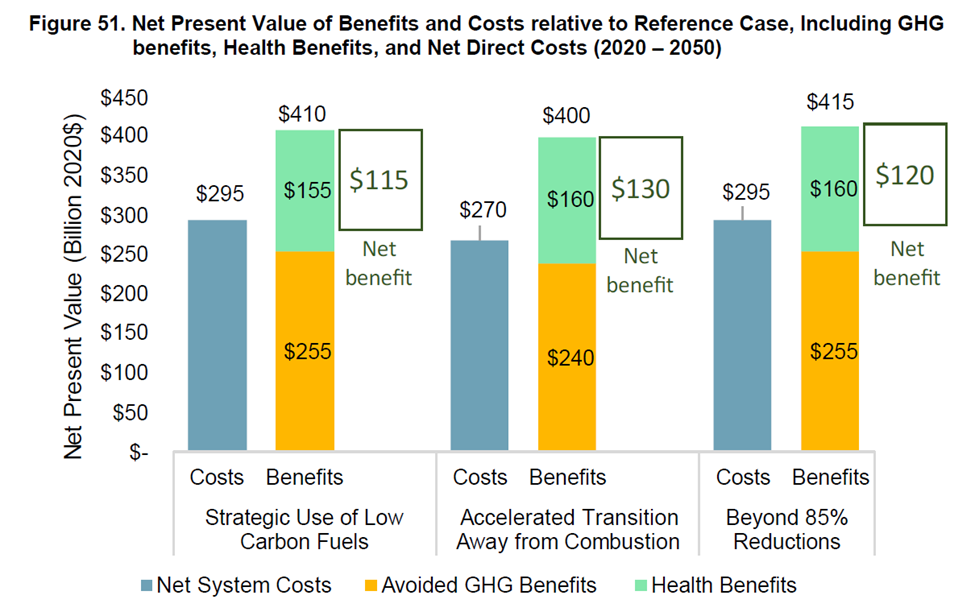 In the Scoping Plan shell game, the first thing to watch is the claim that “significant infrastructure investment will be needed to maintain business as usual infrastructure within the state irrespective of further climate policy, redirecting investment away from status quo energy expenditures and toward decarbonization is key to realizing the aims of the Climate Act” but at the same time including decarbonization costs for “already implemented” programs in the Reference Case.  If a reader loses track of this shell, it is easy to assume that the costs presented are relative to a business-as-usual or status quo modeling scenario per standard procedures.  Instead, the State compares mitigation scenario costs to a Reference Case that includes “already implemented” decarbonization costs.

There is another shell to watch.  In my review of the Draft Integration Analysis supplement, I ended up searching the document for the phrase “reference case” to try to determine what “already implemented” decarbonization programs were included in the Reference Case.  The following figure reproduces the page with the documentation on page 12 in Appendix G Integration Analysis Technical Supplement Section I. The documentation is buried in the footnote for the circled reference for the blank caption to Figure 4. 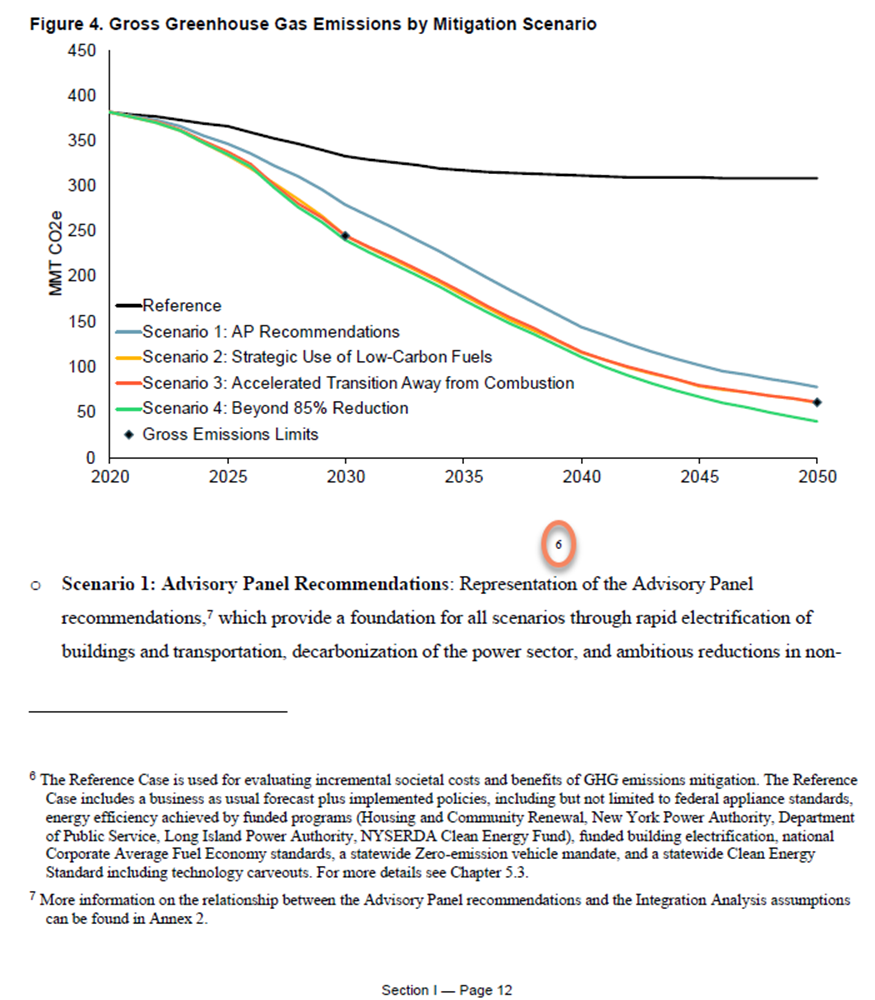 Given its importance to the cost/benefit claim, my Draft Scoping Plan comment noted that this reference case caveat should be clearly described in the text rather than in a footnote.  What I missed in the draft was a reference to explanatory text in section 5.3 of the document.  However, that text was not included in the draft document! The appropriate text is in the recently released Appendix G section 5.3: Scenario Assumptions chapter and lists the “already implemented” programs.  It states:

The integration analysis evaluated a business-as-usual future (Reference Case) a representation of recommendations from CAC Advisory Panels (Scenario 1), and three scenarios designed to meet or exceed GHG limits and carbon neutrality (Scenarios 2 through 4). Scenarios 2, 3, and 4 all carry forward foundational themes based on findings from Advisory Panels and supporting analysis but represent distinct worldviews. A detailed compilation of scenario assumptions can be found in Annex 2.

For the record Annex 2 refers to a  massive spreadsheet that is certainly detailed but most certainly does not provide an easily accessible compilation of scenario assumptions.  In particular, the documentation does not provide explicit information to determine what costs are specifically included in the Reference Case relative to the other scenarios.

The Reference Case described as “Business as usual plus implemented policies” includes the following:

Figure 47 shows the total net present value (NPV) of direct costs relative to the Reference Case over the period 2020-2050.  However, these bar charts provide little information. 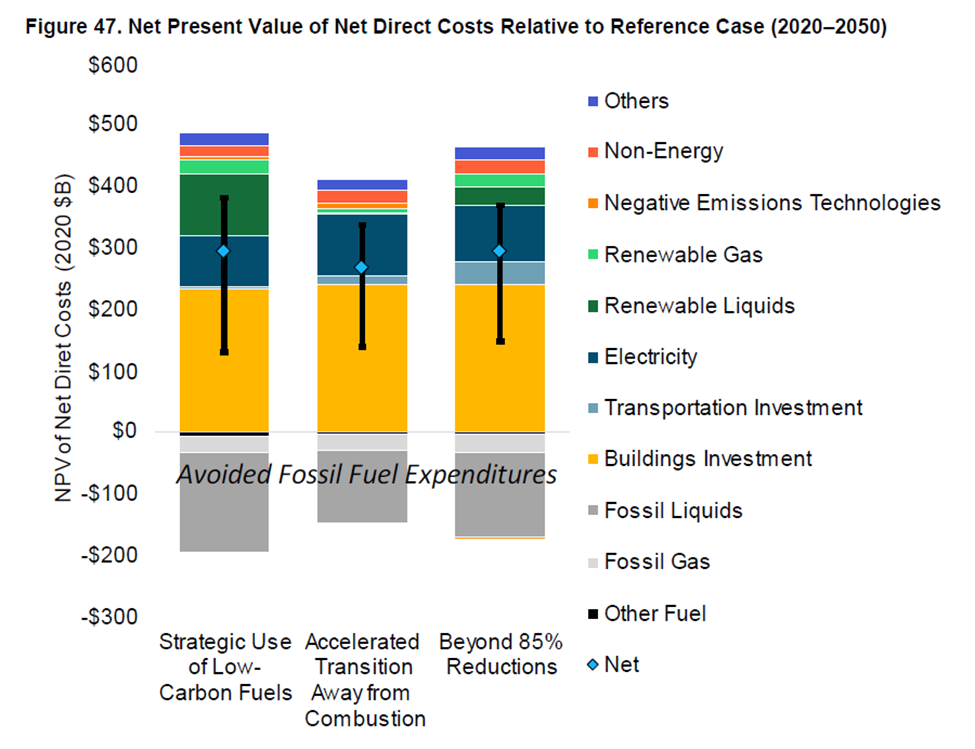 It is more useful to look at a table of the values to try to understand how the Reference Case costs differ from the mitigation scenarios.  That information is available in the IA-Tech-Supplement-Annex-2-Key-Drivers-Outputs-2022 spreadsheet.   One thing that jumps out is the $3.45 billion difference for the Transportation Investment between the Reference Cased and the Low-Carbon Fuels Scenario.

There are only two decarbonization programs included in the Reference Case: Corporate Average Fuel Economy (CAFE) standards and Zero-emission vehicle mandate (8% LDV ZEV stock share by 2030). In my opinion that $3.45 billion difference either indicates that most of the EV electrification costs are improperly included in the Reference Case or that the cost estimates are suspect.

I found that both issues contribute to the small difference between the Reference Case and the Low-Carbon Fuels scenario.  According to the Scoping Plan the costs to replace light-duty vehicles, trucks, and buses with electric alternatives, provide the charging infrastructure to support those vehicles, and upgrade public transit services is only $3.45 billion over 30 years.

For the most part the only reason for those expenses is decarbonization and whether it is explicitly part of the Climate Act or not, those costs should be included in the costs of the Climate Act. They have to be hundreds of billions of dollars. I have no doubts that proper accounting would reduce or reverse the alleged favorable benefit-cost ratio if just this is correctly attributed.

I believe that the cost estimates are also suspect.  My Draft Scoping Plan Comment on Electric Vehicles analyzed the Integration Analysis spreadsheet documentation.  The Integration Analysis presumes that the device costs for zero-emissions charging technology and the vehicles themselves decrease significantly over time.  Home EV chargers and battery electric vehicles both are claimed to go down 18% between 2020 and 2030 alone.

The following graph of electric vehicle costs shows that the costs for battery electric and hydrogen fuel cell vehicles that are the proposed solution go down over time.   The costs for gas, diesel, and Plug-in Hybrid Electric vehicles are all identical and stay pretty constant.  Given that PHEV also use batteries, why wouldn’t that technology cost decrease similar to the full battery EV.  The overall cost decreases in the preferred technologies are so large that the total costs for the zero-emissions vehicles adoption is cheaper than using existing technology.  My comments noted that I cannot accept this optimistic assessment of future cost reductions without documentation that addresses at least the potential for battery supply chain issues.  The Climate Action Council “acknowledged” my comment by providing a link but never addressed the issues that I raised. 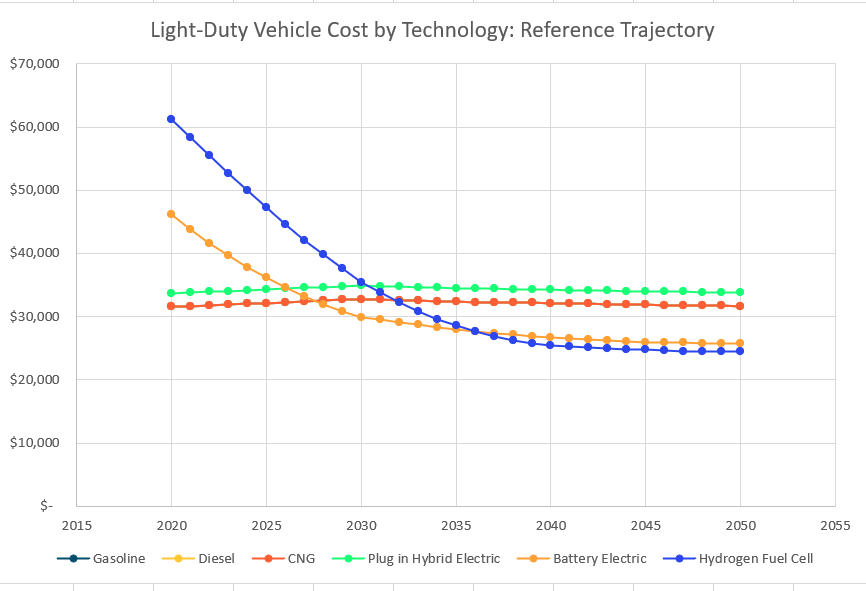 A shell game is defined as “A fraud or deception perpetrated by shifting conspicuous things to hide something else.”  In the Scoping Plan shell game, the authors argue that energy costs in New York are needed to maintain business as usual infrastructure even without decarbonization policies, but then include decarbonization costs for “already implemented” programs in the Reference Case baseline contrary to standard operating procedure to use a status quo baseline for this kind of modeling.  The documentation for Reference Case assumptions was missing in the draft documents. Shifting legitimate decarbonization costs to the Reference Case because they are already implemented and hiding the documentation fits the shifting condition of the shell game deception definition perfectly.

The deceptions of the Scoping Plan are furthered by ignoring stakeholder input that ran contrary to their narrative.  Climate Action Council Co-Chair Harris recently claimed that the stakeholder “comments, letters, and engagement have absolutely impacted this process and the plan it has produced for the better.”  I see no evidence that the Climate Action Council addressed my Integration Analysis comments on the benefits and costs evaluation or any other stakeholder comments associated with quantitative Integration Analysis issues.