Snitz Creek is falsely reported by StateImpactPA as the site of pollution problems related to Mariner East but it’s all a matter of shilling.

We don’t know if StateImpactPA “reporters” are just sloppy in their reporting, or if they intentionally lie. Either way, it doesn’t look good for StateImpactPA. PBS reporter Jon Hurdle’s latest Big Green hit piece, published yesterday on StateImpactPA, is wholly manufactured out of nothing. He claims there are continuing problems with drilling for the Mariner East 2 pipeline project at Snitz Creek in Lebanon County, PA. There are not.

Hurdle’s article (see below) claims there have been five “inadvertent returns” of drilling mud appearing on the surface where they should not appear “between Aug. 13 and Sept. 18” at Snitz Creek. There were, in fact, four such episodes, according to the list provided by the PA Dept. of Environmental Protection: 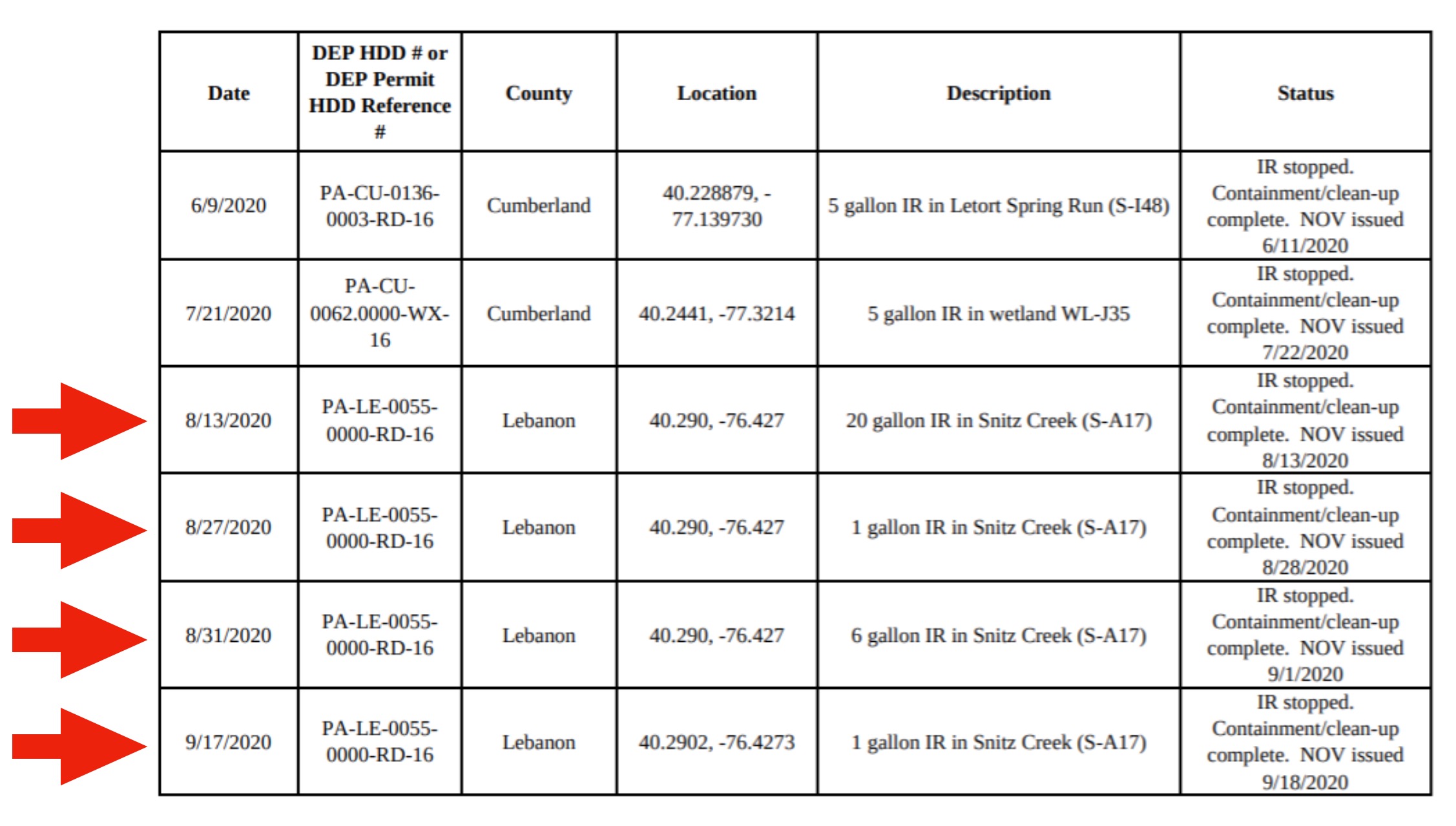 We already told you about the IR at Snitz Creek on August 13, which leaked a piddly 20 gallons. Just for context, the stuff that leaked is drilling mud (or bentonite), the same nontoxic substance used to make kitty litter, toothpaste, and lipstick. Bentonite doesn’t harm anything, unless there’s so much of it the water gets cloudy and plugs up the gills of fish or aquatic critters (i.e. suffocation).

As for the other three inadvertent returns (or IRs) since Aug. 13 at Snitz Creek, one of them leaked 6 gallons of bentonite, and the other two leaked one gallon each. Just one gallon!!! It’s nothing! And yet Hurdle’s article says there were “five” such leaks, and he doesn’t bother to list how much was leaked for any of them, implying a major release. In other words, the article is a total propaganda ploy, an effort to whip up opposition against the project. It’s journalistic malpractice, is what it is. StateImpactPA is publishing fake news.

On the basis of these “five leaks,” Big Green groups are demanding Sunoco Logistics reroute ME2 around Snitz Creek. Ain’t…gonna…happen. This is an attempt to try and stop the project from being completed by creating a controversy where there is none. A few gallons of bentonite dumped into Snitz Creek is a small price to pay to finish this highly important pipeline project. Deal with it, Big Green. Here is the disingenuous report from StateImpactPA.

The Department of Environmental Protection last month directed Mariner East pipeline builder Sunoco to find a new path for about a mile of its 20-inch pipeline at a site in Chester County, after a drilling spill of more than 8,000 gallons closed part of Marsh Creek Lake to the public.

The DEP order was the first in the troubled 43-month history of the pipeline’s construction to require a route change. It followed criticism that dozens of fines and notices of violation in response to earlier problems had done little to force Sunoco to improve construction practices.

Now, a string of spills and notices of violation at a horizontal directional drill (HDD) site in Lebanon County, at Snitz Creek in West Cornwall Township, are prompting questions about whether it’s technically feasible to run the pipeline under the creek, given the fragile karst limestone geology of the area, or whether another route for the pipeline is the only realistic option.

Sunoco reported five spills, or “inadvertent returns,” of drilling mud at the site between Aug. 13 and Sept. 18, according to the DEP’s Pipeline Portal, bringing to 12 the number of such incidents there since construction began in February 2017. In response, the DEP issued four notices of violation of two environmental laws, and told Sunoco that it could not restart the operation without approval from the department.

DEP spokesman Jamar Thrasher said the department has no rule for the number of spills that would lead to an order to reroute the pipeline. “We generally review each site on a case-by-case basis,” he said.

Chester and Lebanon counties share the karst limestone geology that creates problems for industrial projects that use underground drilling.

Sunoco did not respond to a request for comment, but the Pennsylvania Energy Infrastructure Alliance, which advocates for the industry, said that any rerouting of the pipeline would mean a further delay to the already years-late project.

“Any new route would require a major modification of the existing DEP permit,” said Kurt Knaus, a spokesman for the alliance. “This project is nearly complete, and these remaining drills are connecting parts of the line that are already finished and in the ground. What we need to do is get the job done.”

The project already carries natural gas liquids from southwestern Pennsylvania and Ohio through 17 counties to a terminal at Marcus Hook near Philadelphia, where most of it is exported. Although not all sections of its three pipes are complete, different combinations of pipe have been carrying ethane, propane and butane eastward since December 2018.

Whether the repeated failure of HDDs at Snitz Creek means that Sunoco will be required to choose a new route at that site could depend on whether it can find a way of drilling through the fragile limestone without spilling fluid.

Rich Raiders, a land-use attorney whose clients include those fighting Sunoco over the pipeline project, said DEP should already have ordered a reroute at Snitz Creek because of its karst formation.

“Lebanon County is a patchwork of karst and related fractures, and the area along that stretch of Snitz Creek is notorious for subsidence events,” he said. “I think this entire problem speaks to the limits of what an operator can do to prepare for HDD given tough geology problems.”

But finding a new route anywhere in the county won’t be easy, because the fragile underground formation extends well beyond the creek, Raiders said. “If I were DEP, I’d make them show why this is an appropriate place to put in a pipeline. If they can’t, then make them come up with an alternative that works better than this.”

Raiders, who was a member of a DEP task force on trenchless technology, said the group concluded that there are some locations where HDD “just can’t be done.”

Porous geology has caused sinkholes in other parts of the line, notably at Lisa Drive, a suburban development in West Whiteland Township, Chester County, where construction was halted after several holes opened up near homes starting in late 2018.

Concerned Citizens of Lebanon County, an activist group that opposes the pipeline, said the spills have become a pattern that Sunoco appears unable to stop.

“After each IR at Snitz Creek, Sunoco was required to stop drilling until DEP approved its restart report, then another IR occurred almost immediately after drilling was resumed, and the cycle was repeated,” the group said in a statement.

Alex Bomstein, an attorney with the environmental group Clean Air Council, said it’s time for Sunoco to consider an alternative route at the site. “Continuing to repeat the same failure again and again is not an acceptable option,” he said.

No Mr. Bomstein, it is NOT time to reroute around Snitz Creek, because there is no problem with drilling at that location. A few gallons of drilling mud is not an environmental disaster as you claim.

Editor’s Note: Jim’s analysis is absolutely correct, of course. These are totally insignificant incidents from a pollution perspective. Moreover, here is all you need to know about bentonite is this:

One must also always bear in mind StateImpactPA is nothing more than a shill for the William Penn Foundation and Heinz Endowments, gentry class snobs with all sorts of special interests and gobs of cash to advance them. They also finance the Clean air Council, the Delaware PovertyKeeper and PennFuture, along with a host of other shills who use each other to promote the elitist agenda. They’re paid to make 28 gallons of bentonite used to clarify our wine look like a flood of pollutants. They’re court-jesters and nothing more.