Solar Energy or SoLIAR Energy? Let’s Get Real About It!

[Editor’s Note: Vic Furman addresses solar energy and says it’s really soLIAR energy; a mass of lies that will only guarantee us the highest electricity prices in the world.]

The question now: Can First Solar and its smaller counterparts in the U.S. solar industry crank up enough manufacturing capacity to meet the administration’s renewable energy goals or will U.S. power companies remain dependent on the massive Chinese solar industry, despite concerns about how it operates?

The easily foreseeable answer is a resounding NO!

First Solar is one of the few U.S. solar-panel manufacturers in an industry dominated by Chinese factories, some of which the Biden administration has accused of employing forced labor. Lately, that has made First Solar particularly popular with panel buyers, which have snapped up the company’s entire production run through 2022.

And, on April 19, 2021 The Center for Strategic & International Studies reported:

Among policymakers, however, there is no moral dilemma when it comes to the question of combatting China’s forced labor practices. There is bipartisan support for legislative and executive action to sanction China and curb imports of products with forced labor in their supply chains. However, there is a practical conundrum. The U.S.—and global—solar panel manufacturing industry is dependent on a supply of cheap critical components that are made in Xinjiang, the region of China where the Chinese government has detained and oppressed the Uighur population, including through forced labor. In this situation, the Biden administration and Congress must navigate carefully to align measures against China’s human rights abuses with domestic support for the U.S. solar industry and consumer market.

How are we to interpret these tidbits of information from these two very recent articles? Here is how I see it playing out.

Remember that before President Trump took office, every past president promised “Energy Independence.” Their targets to achieve such independence, right up through Obama, were always years after their elected terms expired. Independence was not achieved until President Trump dropped the crippling and obscene regulations the other cowardly political lackeys were too scared to remove. Under Trump, we won…independence was ours as short lived as it was. It came and then, in 2020, whether an election was stolen or not, it was all thrown away.

I have written many blog posts on soliar energy and no! I am not spelling it wrong; solar is so all about solar liars.

The problem with Soliar panels being built here at home is cost. Remember all those previous solar companies that started up in the USA and then went under, including Solyandra and many more, with the loss of of billions of government dollars (your money)? The list is long.  This is why the celebration of any soliar startup in the USA is premature. Unless, of course, it given environmental exemptions to kill eagles, billions in taxpayer subsidies, outrageous tariffs on solair imports, “we” as in America, cannot compete with a nation of a billion who, without state and federal regulations, can produce and flood any soliar market with product built by slave labor.

Given the political climate and the orchestrated push for green energy one, can see why our local elected officials celebrate announcements like the Ubiquity Solar Plant, under construction on Endicott New York’s Huron Campus with a promise of 120 jobs, where once 10,000 worked for IBM. “Yee-Haw.”

I am for creating jobs and saving existing jobs but I am against soliar energy. This is because of the lies about it and so many other things that King Cuomo wore like his “new suit of clothes.” These same lies and tactics are still be used to promote supposedly green energy but no one is talking about the dramatic increases in electricity prices that will inevitably result. 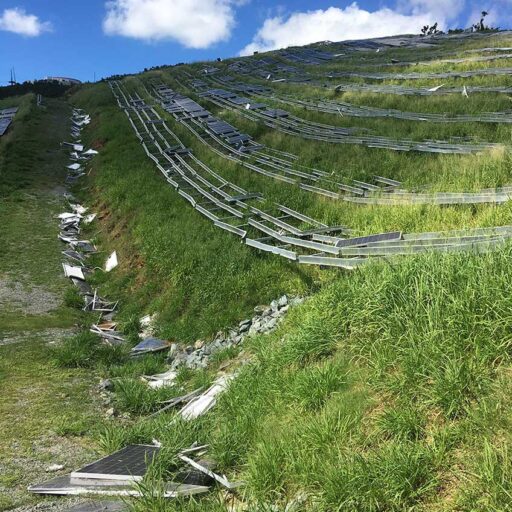 Prices are the only problem. There are many many other things left out in the presentation of soliar energy,  Like, for instance, the fact thats it is intermittent. Batteries promised as storage actually promise pollution and fires. And, what about those pictures of what the last hurricane did to solar farms in the south, ripped from their steel structures and shot through the air like war time machine gun fire, Millions were left without their soliar energy for weeks.

But, what scares me most is what all this is doing to government.  A government for green is not a government of the people in any sense of the word. It eliminates consumer choice and restricts markets so elites invested in grabbing government money can make themselves even richer and the citizens of this country will end up paying the highest utility bills anywhere in the world; which means it can’t go on forever.

Moreover, as we go green, our enemies and our allies will eagerly quench our thirst for green using fossil fuels, child labor and Hunter Biden as their energy czar. But, let me offer a word to the wise, who understand where this will all end. If you have a few hundred acres, the best soliar business is probably not a soliar farm, but a soliar dump site for expired useless panels. Toss in a few 300-feet wind turbine blades as they are not recyclable and you have an unmatched landfill opportunity. The need is already here because the soliar industry is built on a foundation lies and will ultimately crumble. Be there to pick up the pieces, an undertaker, if you will.