Solar Framing Is A Problem No Matter How One Interprets It

[Editor’s Note: Framing is a big part of solar energy; framing it as green is a fib essential to selling the idea, but framing to support the panels shows it isn’t green at all.]

The energy available to us, as well as the forms it ultimately takes, will determine our future. Therefore, I believe all energy sources are potentially important to us consumers. But, I also I believe choices determine costs and government should not be restricting our choices. Solar is one of those potential choices I am not against it, but I am very tired of the lies told to sell it. It is framed as something green, but the framing supporting the panels tells quite a different story. 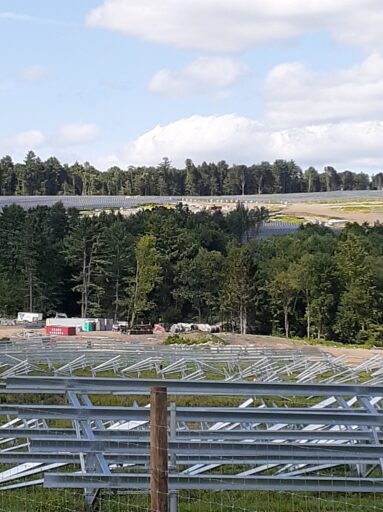 Let us explore this claim that solar is clean and will save the earth, starting with … well … the framing. The bauxite ore to make aluminum or the manufactured aluminum itself, if comes from, say, China, has to get here vis cargo ships that can consume as much as 63,000 gallons of marine diesel fuel per day to get here at 20-25 miles per hour. Do the math. LNG powered ships, of course, can reduce the impact, but…

And, who produces this aluminum? Well, here is the breakdown of the top producing counties:

And, here is what the article says about the top two producers, both of whom just happen to be our enemies:

First on this list of aluminum-producing countries is China. The world’s leading producer was once again responsible for more than half of global aluminum output in 2020. It put out 37 million MT, and also consumed a considerable amount of the metal.

China placed another 300,000 tonnes of annual smelting capacity into production in December 2020, CRU analyst Wan Ling told Reuters. Ling expects aluminum production in China to grow by another 6.5 percent in 2021.

Russia encountered its own import issues with the US in 2018. In early April, the Department of the Treasury issued sanctions on the sole primary aluminum producer in Russia due to activities between the owners and the Russian government. Those sanctions were later lifted and the treasury announced that companies could again import from Russia at similar levels to those prior to the 2018 sanctions. In 2020, 9 percent of US aluminum imports originated from Russia.

It’s not just the shipping that creates the impacts, either, or the fact are enemies tend to be our solar aluminum suppliers. Chemicals, electricity, oil and gas, as well as coal, are all used in the production of aluminum, as this story indicates:

The other major ingredient used in the smelting operation is carbon. Carbon electrodes transmit the electric current through the electrolyte. During the smelting operation, some of the carbon is consumed as it combines with oxygen to form carbon dioxide. In fact, about half a pound (0.2 kg) of carbon is used for every pound (2.2 kg) of aluminum produced. Some of the carbon used in aluminum smelting is a byproduct of oil refining; additional carbon is obtained from coal.

Because aluminum smelting involves passing an electric current through a molten electrolyte, it requires large amounts of electrical energy. On average, production of 2 lb (1 kg) of aluminum requires 15 kilowatt-hours (kWh) of energy. The cost of electricity represents about one-third of the cost of smelting aluminum.

Summation: Green energy companies are misleading us when they say going solar will save the planet. They could not produce solar without coal, oil, or other fossil fuels used in the production of the materials used in framing those ugly land destroying solar energy facilities. 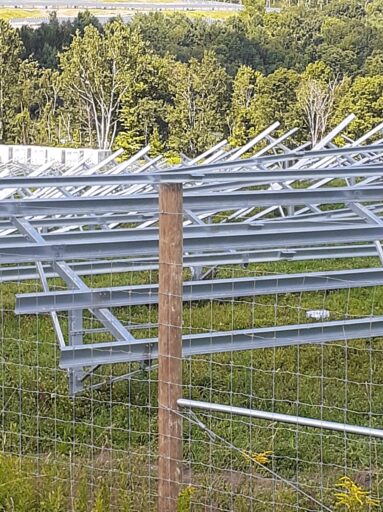 I have been watching this solar farm being constructed for two years about two miles from my home. What was once a family RV camping site with two small fields used to hold family and camp sponsored events, was loss to the retirement and sale by the owner to an investor from the city back in 2008. This was when natural gas seemed to be in the future to our state. When that venture didn’t pan out, the investor was approached by a solar company and sold the property of 100+ acres to them. To understand the eco-system destruction as well as the forever changed viewscape and loss you should check out for my first blog post on this project.

Let me frame up the situation in verse, if you will:

Where once stood tens of thousands of trees
no longer the sound of rustling leaves.
Where birds did live and multiply,
now home is lost as they fly on by.
The sounds of the forest removed tree by tree,
My God, oh God, what have they done to thee.

Where once a father and child explored,
stands now a fence nature ignored.
the promise of clean the tree did filter,
cut with the saw ground into a filler.
Where now lie the deer that graced us daily,
Habitat removed’ where was their rally?

Only in my state of legislative disfunction,
can a government tax support this destruction.
By perpetuating the lie that solar will save,
climate change by fossil; to that lie we are slaved.
From cave to cave in which we will seemingly return,
Our choices removed, we will get burned.

These solar monstrosities, made by a process anything but green, are what our leaders have chosen for us as a symbol of their phony environmentalism as they refused to give us the economic prosperity that truly clean natural gas might have delivered. We have the worst leaders imaginable.