Solar Power Could Force New Yorkers Back to the Bad Big Apple?

Blimey! Australians who have already implemented Andrew Cuomo’s solar power plan for New York are being forced to work back in the city!

Australia, or at least large parts of it, having been pursuing a green new deal for a long time now and, just like Germany, they’re now paying the price. Solar power worked to a point but now, not so much. Indeed, Australians anxious to work at home and avoid city life due to the Chinese virus, not to mention the ling commutes, are finding solar power policy is forcing them back to the city to work. Andrew Cuomo wants this for New York and one can only imagine how delighted New York city residents, exasperated with life in the big bad rotten apple that is that city today, will warm to this reality. 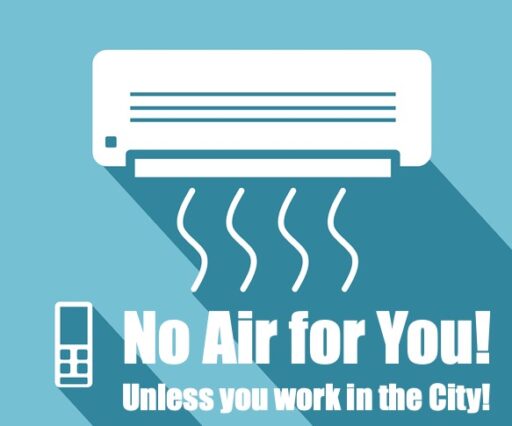 Here’s the Australian side of the story from the JoNova blog:

For years they told us to work at home to help the environment.  But thanks to a decentralized unreliable grid, Australians are now being warned that it will be a “disaster” for the grid if they stay home and work with their air conditioner on in summer.

Now we better drive to work so the solar-windy-grid doesn’t fall over:

Air conditioners could send Australia’s power grid into meltdown this summer, as roughly one third of the workforce do their jobs from home, experts have warned.

According to research company Roy Morgan, more than 4.3 million Australians are working from home…

But warmer weather has come with a warning that increased use of air-conditioning in homes could lead to more blackouts and higher electricity bills.

“Air-conditioning is what drives our maximum demand in Australia,” said Peter Dobney, the former founding chairman of the Energy Users Association of Australia.

“We can expect higher prices, in fact, I think that’s a certainty.”

After installing solar panels on one in four houses we apparently don’t want people to stay home and use them to power their air conditioners. Instead we want them to get into their cars and drive in to large office blocks which we can still afford to keep cool.

Nearly 70% of Australians drive to work, and 30% spend almost an hour getting there. The freedom to spend nearly two hours a day not sitting in traffic is surprisingly popular. But now, just as people discover  how good that can be, comes the bad news that our electricity grid doesn’t offer the freedom to turn on your air conditioner whenever you like anymore. The hours spent stuck in cars is just another kind of renewable tax.

The grand irony is that as our power becomes less centralized and less efficient, our offices have to be more efficient.  Thus decentralized power means centralized lives. Just another price of saving the Earth.

Now, consider what Andrew Cuomo is doing by forcing solar power and wind power onto New York State. He’s creating a grid scenario just like Australia. And, the logical outcome may very well be the same. That is to say Cuomo (or a future successor) may have to insist that if you want air conditioning you may have to move back to New York City; the unsafe, unhealthy big bad rotten apple world fashioned out of political correctness taken to extremes How do you suppose they’ll like ‘them apples’ after spending a fortune just to get out the place? Perhaps a natural gas powered grid will look better then.