Solar Power Is No Solution at All, But China Benefits, So…

Solar Power Is No Solution at All, But China Benefits, So…

[Editor’s Note: Solar power is a joke when it comes to reliability, cost and environmental impact but China is the big winner so, therefore, China indebted Joe Biden loves it.]

Solar power is to be the savior of President Biden’s climate agenda, being the “green” resource of choice. However, solar power has a number of unfavorable issues that limits its ability to become the savior that the Biden Administration wants.

The limits on solar that Biden is ignoring include include: 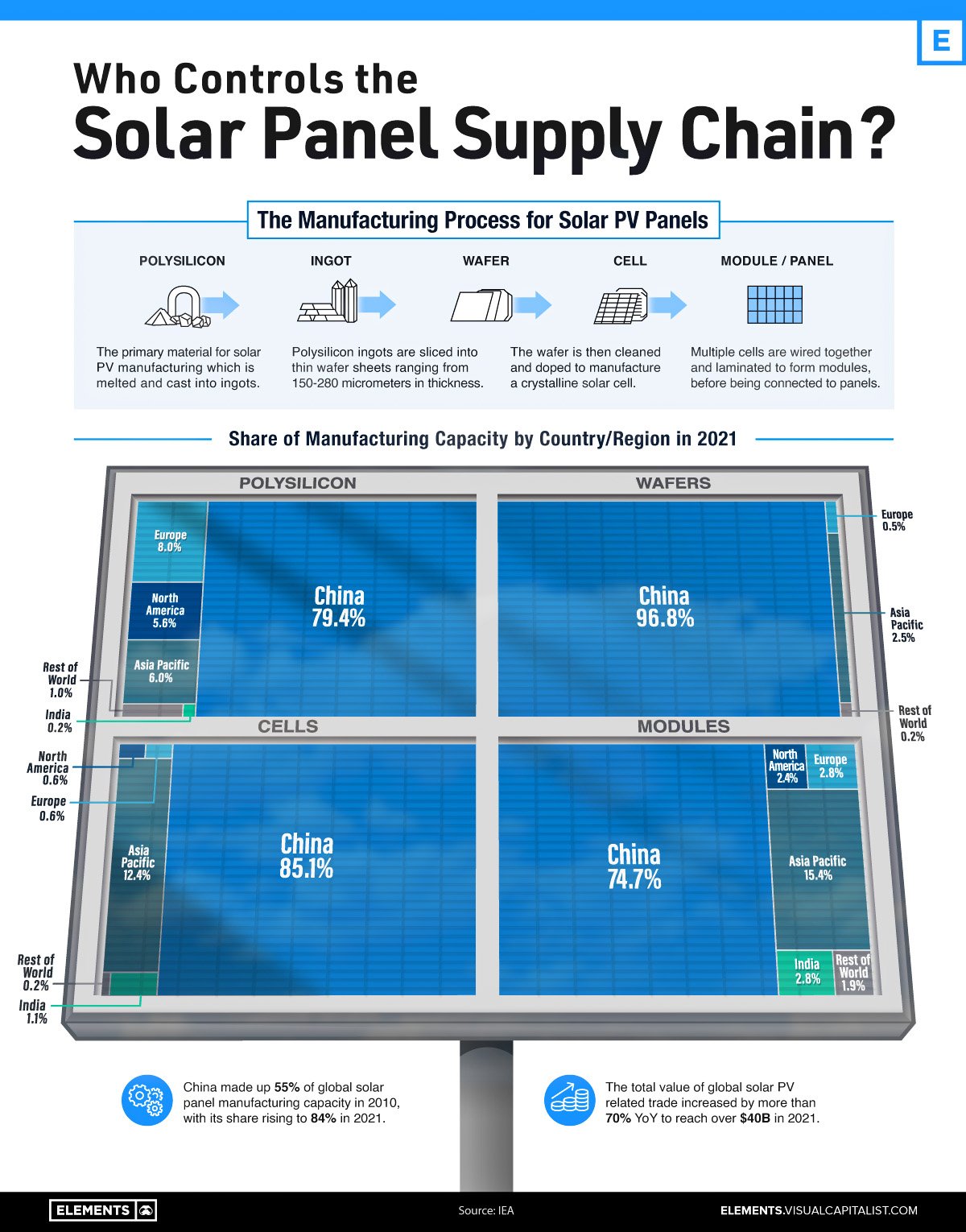 From polysilicon production to finished solar cells and modules onto panels, China has the largest share in every stage of solar panel manufacturing. China made the majority of the world’s solar panels since 2010, but over the past 12 years, its average share of the solar panel supply chain has increased from 55 percent to 84 percent. At President Biden’s targeted 500 million solar panel deployment, the United States would be purchasing 420 million solar panels from China. China also leads in terms of investment, making up almost two-thirds of global large-scale solar investment. In the first half of 2022, China invested $41 billion—a 173 percent increase from the year before.

Solar PV production is largely concentrated in the Chinese provinces of Xinjiang and Jiangsu where coal accounts for more than 75 percent of the annual power supply and benefits from favorable government tariffs. Coal generates over 60 percent of the electricity used for global solar PV manufacturing—nearly twice its share of global power generation.

In August 2016, smoke and heat near an active wildfire in San Bernardino County, California, caused a series of electrical faults on nearby power lines that triggered multiple inverters to disconnect or momentarily stop injecting power into the grid. It led to the loss of almost 1,200 megawatts of solar power—the first documented widespread tripping incident in the United States. Despite over half of the affected resources returning to normal output within about five minutes, the tripping was considered a “significant concern” for California’s grid operator.

On May 9, 2021, large amounts of solar capacity unexpectedly went offline in Odessa, Texas. The loss of solar output represented over 13 percent of the total solar capacity at the time in the ERCOT region, spanning 500 miles. While all of the solar units came back online within six minutes, the incident highlighted a persistent challenge for the power sector if renewable energy resources continue to displace fossil fuels.

On June 4, 2022, nine of the solar units that had gone offline during the May 2021 event again stopped generating power or reduced power output. The June incident was the largest documented inverter-based tripping event in the United States, involving a total of 14 solar facilities and resulting in a loss of 1,666 megawatts of solar power.

Faults can be caused by downed power lines, lightning or other, more common disturbances. The shut-off response by inverter-based resources was meant to prevent equipment from getting damaged. It had little consequence for the grid as a whole when renewables made up a small portion of the grid. But, Biden’s climate agenda makes it a much more serious problem that the industry and regulators are not currently treating with the urgency it deserves.

Solar panels are mostly made of glass, which has low value as a recycled material, and silicon, silver, and copper as well as heavy metals (e.g. cadmium, lead) that some governments classify as hazardous waste. Hazardous waste can only be transported at designated times and via select routes. Because solar panels are delicate and bulky, specialized labor is required to detach and remove them to avoid shattering and polluting local areas where they can leach into the soil.

The International Renewable Energy Agency (IRENA)’s official projections indicate that “large amounts of annual waste are anticipated by the early 2030s” and could total 78 million metric tons by 2050 based mostly on a 30-year life cycle for the solar panels. According to the Harvard Business Review, the volume of solar waste is expected to surpass that of new installations by 2031. By 2035, discarded solar panels could outweigh new units sold by 2.56 times, increasing the levelized cost of solar energy, a measure of the overall cost of an energy-producing asset over its lifetime. According to the Harvard Business Review, the levelized cost of solar could be four times the current projection when solar waste is factored into the calculation.

There are a number of issues related to solar power development that the Biden administration is not addressing. They include its true cost including the cost of back-up power from other generating sources or batteries and the cost of disposal, its potential for tripping the electric grid, and the future dependence on China for solar panels and their components. China supplies the world with at least 75 percent of every stage of solar manufacturing and processing, which should immediately be a flag that President Biden’s climate agenda will make the United States dependent on China for energy—a very depressing and volatile situation as the United States learned from experience when it was dependent on the Middle East for oil.  As the United States and the rest of world economies build out their solar energy capacity, will they avoid repeating Europe’s mistakes of energy import overdependence when it comes to the materials and manufacturing of solar energy infrastructure?  These are questions to which the American public deserves answers.