Solar Project Denied in New York? Say It Ain’t So!

Solar Project Denied in New York? Say It Ain’t So!

[Editor’s Note: New York’s siting board actually turned down a solar project but it’s all for show and because the developer apparently wanted still more favors from the state..]

I have described several New York Office of Renewable Energy Siting (ORES) solar project application decisions and was all but certain that no project would ever be rejected.  On August 9, 2022 the The New York State Board on Electric Generation Siting and the Environment (Siting Board) denied approval to North Side Energy Center, LLC (North Side) to build and operate a 180-megawatt solar farm in St. Lawrence County.  This post describes the decision.

New York’s Climate Leadership and Community Protection Act (Climate Act) Act establishes a “Net Zero” target (85% reduction and 15% offset of emissions) by 2050.  I have written extensively on implementation of the Climate Act.  Everyone wants to do right by the environment to the extent that efforts will make a positive impact at an affordable level.  My analysis of the Climate Act shows that the ambitions for a zero-emissions economy outstrip available renewable technology such that the transition to an electric system relying on wind and solar will do more harm than good.  The opinions expressed in this post do not reflect the position of any of my previous employers or any other company I have been associated with, these comments are mine alone. 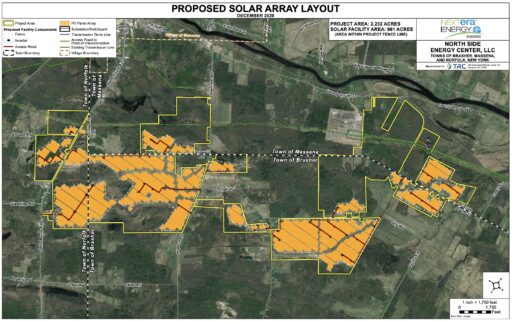 I prepared a detailed description of the New York permitting process in a recent post so I will not repeat all that information here.  In brief, in order to expedite the permits for wind and solar projects New York State has established the Office of Renewable Energy Siting (ORES) which is housed within the Department of State.  ORES has the authority to over-rule any local objections to renewable projects if they are unduly burdensome.  To this point all the projects proposed have been approved.

I have been writing about problems associated with utility-scale solar development in New York based on input from readers of my blog.  In my opinion if you are going to develop solar on the scale proposed in the Climate Act, then there should be a plan for responsible siting. My recent post on another solar project included background information for New York solar development.  The takeaway message is that New York has not implemented any kind of a policy that protects prime farmland or addresses responsible solar siting for utility-scale developments.  Frankly I was beginning to think that no solar development project would ever be rejected.

North Side Energy Center is being developed by a subsidiary of NextEra Energy Resources, LLC.  NextEra Energy Resources is the world’s largest generator of renewable energy from the wind and sun. According to their website, the company has been investing in clean energy for more than 25 years and has a track record of safely building and operating renewable energy centers.  The docket for the application is available here.

According to the Order denying the application:

The Project as proposed would generate up to 180 megawatts (MWs) of solar energy and would consist of commercial-scale solar arrays in a tracker racking system of approximately 8 to 13 feet, but as much as 18 feet, in height. The Project also includes inverters and other components; approximately 7 miles of access roads with widths between 12 and 20 feet; parking, materials and equipment laydown, and construction staging areas; approximately 33 miles of buried and overhead electric collection lines; a collection substation covering approximately 2.2 acres of currently forested land; electrical point of interconnection facilities; an adjacent 230 kilovolt (kV) switchyard; transmission lines; and chain-link fencing seven feet in height around the entire Project.

The press release for the project denial states:

The Order explains the rationale for the disapproval:

After a thorough and complete review of the project and its impacts, the Siting Board denied the application because the adverse environmental impacts associated with construction and operation of the project, specifically impacts to wetlands and threatened and endangered species, have not been minimized or avoided to the maximum extent practicable, as required by law. In addition, the project developer was unable to demonstrate it would comply with applicable State environmental laws related to wetlands and threatened and endangered species.

The presence of several threatened and endangered species, as well as species of special concern in the project area, is not disputed by North Side. The species observed on the site include: Endangered: Short-Eared owls and Golden Eagles; Threatened: Blanding’s Turtles, Northern Harriers, Sedge Wrens, Upland Sandpipers, and Bald Eagles; and Species of Special Concern: Vesper Sparrows, Grasshopper Sparrows.

I have been involved with environmental permitting applications for years.  One of the cardinal rules is to avoid wetlands as much as possible.  It is amazing that the developer thought that they could get a permit for a project that impacted more than 500 acres on a project footprint of 1,200 to 1,400 acres.  Apparently, the word is out that New York is wide open for development and NextEra thought they could get away with it.

Of the overall 2,241-acre Project Area assessed. The Applicant states that approximately 35 percent (781.5 acres) will be used for Project Components within a fenced area of 980.7 acres to generate 180 MW of renewable energy.  The Applicant also states that the remaining land outside of the Project’s fenced area will remain under its existing uses. The Project is sited within mapped Agricultural Districts. One hundred twenty-one (121) acres of soil within the Project Area are classified in mineral soil groups 1-4. Similarly, 82 acres of the lands classified as Prime Farmland are proposed to be impacted withing the 1,100-acre Limits of Disturbance.

The Department’s goal is for a project to limit converting agricultural areas to no more than 10% of mineral soil groups 1-4 classified by the Department’s NYS Agriculture Land Classification, which the Department has identified as New York State’s most productive farmland.

In this case, the Applicant has met the Departments’ siting policy in that the settlement layout and does not propose to impact more than 10% of agricultural lands comprised of Mineral Soil Groups 1-4, as described by the NYS Agricultural Land Classification.

One amusing aspect of the State’s description of the decision was the apologetic tone of the press release.  First was the caveat that they have been approving projects:

Then the description claimed that the State tried to get the developer to make changes thus deflecting blame:

It’s important to note that significant efforts by State agency parties were made throughout the review process to have the developer change the project to reduce the impacts on wetlands and endangered species, including by reducing the size of the project. The developer can seek rehearing and appeal the Siting Board’s decision or file a new application.

While it is encouraging that the State did deny the application for a renewable project it is important to note that the application was incredibly arrogant.  The idea that a project that a project that impacted 500 acres of wetlands (over a third of the disturbed area in the project!) would be approved should have been rejected out of hand by the developer.  That NextEra thought they could get away with it speaks volumes about the impression that outside of the state developers have about New York solar siting.

Unfortunately, there is no sign that ORES is concerned about the effect of massive utility-scale solar development on New York’s agricultural industry in general and on the loss of prime farmland in particular.  Until such time that utility-scale solar is required to meet the New York Department of Agriculture and Markets guidelines for responsible solar siting irresponsible solar developers like NextEra will continue to destroy prime farmland.