[Editor’s Note: Rules of wokeness ever evolve. Yesterday’s pet cause is tomorrow’s dog to be kicked away and solar stooge Kathy Hochul is now kicking away farmland preservation.]

I have written enough articles on solar siting issues that I have setup a page that summarizes them all.  The original intent of this blog post was to announce the addition of a scorecard documenting the loss of prime farmland allowed by the Hochul Administration’s solar siting policies.  However, one of the latest solar project approvals was for a project that proposes to build on marginal farmland proving that it can be done so I have added a description of that project.

New York’s Climate Leadership and Community Protection Act (Climate Act) Act establishes a “Net Zero” target (85% reduction and 15% offset of emissions) by 2050.  I have written extensively on implementation of the Climate Act.  Everyone wants to do right by the environment to the extent that efforts will make a positive impact at an affordable level but the current implementation policies are doing more harm than good.  The opinions expressed in this post do not reflect the position of any of my previous employers or any other company I have been associated with, these comments are mine alone. 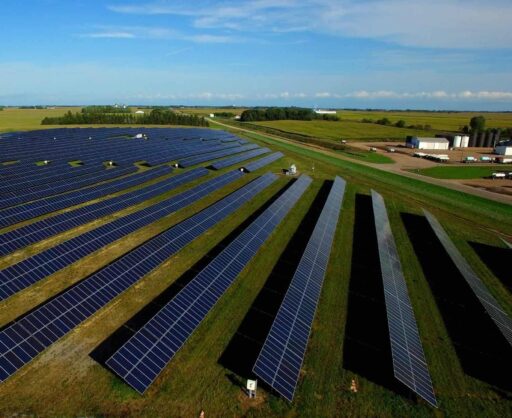 I became aware of the particular issues of utility-scale solar development on agriculture after I had a couple of people contact me describing issues that they had and suggested that I look into the issue.  The problems that they raised are real, solutions to mitigate problems are available, but in the rush to develop as many renewable resources as quickly as possible the State of New York has dropped the ball on responsible utility-scale solar development.

Given the massive amount of projected utility-scale solar generation capacity required to meet Climate Act goals the rush to develop solar projects could easily lead to the permanent loss of significant amounts of prime farmland that will hurt farming communities and endanger Climate Act strategies to sequester carbon in soil.

The New York State Department of Agriculture and Markets (DAM) has guidelines for solar developments.  In prepared testimony Michael Saviola explained: “The Department’s goal is for projects to limit the conversion of agricultural areas within the Project Areas, to no more than 10% of soils classified by the Department’s NYS Agricultural Land Classification mineral soil groups 1-4, generally Prime Farmland soils, which represent the State’s most productive farmland.”

In order to document the State’s irresponsible solar siting policies, I have developed a scorecard to track of the loss of prime farmland.  I used Exhibit 15: Agricultural Resources in the solar project permit applications for the data. A list of applications is available at the New York State Office of Renewable Energy Siting that references the docket for each permit.  I have tried to accurately represent the project area, project footprint, and the area of prime farmland in each permit application but the applications do not use the same terminology so my interpretations might be inconsistent.

The following scorecard table lists the project names and the permitting authority.  The original power sector permits were handled by the Department of Public Service Article 10 process but now the state rams over-rides any local concerns with the New York Office of Renewable Energy Siting (ORES).  The table lists photovoltaic capacity (MW) for each project.

My interpretation of the project area is that it represents the land under contract to the project developer for locations being evaluated for placement of project facilities, including the proposed collection substation and interconnection facilities.  I interpret the Project Footprint as only the area of the project components.  All the applications are required to include an exhibit for agricultural resources that specifies how much of the project area and footprint are soil types that are defined as prime farmland.  Mineral Soil Groups 1 through 4 are considered to be highly productive soils by DAM.

I calculated the Percentage Prime column as the sum of the prime farmland soil categories divided by the Project Area to compare with the  DAM goal for projects to limit the conversion of agricultural areas within the Project Areas, to no more than 10% of soils classified as Prime Farmland soils.

Update: The latest Update of the Scorecard is available here.

At this time, there are seven approved projects that have accessible Agricultural Resources exhibits (Homer Solar’s exhibit is unavailable).  Six of the seven projects exceed the DAM goal for limited conversion.

I should also note the DAM has made the point that once this land is converted to industrial solar panels that is unlikely that it will be converted back to farmland simply because the need for solar power will never go away as the Climate Act net-zero goals are implemented.  The developers piously claim that the most of the project footprint can be converted back but I side with DAM that this is a transparent excuse of no value.

The solar development scorecard lists a total of seven applications that have been approved for a total of 1,339 MW.  The total project areas cover 17,430 acres and the project footprints total 7,912 acres.  Despite the best efforts of Department of Agriculture and Market staff to prevent the loss of Prime Farmland, these projects were approved and the prime area lost for farming in these projects totals 4,216 acres or 24% of the combined project areas.

In early January Governor Hochul announced approval of siting permits for three major solar energy centers including Tracy and Riverside.  Frankly, I was wondering if any industrial solar development would propose to develop land that met the DAM 10% goal so I was pleased to see the Tracy application.  It is possible to develop solar facilities on marginal farmland.

I think the Agricultural Resources exhibit descriptions of the Riverside Solar and Tracy Solar projects are instructive.

In the absence of a state policy for responsible solar siting, out-of-state developer AES  can come in with these lame excuses and take another 292 acres of prime farmland out of production.  The referenced Table 15-4 is nearly six pages of individual soil types without a summary listing.  I interpret the obfuscation relative to the relevant prime farmland statistics to mean that they know full well just how inappropriate this application is.

On the other hand, the EDF Renewables Tracy Solar project clearly defines their impacts to agriculture: 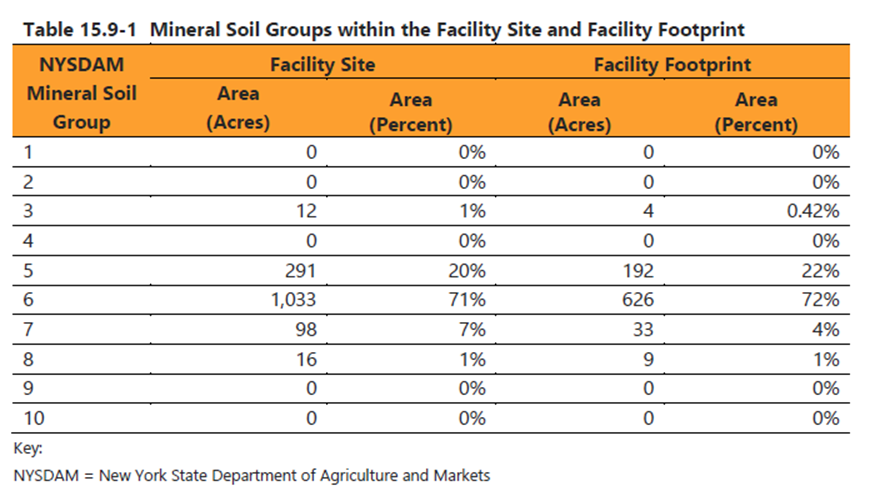 It is apparent that the Tracy Solar project has proposed to install solar panels on marginal farmland.  Surely this is an example that should be the standard for all future development.

The implications of these two projects does not reflect well on the New York State solar siting requirements. The Tracy Solar projects shows that marginal farmland can be used for solar panels. As it stands now solar developers are free to come into the state and put up as many solar panels as they want on as much prime farmland as they want in direct contravention of DAM goals.

In addition, there are no solar capability standards so developers are free to install fixed panel racking systems that cost less but do not meet the capacity expectations of the Scoping Plan.  The state has not updated its cumulative environmental impact assessment for the larger renewable energy capacities in the mitigation scenarios so the full consequences of the necessary 40,000 MW of solar development are unknown.

I submitted a comment to the Council in March calling for a moratorium on utility-scale solar siting in March that was ignored.  The most frustrating part to me is that the State has instituted responsible solar siting guidelines in the policy option roadmap for the proposed 10 GW of distributed solar development.  The failure to simply require those requirements for utility scale solar developments is baffling.

Until the Hochul Administration institutes responsible utility-scale solar siting guidelines similar to the roadmap for distributed solar development there will be significant and irreplaceable loss of Prime Farmland and damage to farming communities across the state.