…
[Editor’s Note: Solyndra sort scams and schemes are springing to life again under Joe Biden who only knows how to copycat Obama’s green failures.]

For example, in 2009, Vice President Biden announced that Solyndra would receive hundreds of millions of taxpayer dollars that were lost because of its bankruptcy and eventual demise. Instead of billions of dollars, Biden wants to spend trillions of dollars on new “clean energy” projects and another “Cash for Clunkers” program that failed to achieve its goals during the Obama administration. Biden is also signing executive orders that serve to hurt the oil and gas industry and the numerous jobs that it creates, which is one of the few success stories from the Great Recession.

Under the Obama administration, the Recovery and Reinvestment Act of 2009 invested $90 billion for green jobs training and loan programs, and almost $3 billion more for subsidies for the purchase of new vehicles through the Cash for Clunkers program. These programs resulted in very few actual jobs created, failed stimulus programs, and billions of dollars wasted in green projects like Solyndra, A123 Systems, and California’s bullet train.

And despite the failures, President Biden wants to invest hundreds of billions of taxpayer dollars in new green job training programs, new green energy financing, increased high speed rail, and new electric vehicle subsidy programs. In fact, the program spends $115 billion on roads and bridges and upkeep, while it includes $174 billion to promote electric vehicles and EV charging stations, $80 billion for public transit, and another $80 billion for railroads.

In contrast, a bright spot of the recovery from the Great Recession was the oil and gas industry. By the end of 2013, non-farm employment was an anemic 1.9 percent higher than it was at the end of 2009. On the other hand, the oil and gas sector’s employment was 16 percent higher. This strong jobs output helped make the United States the world’s leading producer of oil and gas. Yet, Biden has signed an executive order to stop the construction of the Keystone Pipeline, ending the prospect for roughly 11,000 American jobs in 2021 alone. He has also implemented a moratorium on new oil and gas production on public lands that if made permanent could cost one million jobs and jeopardize nearly $10 billion in revenue. Already oil and gas jobs have declined as the following chart shows. 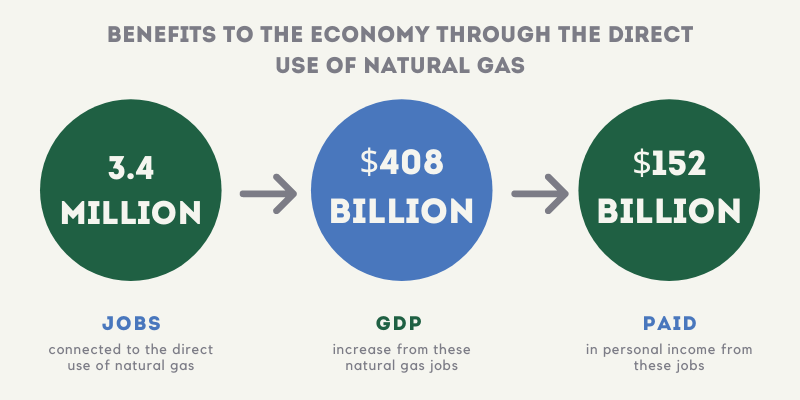 President Biden and his climate czars, Gina McCarthy (domestic) and John Kerry (international), are trying to assure us that there will be “green energy” jobs to replace those of fossil fuels. By 2029, however, the Bureau of Labor Statistics (BLS) expects solar and wind turbine technician positions to grow by a combined 10,400 new jobs, which pale in comparison to the 37,400 new oil and gas jobs BLS expects over the same time span, as long as Biden does not get in the way. Further, the salary differences between these jobs is immense and job relocations are likely to disrupt the families involved. 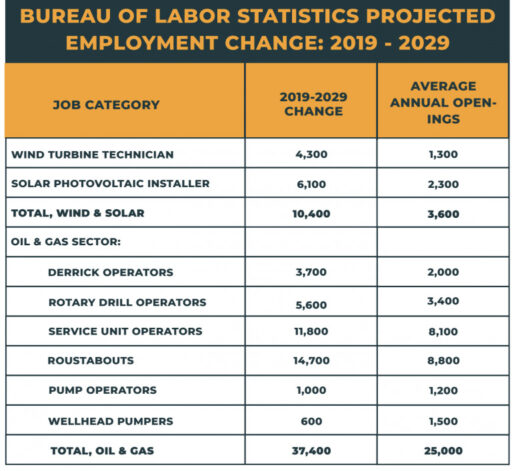 On January 27, 2021, Biden signed an executive order suspending oil and gas leases on federal lands and waters. Western U.S. states have a large portion of their total production occurring on federal land. The Bureau of Labor Management estimates that in FY 2019, oil and gas activities on federal lands supported 318,000 jobs (compared to 9,000 for renewable energy) and were responsible for almost $76 billion in economic output.

Together, the states in the table make up over 95 percent of all the federal onshore crude oil and natural gas production in the United States. Restrictions on production from federal lands will therefore have disproportionate economic and budgetary impact on these states, which depend on disbursements from this production to fund schools and other government functions.

Oil production on federal land in 2019 made up about one-fifth of total oil production in the United States and 13 percent of natural gas production. 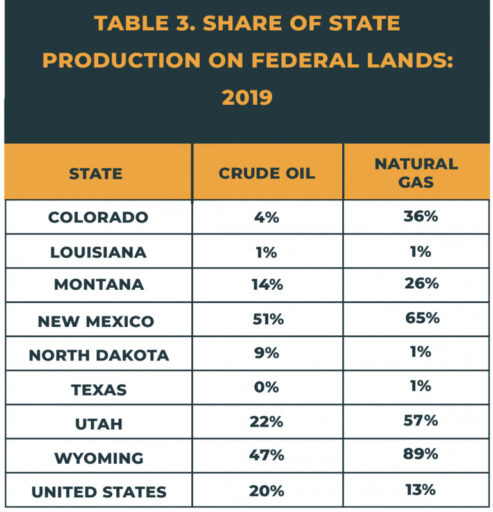 According to BLM, Pre-COVID FY 2019 revenue from oil and gas leases on federal land were $9.7 billion (vs. $410 million from wind), and total revenues from all resource extraction activities were $10.9 billion. Thus, oil and gas production accounted for about 90 percent of revenues from federals lands. If the $414 million from coal mining is added, 94 percent of revenues were from fossil fuel extraction.

The Obama-Biden administration backed commercial enterprises through loan guarantees and other financial instruments using taxpayer funds authorized by the American Recovery and Reinvestment Act (ARRA) that led to some major failures. The most famous of these is Solyndra, a manufacturer of solar panels that received nearly all of its allotted $535 million Department of Energy (DOE) loan and filed for bankruptcy in September 2011. More than a thousand workers lost their jobs.

After Solyndra, other companies started to fail. A thin-film solar manufacturer, Abound Solar, that received a DOE loan guarantee for $400 million called it quits in June 2011 after laying off 70 percent of its workforce four months before. Another solar company, First Solar, received money from DOE’s loan guarantee program—garnering over $3 billion, which it eventually sold to third parties and then let go 30 percent of its workforce.

Beacon Power, a flywheel storage company that received $43 million in stimulus loan guarantee, declared bankruptcy in October 2011. Ener1 received a $118.5 million grant to build a battery manufacturing plant and declared bankruptcy in January 2011. A123 Systems, a battery manufacturer, which accessed $132 million of a $249 million stimulus grant from DOE in loan guarantees to refurbish two Michigan plants plus other projects before it, declared bankruptcy and was later purchased by a Chinese company in a deal approved by the Obama-Biden administration. Fisker Automotive, a Finnish electric car manufacturer, which drew down $200 million of a $529 million loan to design a mid-priced electric vehicle and build a factory had its funding froze by DOE in May 2011.

The most recent failure occurred last year when Tonopah Solar Energy LLC, the owner of a solar-thermal generating plant that received $737 million in DOE loans, filed for bankruptcy in July 2020. The troubled plant never generated anywhere near its capacity and its technology proved unreliable and costly. At the time of bankruptcy, the company still owed $425 million on its loan, about $200 million of which DOE will get under a settlement.

Congress set aside almost $3 billion in vouchers for the “Cash for Clunkers” program, which began in July 2009. The program provided people a credit of up to $4,500 to trade in vehicles getting less than 18 miles per gallon to buy a new vehicle with a fuel economy rating at least 25 percent better than the CAFE benchmark for that vehicle class. $2.85 billion of the $3 billion Congress budgeted was spent. Studies found that the program did not stimulate the economy and did not lead to greater employment, but instead subsidized purchases that would have been made anyway. In addition, it hurt used car sales because vehicles were required to be destroyed which may have been purchased by willing buyers and reduced the contribution of vehicles to charities.

California’s bullet train was another failed program, which was an Obama administration stimulus initiative. The Federal Railroad Administration provided about $3.5 billion in federal stimulus money and a railroad improvement grant to the California High-Speed Rail Authority in 2010 and 2011. The original plan was to connect San Francisco (population 4.7 million) and Los Angeles (pop. 13.2 million) by way of California’s Central Valley. The original budget was $35 billion, most of which would have come from California taxpayers.

In 2019 when, faced with runaway project costs, California Governor Gavin Newsom announced he was derailing the original project except for the Merced (pop. 280 thousand) to Bakersfield (pop. 900 thousand) leg, which allows him to avoid California paying $3.5 billion back to the federal government. Despite this failure, about $20 billion from the Biden “infrastructure” package is for intercity passenger rail, which could include California’s bullet train.

The Obama-Biden administration devoted $500 million to green training programs. In September 2011, job placement was at only about 10 percent of the desired level, with very low (2 percent!) retention rates. In 2013, a follow-up report also uncovered a low retention rate (16 percent) and half of those who completed training “were incumbent workers, meaning the participants were already employed when they entered the program.”

The American public is being set up by the Biden administration as he has requested trillions to pay for programs similar to those that failed during the Obama-Biden administration. And, to make matters worse, he is writing executive orders that damage the oil and gas industry where job growth was the largest after the Great Recession and which resulted in energy independence for the United States—something that the U.S. was trying to achieve for decades. Instead, the United States will be dependent on China for either green technologies or their parts and be trillions in debt. And, because of the diversion of money from traditional infrastructure like roads and bridges, there is little hope that the “infrastructure bill” will help improve transportation.