[Editor’s Note: The Spire STL Pipeline story shows it is easier to get business through government largess and political corruption than to earn it through simple competition.]

‘The $287 Million Pipeline No One Needed’

This was the title of an article published on April 27, 2022, by Mario Ariza in The Intercept; “an award-winning news organization dedicated to holding the powerful accountable through fearless, adversarial journalism.”

The article was apparently underwritten by ‘Floodlight News,’ (“a nonprofit climate newsroom that investigates the powerful interests stalling climate action”), syndicated and picked up by similar “news” web sites. According to LinkedIn, Mr. Ariza’s technical credentials include being a “Michener Fellow in Creative Writing, Poetry, a Master’s in Hispanic Cultural Studies and a Bachelor’s in Political Science. 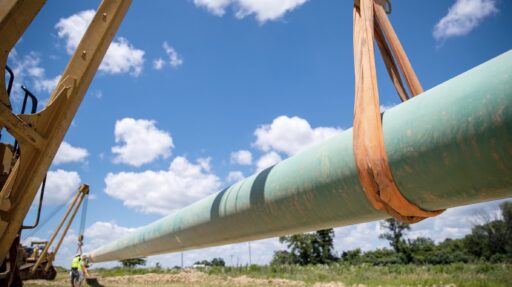 The article started out as a hit job about Spire’s STL Pipeline in praise of the the Environmental Defense Fund’s (EDF) litigation against the Federal Energy Regulatory Commission (FERC) approval of STL. His piece quickly became an essay about how the gas utility industry, and the American Public Gas Association (APGA) in particular, is striving to undermine carbon emissions objectives of the Biden Administration.

Then journalist Ariza ends up hitting on me. Thus, I proudly join the ranks of Robert Bradley, Alex Epstein, Tom Tanton and many other free-market and free-thinking opponents of the “environmentalist deep state.”

The gist of the article:

Spire’s story is an inside look at how American energy giants are endeavoring to remain relevant in a world questioning the usefulness of gas as compared with an all-electric system powered by renewable energy.

Ariza also mentions Gas groups sue to block DOE efficiency rule  (which I coordinated before retirement from Spire in February of last year).

On January 27th of this year, I provided some background information about this litigation in the final segment of a four-part series regarding “energy efficiency” policies under the Biden Administration: Mark Krebs on Energy Efficiency under Biden’s DOE (Part IV of IV: More Issues). Scroll down to “STL Pipeline Issue” for that full discussion, but here is an excerpt:

I think this situation represents a new tactic to suppress consumer preferences for using natural gas. But again, it is mainstream environmentalists promoting electrification as a “no holds barred” means of preventing catastrophic AGW. And again, contrary to their propaganda, this will inflate both taxes (that subsidize “clean” energy) and energy bills. They (apparently) believe that increasing gas bills will make it easier for consumers to accept electrification. In this case, the Environmental Defense Fund (EDF) is implementing part of their business model to entrench themselves into utility operations and force EDF’s environmental objectives. I have experienced it before.

The Natural Resource Defense Council is also mentioned by Ariza:

“Spire is not an outlier, it’s an extreme example of a pattern,” said Gillian Giannetti, a senior attorney at the Natural Resources Defense Council.

It would have been more factually precise for Ariza to disclose that Giannetti is an attorney for NRDC’s “Sustainable  FERC” that EDF is affiliated with. Their objectives include:

Ariza expends considerable effort discussing the gas industry’s war against electrification. While some profess that “electrifying everything” is necessary as soon as possible to avoid the worst consequences of anthropogenic global warming, others profess electrification is more like the energy equivalent of ethnic cleansing.

I admit to being closer to the latter. I’ve witnessed the electrification onslaught for decades. (Yes, electric utility industry trade associations have pursued the mission of an electric energy monoculture for that long.) And the Biden Administration is their partner today.

Ariza’s piece goes on to discuss a regularly scheduled conference put on by the Electric Power Research Institute (EPRI):

In February 2018, Krebs organized members to attend an [sic] conference about electrification to gather intel from the competition.

True, but what is different than the high level of cooperation between electric utilities and environmentalists to phase out the direct use of natural gas by ostensibly renewably powered electricity?

While cloaked in helping the planet, however poorly, consumers lose the leading alternative to electricity—by design. The 4-day conference I attended in 2018 featured many speakers representing NRDC and the like, but only one (ridiculed) representing gas utilities.

Nor does the article disclose a formal agreement exists between electric utilities and environmentalists to achieve their joint electrification objective.  The 2018 conference also featured many speakers representing the Department of Energy (DOE) and its “national labs.” But achieving an electric energy monoculture is decades older–at least 1988 by ads evidenced in this book.

Why is all this happening? For gaining market share and consumer control.  Without natural gas to compete against electricity, electric utilities stand to multiply their size and they have more backup for when renewables are down without having to worry about being first “curtailed” during extreme weather events (to ensure consumers are curtailed last).

And once the “competition” from consumer alternatives to electricity are eliminated, then smart metering can step in to control consumer behavior. There is also considerable “empire building” (a.k.a., “mission creep”) taking place that drive DOE and its labs.

On April 19, The U.S. Supreme Court denied Spire Inc.’s appeal of a lower court’s decision that the natural gas utility’s Spire STL pipeline should have never been in operation. The high court declined to hear the appeal without comment, according to the St. Louis Business Journal.

A review of FERC Docket CP17-40-007   (entered into the search docket box) for the STL Pipeline reveals little is happening to end to this fiasco except for a list of monthly “Corrective Action Status Reports” that update FERC on Spire’s attempts to work with landowners. A St. Louis Post Dispatch article from February 2nd, 2022 indicates that this situation will languish another year:  Debate over Spire’s STL pipeline will drag out for another year, company says.

For the record, I filed comments under this docket as a Spire customer.  These can be down loaded here: https://elibrary.ferc.gov/eLibrary/filelist?accession_number=20211115-5021

FERC has bigger problems right now than STL Pipeline.  Basically, per Biden’s Executive Order for all agencies to implement programs to mitigate climate change, FERC is being “woke” into a political/environmental regulator instead of an economic regulator per their charter. This expanded role is being challenged by Federal legislators.

The environmentalists’ paradigms are likewise challenged. This sort of yellow journalism attack on me is symptomatic of that and provides evidence that I must be doing something right.  I welcome it as it represents at least a flawed facsimile of much needed debate.

Finally, it is rumored, but not confirmed, that some electric utilities are beginning to consider the extreme difficulties of adding the infrastructure for widespread electrification with “clean energy.” These difficulties are especially true for serving peak heating loads with electricity during cold weather extremes.

Proponents should also consider the social ills associated with “clean energy.” For example, natural gas does not employ Congolese 5-year-old children to hand-mine cobalt or persecuted Chinese ethnic minorities to make solar panels or making the land toxic from lithium extraction and processing.

A 65-mile, 400 MMCf/d pipeline approved by FERC and in service since late 2019 has been challenged in court by environmental groups that want to wean St. Louis off natural gas to force electrification. With the D.C. Circuit ruling against FERC, and the U.S. Supreme Court declining to reverse, FERC has issued an emergency order for Spire STL to continue operation (not shut down).