State Of American Energy 2023: The Solution is Here

The American Petroleum Institute’s 2023 State of American Energy on Wednesday outlined three areas where sound policy could “make, move, and improve American energy,” making clear the resounding theme that “The Solution is Here” for energy security and economic growth.

We must secure America’s energy independence.

All of the above energy strategies provide us the benefits of affordable, reliable, and clean sources of energy to power our communities.

API President and CEO, Mike Sommers, emphasized that amidst a global energy crisis, America holds the key to rectifying global supply and demand, as well as stabilizing global energy markets. The United States can do this by meeting rising energy demands, fixing supply and production imbalances, and removing federal land leasing constraints, all while reducing carbon emissions.

“The need for sound energy policy has never been more critical. American energy leadership is vital, perhaps more than ever for our own prosperity and security in uncertain times, and for the world. A global energy crisis – driven by surging post-pandemic demand outstripping supply and exacerbated by Russia’s invasion of Ukraine – has shown that the world needs more natural gas and oil, not less.” (added emphasis)

Below are a few of the key solutions API poses to America’s energy challenges from this year’s report:

Currently, natural gas and oil production are falling short of fulfilling global demand, resulting in many countries, including the United States, releasing oil from strategic reserves to cover shortages in an attempt to artificially lower gas prices. EID has covered this drawdown in the past, when the SPR reached its lowest level in decades. Despite these realities, the Biden administration has leased fewer federal land acres for oil and gas drilling since the 1940s. These constraints are detrimental to domestic oil and gas production. 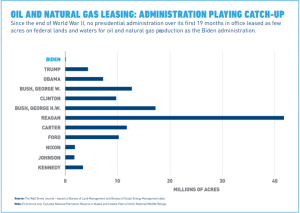 While America remains a global leader in oil and gas production, the country has the reserves to meet rising global demand. A recent Rystad Energy study showed that removing restrictions on federal lands and waters development has the potential to produce an additional 395 million barrels of oil equivalent through 2035.

API also makes clear that a lack of sufficient critical infrastructure improvements and developments will further hinder domestic oil and gas production for decades to come.

“Today, it often takes more time to acquire a permit for a project than to build one. This hurts families, businesses, the environment, and our strategic partners around the world.” 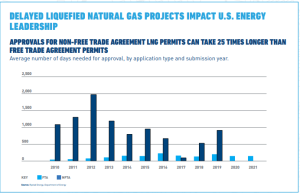 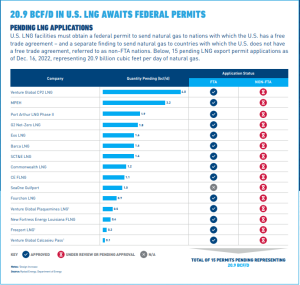 To combat these inadequacies in governmental regulations, API suggests:

#3 Continuing Innovating to Lower Carbon Emissions and Protech the Environment

API also emphasized how the oil and natural gas industry is rising to the challenge of ensuring reliable, abundant, and affordable energy – all while decreasing greenhouse gas emissions. Various refiners, producers, and operators across the energy value chain have committed to reducing emissions through implementing lower carbon technologies: the reality is American energy is produced using some of the most stringent environmental standards in the world. 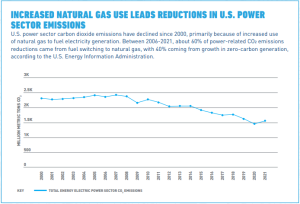 “If we ignore skyrocketing global energy demand, countries that have little or no regard for the environment will be happy to meet that demand for us. And they’ll met it with sources like wood and coal and the higher emissions that come with them.”

While the American oil and gas industry is committed to voluntarily implementing cutting-edge environmental standards and technologies to lower carbon emissions through innovation, rather than regulation, API outlined additional government actions that could further drive reductions:

Bottom Line: 2022 presented unprecedented challenges for the oil and gas industry; however, with sound, energy-forward governmental policies, the American energy industry is positioned to meet global demand, while reducing greenhouse gas emissions. The fact remains—there is a solution to the global energy crisis, and it’s right here in America.

The post State Of American Energy 2023: The Solution is Here appeared first on .