Tom Wolf, a trust-funder personality, imagines he doesn’t need to collaborate, but the State Senate just told him he can’t do RGGI on his own.

Tom Wolf is a thoroughly unusual governor. He bragged about being different during his first campaign with those silly jeep ads. There aren’t many governors with beards these days, either, though they were once commonplace. A conversation with a friend last evening, in fact, made me realize who he looks like from the past; Russian Tsar Nicholas II who abdicated in the face of the 1917 revolution. The Wikipedia entry on Nicholas describes him as “a well-intentioned yet doctrinally inflexible ruler.” This might well also be said of Tom Wolf on any number of subjects, but especially RGG. It’s bad enough, in fact, that a bi-partisan, and nearly veto-proof, majority of the Pennsylvania State Senate is calling him out on it. 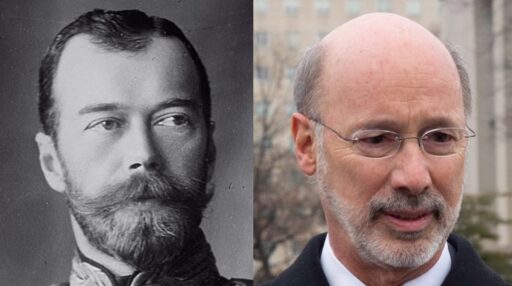 Tsar Nicholas II and Gov. Tom Wolf — Does Tom Wolf look like an older version of the Tsar or what??

The story on the State Senate rejection of Tom Wolf’s attempt to be Tsar in imposing RGGI on hapless Pennsylvanians who mistakenly elected this spoiled child as their governor, is told by our friend Kevin Mooney in the Daily Signal. A few choice excerpts are offered below, but you really need to read the entire article:

The state Senate on Wednesday passed legislation to prohibit Gov. Tom Wolf, a Democrat, from joining the Regional Greenhouse Gas Initiative and imposing carbon taxes without the approval of the Pennsylvania General Assembly.

A state Senate committee last week voted to move to the floor two bills that reaffirm the General Assembly’s authority over tax policy while asserting that Wolf’s Department of Environmental Protection cannot act unilaterally “to abate, control, or limit carbon dioxide emissions by imposing a revenue-generating tax or fee on carbon emissions.”

The Senate passed the House version of the legislation Wednesday by a vote of 33-17, one vote shy of a veto-proof majority…

I’m no fan of Andy Dinniman but his cooperation on the bill reflects his own problems with the “doctrinally inflexible ruler,” Tom Wolf. Dinniman is also retiring and can now say and do whatever he wants, so he’s sticking it to the governor the same way Wolf has been sticking it to trade unions, a traditional Democrat constituency, in favor of green elitist types.

There’s more to the story than Andy, though:

If the state Senate follows the House in passing legislation prohibiting the Wolf administration from implementing anti-emissions regulations without the General Assembly’s approval, it could set up a constitutional showdown.

Wolf should heed the advice of his own advisory committees that recommended against Pennsylvania’s joining the climate change accord, state Sen. Gene Yaw, a Republican representing the 23rd District (which includes Bradford, Lycoming, Sullivan, Susquehanna, and Union counties), said in an interview.

RGGI typically applies to electric power generators fired by fossil fuel with a capacity of 25 megawatts or greater. If Pennsylvania becomes part of the agreement, all five of the state’s remaining coal-fired plants in Keystone, Conemaugh, Homer City, Cheswick, and Montour would be affected, as well as all of the natural gas plants.

Since Pennsylvania would have to accommodate itself to RGGI’s rules and regulations, Yaw said, he is concerned that the state would lose its standing as an energy supplier and exporter.

“We are a generator of electricity,” he said. “These other states [in RGGI] have no generation. They are just importing it and they’re going to say to us that we have to match their emissions standards since we’re the generator. This means Pennsylvania is going to get hurt.”

Again, read the whole story, but the essence of it is a rejection, by Democrats as well as Republicans, of Tsar Wolf’s attempt to shove RGGI down the throats of the legislature and all Pennsylvanians. He won’t accept the fact that, like him, we’re different; we produce the energy that RGGI states consume and they want to tack on an import tariff to help fund their extraordinarily expensive green virtue signaling. Thank goodness Pennsylvania’s legislators are standing up against Tom Wolf’s tyranny! It’s time for Tsar Thomas to abdicate.