Susquehanna Students Get Up-Close and Personal with Heavy Equipment

Susquehanna students from all the county climbed onto and into big rigs, buses and emergency vehicles on Vehicular Career Day to learn what it’s all about.

More than 400 fifth graders from school districts across Susquehanna County climbed into big rigs, buses, and emergency vehicles on May 8 as part of the annual Vehicular Career Day coordinated by the Northern Tier Industry & Education Consortium (NTIEC). The event, which took place under mostly sunny skies at the Harford Fair Grounds, is geared to open the minds of school children who are just starting to gain an awareness that they will one day need to work for a living. 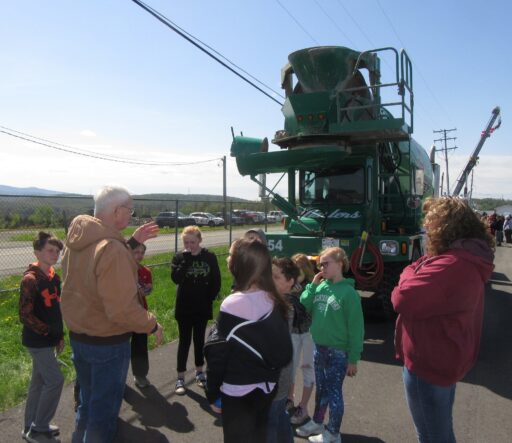 “These vehicles are representative of industries that will be here for many years,” NTIEC’s educational coordinator Debra Tierney explained. Through the exhibits and the presentations given by company representatives, she continued, “They are helping to build the work force of the future. They need to start now.”

General comments from the Susquehanna students centered around the sheer size of some of the vehicles. “I can’t believe how big everything is,” William Hobart of Susquehanna Community schools remarked. When asked if he’d consider a job in one of the work fields highlighted, he relied, “I’d think about it.”

Nearby, fifth-grader Allen Cliff related that he’d already been exposed to big rigs, as his grandparents have owned a trucking company for a number of years. He still thought the variety of vehicles, including the RHL Industries hauling truck and trailer combo, was “pretty cool.”

Elk Lake students Nathaniel Thurman, Hayden Lord, Brian Strohl, Aaron Fassett, John Heitsman, Gage Shupp and Kyle Sickler had been through about half of the stations already by 10:30 when they declared the giant cement mixer brought by Masters Concrete as their favorite big rig.

While even some adults might have gotten a bit lost following JHA Companies’ Chris Oleniacz’s explanation of GPS and triangulation, the students in front of him from Faith Mountain Christian Academy hung to his every word.

“We need something that measures very accurately and very precisely for what we do,” the land survey and project manager related. “Twenty feet isn’t close enough.” When asked what skills were necessary for his job, Oleniacz cited math, physical fitness and local history. The later, he noted, helps with determining boundary lines.

A high school diploma and a Class A CDL license are the primary requirements to get a job with RLE Equipment, recovery operator Danny Sabia related to Elk Lake students, who were all but dwarfed by a 67,000-pound tow truck that is capable pulling a 50-ton vehicle. 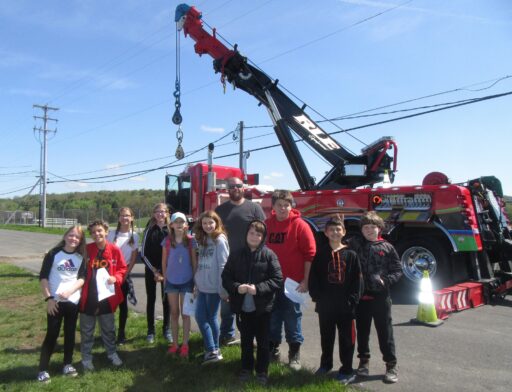 The Southwestern Energy (SWN) roustabout crew provided explanations of many of the tools packed into their truck and trailer, including safety harnesses, which they demonstrated. Keane Group site supervisor Nick Machusac showed Mountain View students the inner workings of a “doghouse” that is usually hoisted high above an active gas pad. Two people generally operate the 120,000 pound rig, he noted, putting in long shifts together.

Not all of the vehicles were behemoth, but the representatives from companies who worked out of smaller trucks and SUVs had similar advise to share with the children.

Williams community outreach coordinator Tammy Bonnice advised Susquehanna students to always get assignments done on time. “That will be very important when you get into the work force,” she remarked. Next to her, Chief Oil & Gas public relations manager Jonah Howe encouraged those who might be interested in his line of work to brush up on their English and public speaking skills, noting that he writes a lot of reports and newspaper articles and especially enjoys outdoor events that involve youths.

Once the fifth graders enjoyed lunch in the sun, they boarded buses back to their respective schools, hopefully with a new concept about how heavy equipment is used in industries that are literally operating in their backyards. According to Tierney, the teachers are given packets to follow up the vehicle fair that allow for debriefing in the classroom in the days following the event.

Cabot Oil & Gas, Chief and Southwestern Energy were the sponsors for the annual event, which included a complimentary lunch for vendors.