Tax Credits for Losers Just Continue Forever and Ever

[Editor’s Note: Robert Bradley succinctly calls out the foolishness of government tax credits for uneconomical wind energy projects and the like.]

It does not end. What is not competitive and government dependent just continues that way. This is not only because the market picks winners and leaves the losers for politics. It is also because the market-driven, non-subsidized technology improves over time. 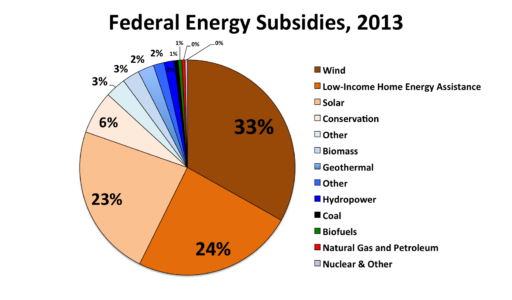 These energy provisions are included in a $1.4 trillion federal spending and tax extension package…. Despite billions of dollars in subsidies and state mandates requiring them, wind and solar power provided less than 10 percent of the nation’s electricity in 2019.

In comparison to the puny government tax favors to oil and gas in electrical generation,

Special government favors to business—crony capitalism—can turn losers into winners. And the loser lobby can claim progress and even inevitability as if they really won. This is the postmodernism of energy policy today in regard to the two politically correct renewables: wind and (on-grid) solar.

Editor’s Note: Wind tax credits have also totally distorted our energy market, adding costs in other sectors on top of the costs of the tax credits themselves.