[Editor’s Note: Opposition to a Tennessee Gas Pipeline compressor station in New Jersey from the corporatist/socialist troops of Food & Water Watch is but a tempest in a teapot.]

In April of this year, Tennessee Gas Pipeline’s (TGP) plan to flow more Marcellus gas to Westchester County, NY, and to New York City, called the East 300 Upgrade Project, took a giant leap forward when the Federal Energy Regulatory Commission (FERC) issued permits that allow TGP to upgrade two existing compressor stations (in PA), and build a brand new compressor station in West Milford (Passaic County, NJ), just across the border and not far from Westchester County (see FERC Issues Compressor Permits for TGP’s East 300 Upgrade in NY, NJ). TGP is beginning the work to build the new compressor in West Milford, which prompted a small group of Food & Water Watch protesters to assemble and mouth off on Saturday. 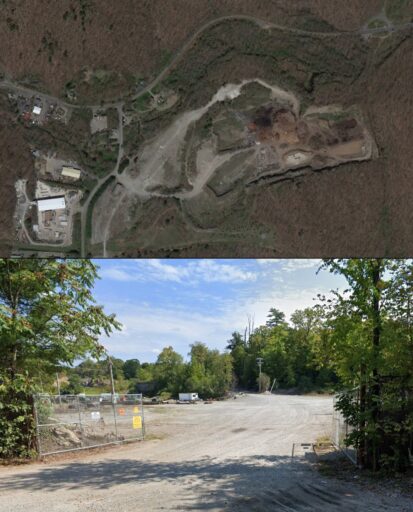 Aerial and drive-by Google Earth views of the quarried property where the Tennessee Gas Pipeline is being built. There could hardly be a better site, illustrating the lie that the opposition is about environmental impacts. It’s not. It’s about corporatism, socialism and the attempt to  halt all fossil fuel use as part of a great reset that would put gentry class oligarchs in charge of us all.

There is absolutely no reason to oppose the NJ compressor station other than an irrational hatred of fossil fuels, believing that fossil fuels are toasting the planet. Irrational is the word that best describes Food & Water Watch and the New Jersey Highlands Coalition, which together sued TGP in New Jersey Supreme Court to try and block the West Milford compressor (see Radicals Challenge No-Emissions Compressor in NJ Supreme Court). It certainly looks as if the compressor will be built before the NJ high court makes any kind of ruling.

Representatives of environmental advocacy group Food & Water Watch distributed emails this week seeking support for a planned protest near the pipeline company’s active construction site on Burnt Meadow Road. The company recently began site work in preparation for the installation of a 19,000-horsepower electric-driven compressor turbine that will connect to the company’s existing natural gas pipeline.

Supported by some union groups and industry advocates, the $246 million East 300 Upgrade Project has been contested for years by area environmental groups, such as Food & Water Watch, the New Jersey Highlands Coalition and the Sierra Club.

Protestors from those groups and others are expected to gather at 11 a.m. Saturday near the construction site in an attempt to convince state officials, namely Gov. Phil Murphy, to block the project based on safety, health and environmental concerns. Protestors in April 2021 made a similar protest at the same proposed site, the intersection of Greenwood Lake Turnpike and East Shore Road.

Opponents said there is still time to thwart the project. A key state emissions permit for the expansion of the compressor station in Wantage remains outstanding. There are also pending legal challenges to previously granted state and federal approvals.

Site work in West Milford nonetheless started in October. Gary Paolazzi, a neighboring homeowner, said the work has been disruptive for the few residents who live near the site, a former quarry more recently used to store landscaping material.

From bright lights before 6 a.m. to dust caused by terraforming the landscape, Paolazzi said the company has been less than neighborly. Katherine Hill, a company spokesperson, said some of the light problems stemmed from local law enforcement performing early morning security checks. Hill said no work is being performed between 7 p.m. and 7 a.m.

The project has been opposed by politicians in neighboring towns. Local government officials in Bloomfield, Hamburg, Montague, Ringwood, Wantage and Vernon have adopted resolutions opposing the project. West Milford officials proposed a similar resolution but never voted on it. Town officials later inked an agreement with the pipeline company that included a $200,000 cash payment to the township.

Editor’s Note: Protesting of this compressor station is merely an exercise of virtue signaling by the serial protesters who serve as the shock troop shills for corporatist/socialist special interests seeking money and power via a great reset that puts gentry class oligarchs in charge of everything. It’s the story of our times. Food & Water Watch is a bunch of crazy ideologues mostly unknowingly, but sometimes knowingly, in service to these modern day highway robbers. That is the story to be learned from these episodes.