The Battle for Western Civilization Is Real and Will Be Won!

Western Civilization is under attack on every front but attempts by its enemies to deny its truths have the potential to re-revolutionize America and save us!

It is so easy to be drawn into despair over the fate of Western Civilization. Two examples suffice to explain the crisis faced by civil society today. One is the scam created around unsettled global warming by corporatists eager to plunder our government for subsidies and socialists equal eager for utopias where they serve as Plato’s guardians. The other is the COVID debacle, a sordid story of power-seeking at the expense of every freedom we thought we had with another dose of corporatism on the part of Big Pharma. Both have served to to illuminate the corruption of Western Civilization, why it is in such danger today and how our very ability to speak the truth as we see it is all but evaporated. But, all is not yet lost, and we may very well be on the cusp of a re-revolution that will restore American greatness.

This much we know; we are on the cusp of something big. This is obvious from the extent to which the enemies of Western Civilization are struggling to deny truths. Take, for instance, this image: 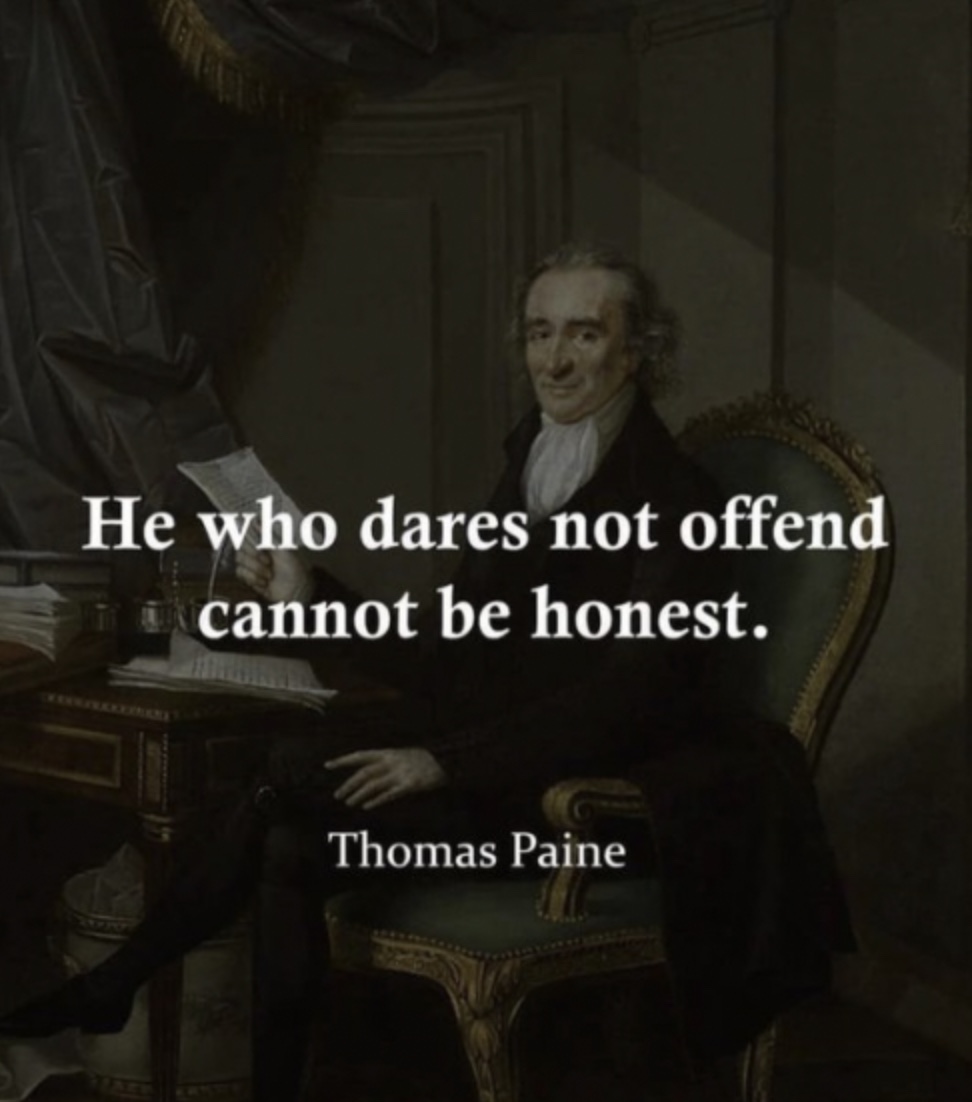 Thomas Paine, of course, was one of those who inspired the American revolution, the author of the famous “Common Sense” pamphlet. The quote is one indicating precisely why free speech is one of our fundamental Constitutional rights. Without free thought and the right to express it, there is no freedom and we are merely serfs at the mercy of tyrants. It would be hard to identify a more precise description of our inalienable right to free speech, in fact, than the Paine quote. Yet, this how Instagram (and Facebook, which owns it) responded to the posting on their platform: 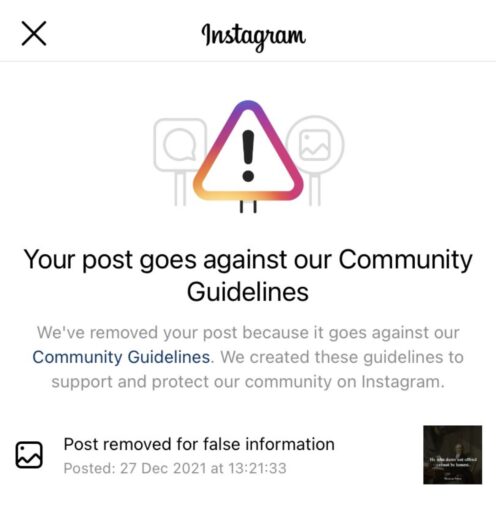 Yes, Facebook and Instagram called a real quote by one of our revolutionary heroes “false information” even though it was both accurate and undeniably true from a philosophical  perspective. Outrageous? You bet and we’re seeing this attempt to deny basic truths everywhere in the press and on social media. Winston Churchill, though, said this:

“Truth is incontrovertible. Panic may resent it. Ignorance may deride it. Malice may distort it. But there it is.”

He might have added “Fear may suppress it,” to the list because that’s what Facebook and Instagram are attempting to do here, but they are already failing because there are thousands of us exposing their actions. Truth always outs in the end, though it make take a lifetime or two.

There are, thank goodness, signs we won’t have to wait that long. This is because the attempts to suppress truth have become far too obvious, overbearing and prevalent. Twitter, for example, just permanently banned Dr,. Robert Malone, one of the key contributors to the development of the mRNA technology used in the primary COVID vaccines. This is because he is critical of their overuse and likely role in the rapid evolution of variants. Some faceless digital controller in Twitter was offended by Dr. Malone’s disagreement with the hopelessly inept, attention-addicted and forever bureaucrat Anthony Fauci and decided the public shouldn’t hear from the fellow who helped develop the technology itself.

These two stories may represent the moment when the vaccine and control obsessed Wu-Flu warriors “jumped the shark.” This is why I have hope we can yet save Western Civilization, which has deteriorated so badly and seems to no longer believe in anything or have the will to defend itself. Big Government, Big Media and Big Pharma have simply gone too far and the general public knows it, if polls mean anything. Joe Biden’s sudden admission “there is no Federal solution” is a tacit admission of this. Truth is getting out and Joe Rogan already has Dr. Malone lined up for an interview (reportedly airing today).

We are seeing the same thing with global warming. The usual suspects are desperate for examples of its terrible effects to counter the skepticism of the public. The citizenry sees China and Russia ignoring the movement and seeking to zero us all out while our ruling class pursues net-zero nonsense so as to enable special interests to grab trillions from ratepayers and taxpayers. Climate scientist Judith Curry demonstrates in an easily digested post simply titled “TORNADO.”  She works in quotes from others as well. Here are the key points:

On December 10 and 11, a catastrophic tornado outbreak slammed the Mississippi Valley, with catastrophic impacts particularly in Kentucky. One tornadic storm traveled more than 200 miles, and more than 100 people may have died…

What does the IPCC AR6 have to say about tornadoes and global warming?

President Joe Biden made these statements in an interview:

Q    Mr. President, does this say anything to you about climate change?  Is this — or do you conclude that these storms and the intensity has to do with climate change?

THE PRESIDENT:  Well, all that I know is that the intensity of the weather across the board has some impact as a consequence of the warming of the planet and the climate change.

The specific impact on these specific storms, I can’t say at this point.  I’m going to be asking the EPA and others to take a look at that.  But the fact is that we all know everything is more intense when the climate is warming — everything.  And, obviously, it has some impact here, but I can’t give you a — a quantitative read on that.

Here is what Michael Mann has to say [link]:

Meteorologist Michael Mann of Penn State told USA Today: “The latest science indicates that we can expect more of these huge (tornado) outbreaks because of human-caused climate change.”

In another interview [link]:

We speak to climate scientist Michael Mann about the role of climate change in the storms and climate denialism among Republican leaders. “Make no mistake, we have been seeing an increase in these massive tornado outbreaks that can be attributed to the warming of the planet,” says Mann, director of the Earth System Science Center at Penn State University.

And then to top it off, there is this tweet – data ‘denial’ at its ‘finest’:

The ‘deceptive’ graph comes from a plot that is on the NOAA website [link] through 2014, which was updated by AEI thought 2018. NOAA’s explainer of the data can be found [here]…

The period from 1950 – 1975 shows a steadily rising level of activity reaching a climax in 1975. After that there was a sudden and marked decline with no sign of a reversing increase since. All three categories are strikingly similar, which indicates there is no tendency towards a greater proportion of more power or less powerful storms over this period.

The post 1975 period marks the beginning of the late 20th century warming which IPCC has attributed mainly to anthropogenic effects ( AGW ). If there is a need to hypothesise a link between “global warming” and the frequency or intensity of tornadoes in USA, it would be that there have been less events in all major categories during this warming period. There has been no significant change in the distribution in storm severity as temperatures rise and recent warmer decades have seen notably less activity than the earlier post-WWII cooling period.

Curry’s term “data denialism” is an accurate description of what’s happening in both my examples; truth is being denied airing by those who have aligned themselves with government and the special interests. The “Bigs” are all now aligned, in fact, and have decided they need to be free of the citizenry, the electorate or anything else remotely connected with the general public and that is the essence of the battle for Western Civilization in which we are now engaged. They have made it a battle of us against them and that’s why I’m hopeful they’ll lose in the end.

This is not only because Churchill’s words resonate with me, but also that there are more of us than them, a crucial fact most wanna-be emperors and kings forget. Andrew Cuomo forgot and assumed he could do anything and get away with it. He couldn’t because the truth worked its way out into the public and, before he saw it coming, his own party, under the pressure of public opinion, saw he had to go. The great liberal writer Green Greenwald also took notice of something earlier this week about establishment attempts to squelch speech with hit pieces on those of differing opinions: 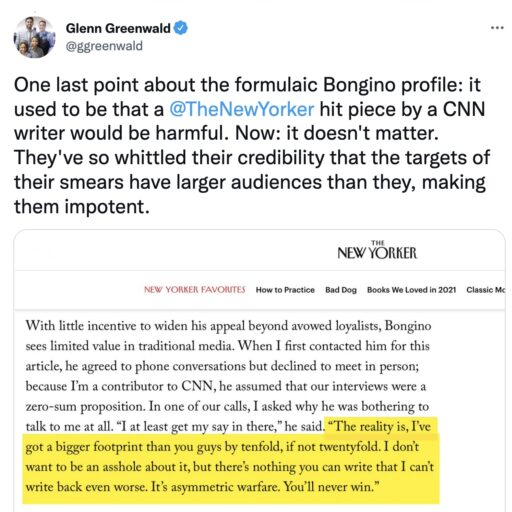 The numbers are with us. Yes, we have to find ways around Facebook, Twitter, CNN, the New Yorker, et al by going  a different route and using what is, effectively, samizdat, but look at the numbers! They give me hope we’re going to win this one. We have to do so, quite honestly, even if Facebook takes down my Thomas Paine quote.