China is happy to be seen as a green energy leader to take eyes off the fact China energy reality is one of developing and grabbing all the fossil fuels it can.

China energy development is not what it appears. Do a DuckDockGo search (I never use Google and you shouldn’t either) on “China energy green leader” and you’ll get headlines such as these:

The East Is Green: China’s Global Leadership in Renewable Energy

This reporting is a totally inaccurate portrayal of the China energy reality; a head fake designed to simultaneously suggest China is giving up on fossil fuels while it is, in fact, embracing them as never before. It is also pure political correctness; s story formulated to create envy and get us to go in the opposite direction. 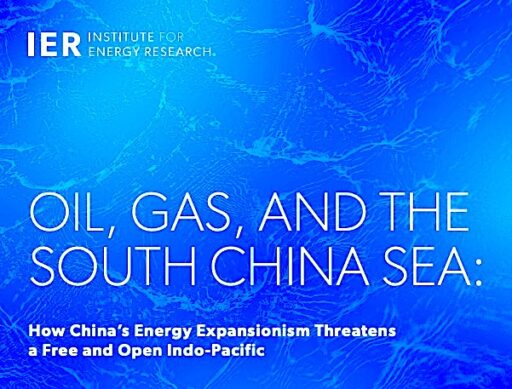 Our friends at the Institute of Energy research (IER) have come out with an outstanding research paper that puts the lie to what we’re reading in major media. Provide below are some of the key facts:

And, here is how it all ties together with respect to China energy needs, ambitions and foreign policy:

The People’s Republic of China (PRC) resource pursuits in the South China Sea reflect the importance Beijing places on a stable oil and gas supply to the country’s economy and national security and they link its erstwhile priority of building prosperity with its rising priority of building strength. China’s demand, import, and production trends indicate that the importance of oil and gas will not recede any time soon.

Further, the PRC’s actions demonstrate its willingness to ignore international standards, even when it has signed on to them. Its stated policies, economic indicators, and recent actions cast doubt on its commitments to emissions reductions, including both its Paris Agreement intended nationally determined contribution and Xi Jinping’s 2060 carbon neutrality pledge.

China’s assertive development of resources to which it does and does not have legal claims contrasts with President Joe Biden’s turn away from oil and gas. While the president has maintained much of the foreign policy of his predecessor, he has forsaken the Trump-era utilization of American oil and gas resources to support geopolitical objectives.

It ought to be understood that China—the world’s largest greenhouse gas emitter and a state that President Biden has called “our most serious competitor”—has no such intention. China is crossing the boundaries of international law to claim as much oil and gas as it can. While U.S. politics might give the impression the world is singularly focused on winning the wind, solar, and battery race, China is shoring up its critical interest in oil and gas.

When in 1999 Sergei Troush wrote with prescience of China’s impending oil import vulnerability, he failed remarkably in another forecast. “There are many reasons to believe,” he averred, “that China’s growing involvement in the world energy market, and its participation in energy transportation networks—no matter what form the final geopolitical solutions and transportation trajectories may take—will likely stabilize and moderate Chinese foreign policy.”

As its conduct in the South China Sea illuminates, Xi’s China is not the responsible stakeholder in global and regional affairs that Troush and others expected it to be. Rather, China today is a state reminiscent of the great powers of yore, potent, yet vulnerable, and willing to use its might to secure the fossil energy resources that anchor its economy.

Read the whole thing for superb insights into what China is really all about. It’s not the Green New Deal, which is nothing but a head fake. Let’s not be fooled.