The Dangerous Intersection of Energy, Politics and Shipping

Richard W. Fulmer
Author at the Foundation for Economic Education
Coauthor of “Energy: The Master Resource“

[Editor’s Note: Richard Fulmer lays out the dangerous nature of what happens when ideologues committed to destruction, mix a brew of energy, extremism and politics.]

There are “no regrets” policy changes that can reduce CO2 emissions by expanding, not reducing, freedom. Repealing the Merchant Marine Act of 1920 (a/k/a, the Jones Act), for example, would eliminate the Act’s enormous carbon footprint. The Act, which requires goods shipped between American ports to be transported on American owned, built, and crewed ships, makes it impossible for Americans to make full use of the veritable conveyor belt of ships that navigate our nations’ waters.

A foreign ship, dropping imported goods off in cities along our east coast, cannot pick up products in New York and transport them to Miami. Instead, it must make the journey with partially empty holds. The Jones Act has helped raised the price of American-built vessels to the point that a ship built domestically can cost four times what it would cost to build in South Korea or Japan.

As a result, the United States now has fewer than 100 Jones-compliant ships.  Goods are most efficiently transported by water. But, thanks to this law, much of our freight must be sent by rail and truck, resulting in wasted fuel and unnecessary CO2 emissions. 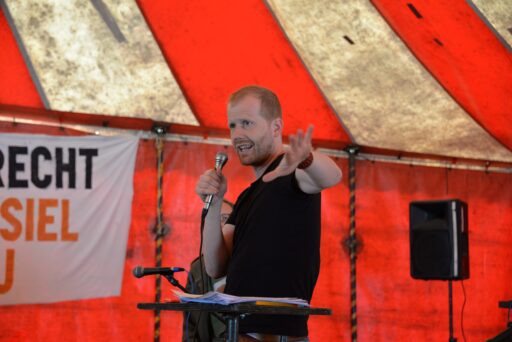 Repealing the Jones Act, however, is a heavy lift. It would mean gathering facts and arguments to confront powerful lobby groups, labor unions, and politicians. But fear not. Andreas Malm, a human ecology lecturer at Sweden’s Lund University, offers an easy workaround: blow stuff up. In his new book, How to Blow Up a Pipeline: Learning to Fight in a World on Fire, Malm advocates the “intelligent sabotage” of fossil fuel infrastructure:

Damage and destroy new CO2 emitting devices. Put them out of commission, pick them apart, demolish them, burn them, blow them up. Let the capitalists who keep investing in the fire know that their properties will be trashed.

In a sympathetic interview with Vox, Malm acknowledges that the property destruction he advocates is violence: “But … It’s a lesser form of violence, qualitatively different from harming human beings.”

In an equally sympathetic interview with The New Yorker, Malm explains,

I am in favor of destroying machines, property – not harming people. That’s a very important distinction.

But it is a distinction without a difference unless he can explain how to disable or destroy property and infrastructure on which countless lives depend without taking any lives.

How will Malm keep people from freezing to death in the winter or dying from heat exhaustion in summer after his followers have disabled power plants or the pipelines that supply them? How will ambulances take injured patients to hospitals without gasoline in their tanks or, if they are electric, without charged batteries? Malm’s arguments lay the groundwork for mass murder – indirect mass murder, perhaps, but mass murder, nonetheless.

While Malm is not blind to collateral damage, he wears blinkers. In his book, he criticizes the environmentalist group, Extinction Rebellion (aka XR), for disrupting service at London Underground stations and inconveniencing working-class commuters. Yet he apparently doesn’t see that raising the price of energy through sabotage will hurt the poor more than anyone else. And, unlike the poor, wealthy people – the people who Malm is ostensibly trying to hurt – can afford to deal with power outages by installing (CO2-emitting) generators at their homes and businesses.

In his book and via interviews, Malm argues that a radical, violent fringe provides leverage to moderates within movements. Using the BLM riots as an example, Malm observes that moderates can, in effect, blackmail politicians by saying, “You can deal with us or deal with the militants.”

A new book by Joshua Cherniss entitled, Liberalism in Dark Times: The Liberal Ethos in the Twentieth Century, effectively responds to people who, like Malm, resort to violence to achieve their political ends.  It opens with two questions:

How do humanitarian idealists become butchers of human beings?  How do they convince themselves that they are virtuous in their butchery?

Ruthlessness – understood as both a feature of action and a quality of thought and feeling that rejects all scruples, doubts, hesitation, and remorse in pursuing some ultimate purpose or serving some paramount principle – possesses an attractive simplicity and strength….

Many political evils, of course, stem from garden variety villainy – ambition, venality, the appetite for domination or longing for submission.  But righteous ruthlessness is particularly troubling, insofar as it can transform apparent virtues into terrible vices.

As a disillusioned Communist in Vasily Grossman’s “Life and Fate” reflects, the terrible paradox of Communism was that it ‘freed people from morality the name of morality’; for the sake of a ‘fine and noble’ cause, it justified killing, crippling, uprooting and terrorizing, and licensed ‘pharisees, hypocrites, and writers of denunciations.’

This showed how ‘the very concept of good’ can become ‘a scourge, a greater evil than evil itself.’  The combination of idealism and cynicism in the pursuit of noble goals through brutal means is particularly potent in its appeal, and horrific in its consequences.

Andreas Malm claims that property destruction is necessary for the defense of the planet and of humanity. On what moral basis, though, could he object if people were to destroy his home or his university to protect themselves?

What would be his response if people, refusing to return to clear cutting forests for a bit of warmth or to slaughtering whales for a bit of light, destroyed his means of spreading his gospel of destruction? How could he object? And where would the violence end?

Marshaling facts and arguments and confronting powerful lobby groups, labor unions, and politicians is a heavy lift. Developing new, cleaner technology is, perhaps, an even heavier lift. But they are both much lighter loads than is embarking on a war of all against all.