[Editor’s Note: Poetic justice! It has long been known wind turbines present aesthetic and environmental issues but it is the health issues that are now coming to the forefront.]

Once ridiculed, the negative health effects of industrial wind turbines on nearby residents has entered the mainstream. The World Health Organization stated in 2018 “strong evidence that noise is one of the top environmental hazards to both physical and mental health and well-being in the European Region.” Wind turbines, do not start your engines. 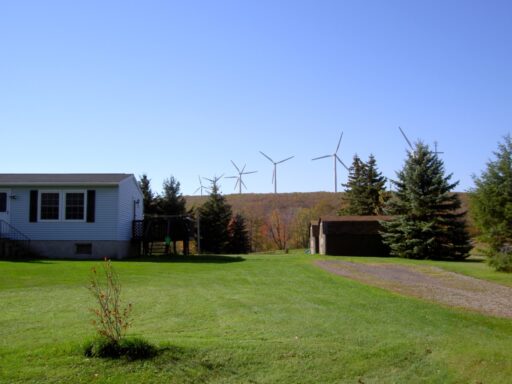 In the U.S., Robert Bryce noted:

Since 2015, nearly 300 government entities from Vermont to Hawaii have moved to reject or restrict wind projects. Local governments are implementing a panoply of regulations to restrict the growth of wind projects including strict limits on noise, minimum setback distances, and even seeking licenses for heliports. A thorough review of the studies [has] documented the deleterious health impacts of noise from wind turbines.

Wind turbines generate low-frequency noise (LFN, 20–200 Hz), which poses health risks to nearby residents. This study aimed to assess heart rate variability (HRV) responses to LFN exposure and to evaluate the LFN exposure (dB, LAeq) inside households located near wind turbines. Thirty subjects living within a 500 m radius of wind turbines were recruited. The field campaigns for LFN (LAeq) and HRV monitoring were carried out in July and December 2018.

Moreover, households built with concrete and equipped with airtight windows showed the highest LFN difference of 13.7 dB between indoors and outdoors. In view of the adverse health impacts of LFN exposure, there should be regulations on the requisite distances of wind turbines from residential communities for health protection.

Wind energy is used around the world as a source of clean energy. However, wind turbines generate low-frequency noise (LFN) in the range of 20–200 Hz. As many community complaints have centered around the LFN from wind turbines, it is important to evaluate the health impacts of LFN on residents near wind farms.

LFN exposure has been found to cause a variety of health conditions. Exposure to LFN from wind turbines results in headaches, difficulty concentrating, irritability, fatigue, dizziness, tinnitus, aural pain sleep disturbances, and annoyance. Clinically, exposure to LFN from wind turbines may cause increased risk of epilepsy, cardiovascular effects, and coronary artery disease.

An autonomic imbalance may increase the morbidity and mortality of cardiovascular diseases. A review paper indicated that road traffic noise may over-activate the hypothalamic-pituitary-adrenocortical axis (HPA) and sympathetic-adrenal-medullar axis (SAM), increase the blood pressure and reduce HRV, and finally affect the cardiovascular system.

A recent study analyzing 658 measurements of HRV obtained from 10 healthy males (18–40 years old) indicated reductions in HRV due to environmental LFN exposure. However, few studies have specifically examined the effect of LFN from wind turbines on HRV in healthy individuals; thus, this was the aim of this study.

In view of the adverse health impacts of noise exposure, many countries and international organizations have established regulations for noise control. These regulations are set for noise in the full spectrum of human hearing (20–20 k Hz). The Ministry of Environment of Finland set limits for wind farm noise of 45 dB (LAeq) during the day and 40 dB (LAeq) during the night. In the United Kingdom, the fixed limit for turbine noise is 40 dB (LAeq) for the daytime and 43 dB (LAeq) for the nighttime.

In addition to the full noise spectrum, the Taiwan Environmental Protection Administration (EPA) also established regulations for LFN to avoid impacts on residents, since wind farms have been set up very close to residential communities. The LFN standards for wind turbines in the daytime (7 a.m.–7 p.m.) and evening (7 p.m.–10 p.m.) are 39 dB (LAeq) for environments requiring tranquility such as residential areas, 44 dB (LAeq) for mixed residential and commercial/industrial areas, and 47 dB (LAeq) for industrial areas; those at nighttime (10 p.m.–7 a.m.) are 36, 36, 41, and 44 dB (LAeq), respectively.

This study assessed the LFN in the indoor environments of households near wind turbines to evaluate whether the LFN levels meet the Taiwan EPA standards.

The overall sound pressure level and spectrum of external noise change when transmitted to the interior of a building. Mid- and high-frequency noises are selectively attenuated by roofs and walls, causing the building structure to function like an LFN pass filter. Outdoor to indoor noise reduction generally decreases with frequency, which is related to housing construction and room dimensions.

Factors contributing to indoor/outdoor noise reduction also include structural resonances, room modes, and coupling between the air volume inside the residence and the stiffness of the walls, roofs, and ceilings. It is known that the appropriate choice of construction materials and designs can contribute to LFN exposure reduction for residents. Hence, these factors are not evaluated comprehensively in this study.

Taiwan is a small and highly populated island. Wind farms have been set up near residential communities, affecting the day-to-day lives of the residents. The hypothesis of this study is that LFN from wind turbines might affect HRV of residents. In order to verify the hypothesis of this study, we defined two objectives: to evaluate the LFN and HRV relationship with an intervention design and to assesses the actual LFN exposure of the community residents.

This investigation is the first in Asia examining the impact of LFN from wind turbines on the HRV of healthy residents. In addition, the variations in LFN exposure inside several residences constructed of different building materials are examined. The findings of this study would serve as a useful reference for Asian countries planning to launch or promote wind power generation.

LFN from wind turbines is potentially annoying to residents living nearby and affects human health. This study assessed the response of HRV indicators (SDNN and LF/HF) to LFN exposure and evaluated the LFN exposure inside households located near wind turbines. The results showed the association of changes in HRV with LFN exposure and an SDNN reduction of 0.43% with an increase of 1 dB (LAeq) in LFN. The households’ average LFN levels were 34.8 ± 6.9 and 43.4 ± 5.7 dB for indoors and outdoors, respectively.

In addition, the average indoor LFN levels at nighttime in four of the seven households monitored were above 30 dB (LAeq), the threshold for good sleep quality. Taiwan has a high population density, and wind farms have been set up near residential communities.

In view of the adverse health impacts of exposure to turbine-generated LFN, it is recommended that the government set regulations on the requisite distances of wind turbines from residences, for houses near wind turbines to be equipped with airtight windows for sound insulation, and for residents living in close proximity to wind turbines to have their windows closed most of the time to reduce LFN transmission.