The Wind Turbines Whisper: The Answer Is Not Blowin’ in the Wind

Wind turbines are whispering to us, if only we turn our ear to listen carefully to hear. They’re telling us none of the answers are blowin’ in the wind.

Wind turbines continue to be the most controversial of so-called “renewable” energy sources worldwide. But, you say, wind is surely renewable. It blows intermittently, but it’s natural, free, renewable and climate-friendly.

That’s certainly what we hear, almost constantly. However, while the wind itself may be “renewable,” the turbines, the raw materials that go into making them, and the lands they impact certainly are not. And a new report says harnessing wind to generate electricity actually contributes to global warming! 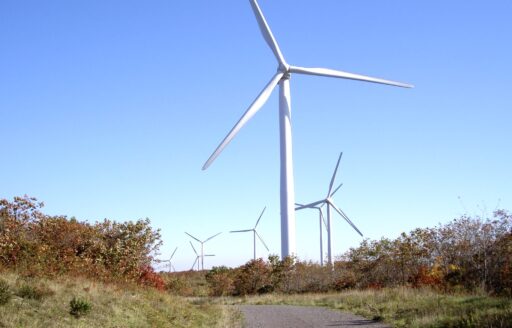 Arcadia Power reports that the widely used GE 1.5-megawatt (MW) turbine is a 164-ton mini-monster with 116-foot blades on a 212-foot tower that weighs another 71 tons. The Vestas V90 2.0-MW has 148-foot blades on a 262-foot tower, and a total weight of about 267 tons. The concrete and steel rebar foundations that they sit on weigh up to 800 tons, or more. And the newer 3.0-MW and even more powerful turbines and foundations weigh a lot more than that.

Citing National Renewable Energy Laboratory data, the U.S. Geological Survey notes that wind turbines are predominantly made of steel (which comprises 71-79% of total turbine mass), fiberglass and resin composites in the blades (11-16%), iron or cast iron (5-17%), copper (1%), aluminum (0-2%), rare earth elements (1-3%) and other materials. Plus the concrete and rebar that anchor the turbines in the earth.

It takes enormous amounts of energy (virtually all of it fossil fuels) to remove the overlying rock to get to the ores and limestone, refine and process the materials into usable metals and concrete, fabricate them into all the turbine components, and ship everything to their ultimate locations. Petroleum for the resins and composites – and all that energy – must also be extracted from the earth, by drilling and fracking, followed by refining and manufacturing, again with fossil fuel energy.

Wind turbine transportation logistics can be a deciding factor in scheduling, costing and locating a project, Wind Power Monthly admits. The challenge of moving equipment from factories to ports to ultimate industrial wind power generation sites has become more formidable almost by the year, as the industry has shifted to larger and larger turbines. Offshore turbine sizes (up to 10 megawatts and 650 feet in height) present even more daunting logistical, maintenance and removal challenges.

Back in 2010, transportation costs totaled an average 10% of the upfront capital cost of a wind project. Transporting the nacelles (housings for the energy-generating components, including the shaft, generator and gearing, to which the rotor and blades are attached) typically required a 19-axle truck and trailer that cannot operate using renewable energy and which a decade ago cost about $1.5 million apiece. Those costs have continued to escalate.

Highways and city streets must often be closed down during transport to wind farm sites hundreds, even thousands, of miles away – to allow nacelles, 100-foot tower sections and 150-foot blades to pass through.

Transmission lines and transformers add still more to the costs, and the need for non-renewable materials – including more steel, copper, aluminum and concrete. To get wind-generated energy from largely remote locations to cities that need electricity and are eager to cash in on the 2.3 cent per kilowatt-hour production tax credit, the U.S. is spending $47.9 billion to construct transmission lines through 2025.

Of that, $22.1 billion will be spent on transmission projects aimed at integrating renewable energy into the existing power grid, without making it so unstable that we get repeated blackouts.

On top of all that, wind turbines only last maybe 20 years – about half the life spans of coal, gas and nuclear power plants. Offshore turbines last maybe 12-15 years, due to constant corrosion from constant salt spray. Then they have to be decommissioned and removed. According to Isaac Orr, policy fellow at the Center of the American Experiment, the cost of decommissioning a single turbine can reach half a million dollars. Then the old ones have to be replaced – with more raw materials, mining and smelting.

Recycling these materials also consumes considerable energy, when they can be recycled. Turbine blades are extremely hard, if not impossible to recycle, because they are complex composites that are extremely strong and hard to break apart. A lot of times, the blades just get cut up in large segments and dumped in landfills – if they can find landfills that want them. The massive concrete bases often just get left behind.

But shouldn’t those kinds of data be presented front and center during any discussion of what is – or is not – clean, green, free, renewable, sustainable, eco-friendly energy?

We constantly see and hear reports that the cost of wind energy per kilowatt-hour delivered to homes and businesses are becoming competitive with coal, gas, nuclear and hydroelectric alternatives. But if that is the case, why do we still need all the mandates, feed-in tariffs and other subsidies? And do those reports factor in the huge costs and environmental impacts presented here?

Amid all these terribly inconvenient facts about wind energy, it shouldn’t be too surprising that a new study destroys the industry’s fundamental claim: that wind energy helps prevent global warming. Harvard professor of applied physics and public policy David Keith and his postdoctoral researcher, Lee Miller, recently found that heavy reliance on wind energy actually increases climate warming! If this is so, it raises serious questions about just how much the U.S. or other nations should rely on wind power.

As the authors explain, the warming is produced because wind turbines generate electricity by extracting energy out of the air, slowing down wind and otherwise altering “the exchange of heat, moisture, and momentum between the surface and the atmosphere.” The impact of wind on warming in the studied scenario was 10 times greater than the climate effect from solar farms, which can also have a warming impact, the two scientists said.

The study, published in the journal Joule, found that if wind power supplied all U.S. electricity demands, it would warm the surface of the continental United States by 0.24 degree C (0.43 Fahrenheit). That is far more than any reduction in warming achieved by totally decarbonizing the nation’s electricity sector (around 0.1 C or 0.2 F)) during the 21st century – assuming climate models are correct about the amount of warming that carbon dioxide emissions are allegedly causing.

Of course, his analysis assumes significant warming that has yet to occur, despite increasing use of fossil fuels by China, India, Indonesia and other countries. It also assumes the world will still be using increasing amounts of coal and natural gas 100 to 1,000 years from now – a highly dubious proposition. And it ignores every point made in this article, which clearly explains why wind energy is not really cleaner than coal or gas.

Maybe, my friends, the answer is not blowing in the wind.

Editor’s Note: A County Board of Health in Western New York recently and officially advocated that industrial wind turbines be placed no closer to homes than 1.5 miles, and be limited to a maximum of 35 dBA noise. Here is very short video about what happened. Moreover, these types of major wind energy health regulations are endorsed by:

a) the Chautauqua County Board of Health, and

b) the Western New York Health Alliance, and

Interesting, huh? Wind energy isn’t that easy to sell. That’s why New York is trying to force it on communities.