Toby Rice Gets It Right and Sandy Cortez Ought to Pay Attention!

Toby Rice Gets It Right and Sandy Cortez Ought to Pay Attention!

[Editor’s Note: Toby Rice has it precisely correct in his new “Unleashing U.S. LNG” report but fractivists keep averting their eyes from what’s happening in other countries.]

Toby Rice issued a report the “Keep It in The Ground” crowd won’t like, but its members should pay close attention to what he’s saying.

Rice. CEO of America’s biggest natural-gas producer, EQT, released “Unleashing U.S. LNG” during his appearance at this year’s CERAWEEK conference in Houston, and the report’s subtitle, “The Largest Green Initiative on the Planet,” was guaranteed to irritate environmental activists like Alexandria Ocasio-Cortez. She is still chortling over leading protests against a now-canceled gas-fired electric-power plant in the New York.

That’s Independent Service Operator territory, but the Empire State congresswoman could learn much by perusing the PowerPoint presentation EQT’s website gives away for free. In that well-researched document, Rep. Ocasio-Cortez would find EQT’s CEO telling her that she and her fellow activists actually are punching at the wrong target:

It’s not natural gas they must fight to keep in the ground, but coal, if they truly do want dramatic reductions in human-introduced CO2 in the atmosphere.

It’s a point that should be obvious to anyone studying the U.S. success in becoming the only signatory to the Paris Climate Accords’ Kyoto Protocol to do what was promised. But activists such as Rep. Ocasio-Cortez, push for a “Green New Deal” in America without considering what the rest of the world’s energy users are doing. They and she apparently can’t see it. 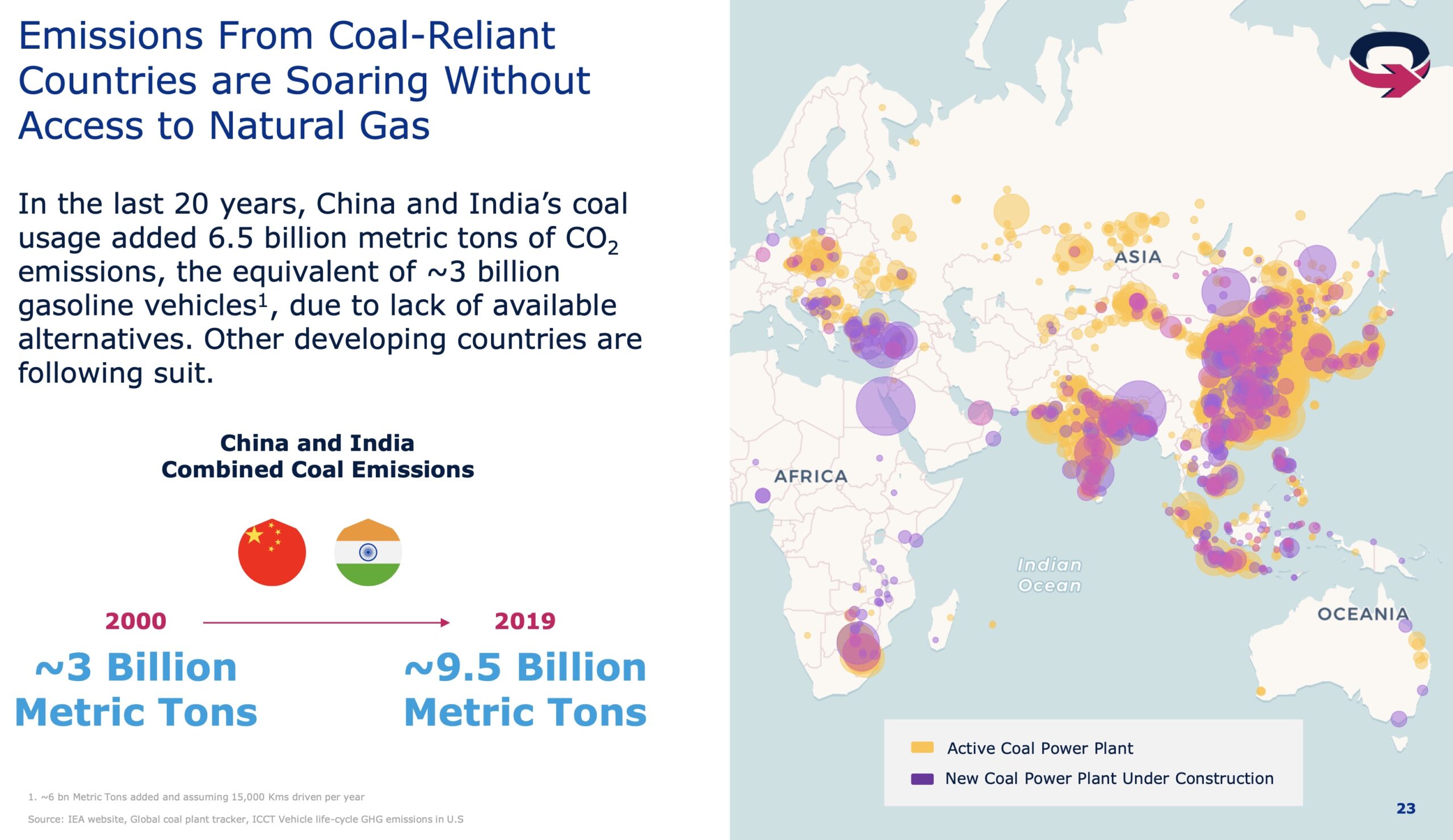 Like many interested observers attending energy conferences across the American landscape, this writer routinely hears protesters marching outside convention centers mouthing arguments that it’s really not true that the switch from coal to gas-fired power production is the key change that produced the lion’s share — 61 percent — of all U.S. atmospheric emissions reductions between 2005 and 2020.

Fugitive methane emissions from the gas fields themselves cancel any progress the fueling switch produces, the protest-sign carriers say, citing aerial-survey studies by the Ingraffea-Howarth team that purport to prove their case. “Methane is a much more potent Greenhouse Gas,” the protest leaders say, and they clearly believe that’s all there is to be said.

Never mind that the U.S. Environmental Protection Agency’s own monitoring studies of actual fugitive emissions from stations right next to the drilling and production equipment have shown dramatic reductions in the measurements of methane where it’s being brought out of the ground.

Never mind that the International Energy Agency, a United Nations organization not especially friendly to continued use of fossil fuels, continues to cite the progress the United States has made in reducing Greenhouse gases as an exemplar for the world.

Never mind that Dr. Ingraffea and his colleague are not atmospheric scientists, or that they have been found in federal court — in the widely covered lawsuit against Cabot Oil and Gas (now Coterra Energy) in Dimock, Pennsylvania, to have no expertise in geoscience, either.

The protest groups, undeterred by such facts, keep marching on.

Toby Rice, CEO of the company doing more than any of those protest groups’ leaders to keep the lights on all over America and, not coincidentally, keep American households warm during the cold months of the winter just past, marches to a different drum, and protest leaders like Rep. Oasio-Cortez could do much good if they paid attention to his marching points.

Start with the recognition that CO2 emissions from burning coal are rapidly increasing.

What’s happening, apparently unappreciated by Rep. Ocasio-Cotez and her protest-leader friends, is that while Americans are listening to Gretta Thunberg’s lectures about what we should do, power-hungry countries in the rest of the world are busy constructing 176 Gigawatts worth of coal-fired electric plants, many of them in Asia, Africa, and the Middle East. Hundreds of those plants are being installed by Chinese companies, as other researchers have found, with the ones sold to developing countries totally unequipped with pollution controls.

U.S. energy policy has been to refuse to provide financing for gas-fired power plants in developing countries, favoring “renewable energy” systems like solar and wind-power projects instead, But, as Toby Rice’s “Unleashing U.S. LNG” Report has shown, that’s a faint hope. Countries in the developing world cannot afford the expenditures required to construct the kind of subsidized wind- and solar-powered electric facilities favored in countries such as Germany, whose “Energiewend” experiment factors so heavily in environmental activists’ arguments about “ending” the use of fossil fuels here.

Those activists, including Rep. Ocasio-Cortez, probably are getting an important lesson watching Western European leaders struggle to justify continued importation of natural gas delivered by pipelines from Vladimir Putin’s Russia while attempting to keep up with U.S. sanctions imposed because of Russia’s unjustified invasion of the independent nation of Ukraine, with its attendant devastation of Ukrainian cities.

Germany’s Energiewende requires such heavy subsidies, from utility ratepayers as well as from government coffers, that energy costs in Europe’s most prosperous country are sky-high, compared to what American consumers pay. And depite that, Germany still must import Russian gas to keep the lights on and householders warm in the winter.

Toby Rice argues that if the Unted States ramped up gas production in four main basins — Appalachia; the Haynesville-Bossier formation, straddling the East Texas-Louisiana border; the Eagle Ford Shale in South Texas; and a smaller formation in Oklahoma, supplemented by associated gas flowing from Permian Basin oil production in West Texas and Eastern New Mexico, Americans could produce enough natural gas to supplant the growing world use of coal-burning plants to keep the lights on.

That would take a sea change in American energy policies, not only in the federal government, but also in states such as Rep. Ocasio-Cortez’ home state of New York, which have dedicated large energies fighting to block completion of pipelines to supply electric utilities and consumers in Upstate New York and New England, where U.S. Sens. Elizabeth Warren and Edward Markey have mounted intense opposition to pipelines from North American fields that would eliminate the Northeasterners’ dependence on gas imports from foreign producers.

Or, in New Jersey, where successive governors have worked to block completion of transmission lines that would ensure better supply of natural gas for power plants and end-users at prices that would cut energy bills in the Garden State.

The “Keep It in the Ground” crowd won’t like what EQT’s Toby Rice is proposing at all, because their opposition to fossil fuels is total. Unfortunately for the rest of the world isn’t listening to their arguments about a “fossil-free” future.