[Editor’s Note: Tom Wolf, the Keystone State trust-funder says he wants credit for solving the “global climate crisis” even if he has to do so on the backs of Pennsylvanians.]

The Pennsylvania legislature recently passed a resolution against joining the Regional Greenhouse Gas Initiative (RGGI) carbon tax and sent it to Wolf, who had promised to veto it (see PA House Votes to Reject RGGI Carbon Tax, Gov. Wolf to Veto). Yesterday the bill hit Wolf’s desk and he wasted no time in stamping it with a big, fat veto. The legislature likely will not have enough votes to override the veto because Wolf extorted Democrat legislators to support it, threatening to withhold money in their districts if they don’t support it (see PA Gov. Wolf Extorts Democrat Legislators to Support RGGI Carbon Tax). 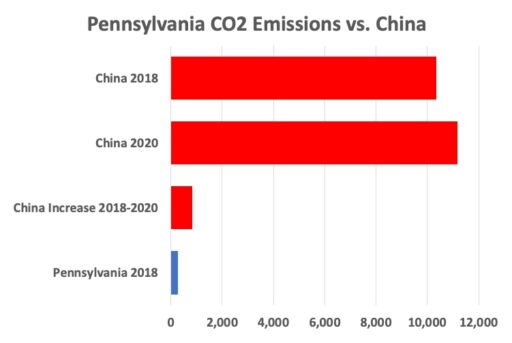 RGGI would slap a hefty carbon tax on coal and natural gas-fired electric generation plants, disadvantaging those plants over higher-cost alternatives like unreliable wind and solar. Eventually, RGGI will lead to shuttering all fossil fuel-powered electric generating plants in the Keystone State. An enormous tragedy and devastating to the state’s Marcellus industry that sells huge quantities of PA Marcellus gas to those electric plants. From the Pittsburgh Business-Times:

RGGI is a carbon-trading program that Wolf and environmental advocates say will help Pennsylvania transition to a less-carbon-intensive future and reduce harmful greenhouse gas emissions. But critics, including the energy and manufacturing industries, say RGGI won’t do enough good and will harm the economy.

That’s what majorities in both the Pennsylvania House and Pennsylvania Senate believed when, in the fall, they voted to disapprove the Pennsylvania Environmental Quality Board’s proposed regulation that would allow Pennsylvania to join 11 other states in RGGI. Senate Concurrent Regulatory Review Resolution 1 would have prevented the Wolf administration from joining RGGI.

In a veto message released Monday afternoon, Wolf took issue with the timing and said the Pennsylvania House didn’t approve the Senate’s resolution within the 30-day window. And, moreover, Wolf said, Pennsylvania’s joining RGGI was important to address the climate crisis.

“While the Republican-controlled General Assembly has failed to take any measures to address climate change, by joining RGGI, my administration will take a historic, proactive and progressive approach that will have significant positive environmental, public health and economic impacts,” Wolf said. “In addition to the environmental benefits, participating in this initiative will allow Pennsylvania to make targeted investments that will support workers and communities affected by energy transition.”

The Senate can now consider the resolution again, although it would have to pass by a two-thirds majority there and then in the House to override Wolf’s veto.

Tom Wolf tells us here why he vetoed this extremely popular legislation to kill RGGI.

So what happens now? The legislature is slow-walking the resolution. Now that Wolf has vetoed the bill, the legislature has 30 calendar days (or 10 legislative days, whichever is longer) to vote again and try to override the veto. Once the override vote fails, theoretically Wolf could consummate the deal and force the state to join.

Our best guess is that the legislature will then mount a legal challenge which will further delay the state from joining. Depending on how long the lawsuit takes, maybe (just maybe) Republicans can run out the clock until the gubernatorial election in November. If a Republican wins, RGGI in PA is dead. If a Democrat (likely the odious Josh Shapiro, currently Attorney General) wins, RGGI will happen and decimate the Marcellus industry in the state.

Editor’s Note: Tom Wolf is an elitist non-entity whp aspires for recognition of his superior virtues. To grasp his uniquely self-righteous attitude, check out this from his veto message (emphasis added):

I am vetoing, disapproving, and returning the Concunent Resolution because [RGGI] is a vital step for Pennsylvania to reduce carbon emissions and achieve our climate goals. Addressing the global climate crisis is one of the most important and critical challenges we face…

While the Republican-controlled General Assembly has failed to take any measures to address climate change, by joining RGGI, my Administration will take a historic, proactive, and progressive approach that will have significant positive environmental, public health, and economic impacts. In addition to the environmental benefits, participating in this initiative will allow Pennsylvania to make targeted investments that will support workers and communities affected by energy transition.

This nothing less than patheric—pure Tom Wolf. He’s pretending to speak for Pennsylvanians who will be dramatically and negatively affected by this absurd virtue signaling. Meanwhile,  China completely ignores the “climate crisis” and builds power plants at a record pace. It  wipes out any tiny irrelevant impact from RGGI numerous times over. Tom Wolf is betraying the Commonwealth to swell his trust-funder ego.