Tom Wolf and His RGGI Will Drive Energy Prices Ever Higher!

[Editor’s Note: Tom Wolf will be the “lone wolf” still defending RGGI when it has driven Pennsylvania’s energy prices to the highest ever, but at least he’ll finally be gone.] 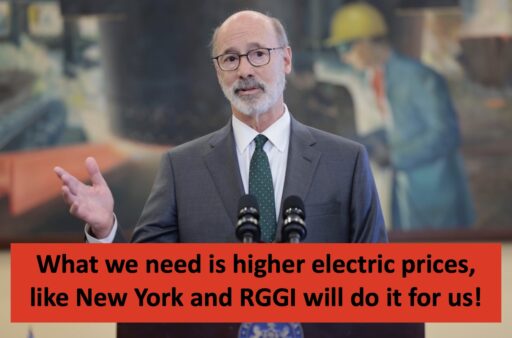 Despite a majority opposition from the state legislature, Wolf is forcing Pennsylvania to participate in the Regional Greenhouse Gas Initiative (RGGI)—a compact in which member states impose a carbon tax on energy production. By discouraging energy production in Pennsylvania, the carbon tax would shut down some of the most efficient coal and natural gas operations in the world, and a new lawsuit argues that the governor’s plan will lead to an increase in CO2 emissions.

The petitioners, all of whom operate gas-fired power plants in Bucks, York, and Westmoreland Counties, are among the dozens of businesses, labor unions, trade organizations, and politicians asking the court to stop Pennsylvania’s participation in RGGI.

Pennsylvania natural gas producers are among the cleanest in the world, as measured by methane emissions from their operations. Of the top nine hydrocarbon-producing basins in the United States, the Appalachian Basin, which includes Pennsylvania, emits the least methane per unit of energy produced.

And while U.S. coal-fired plants are among the least polluting worldwide, Pennsylvania operators have invested billions of dollars in equipment to further reduce water and air pollution. The Homer City power plant, for example, spent $750 million over the past decade on reducing pollutants.

But RGGI would undo our progress toward cleaner energy by imposing prohibitive costs on Pennsylvania energy producers.

RGGI requires power plants to purchase carbon allowances, and those have more than quadrupled in recent months. For just a portion of 2022, estimated allowance costs have risen to $847 million from the Wolf administration’s original forecast of $198 million.

Costs imposed by RGGI will force Pennsylvania plants to decrease energy production, opening the door for less efficient plants in non-RGGI states to replace them. Overall emissions will increase because less efficient plants must burn more fuel to produce the same amount of electricity—generating higher emissions of carbon dioxide and pollutants like sulfur dioxide.

The petitioners note that “most of the benefits…arising from Pennsylvania joining RGGI will be lost or shifted to other areas due to increased emissions in other states.”

Prior studies have confirmed that transfer of emissions from RGGI states to non-RGGI states.

Quadrupling carbon allowance prices also means that RGGI will further inflate electricity costs. Energy producers will have to pass the increase in costs to consumers.

RGGI is currently on hold thanks to a preliminary injunction, and the petitioners are integrating their lawsuit with other cases aimed at stopping the state’s participation. Due to pending court action, it is unlikely that companies will need to purchase carbon allowances until the next governor’s term.

But Pennsylvania’s participation in RGGI—with its far-reaching consequences—shouldn’t rely on lone-wolf tactics. The state legislature has taken the first step toward introducing a constitutional amendment that would prevent any governor from unilaterally imposing regulations, like RGGI, despite legislative disapproval.

If approved by the legislature and a majority of Pennsylvania voters, this constitutional amendment could safeguard families from ineffective and expensive regulations like RGGI.

Reposted from Delaware Valley Journal with permission of the author.