[Editor’s Note: New York has no clue what it’s doing in developing industrial solar facilities all over Upstate. A project in the Town of Conquest shows it’s just throwing money in every direction.]

I recently was asked to summarize the Climate Leadership and Community Protection Act (Climate Act) for a Conquest Against Industrial Solar meeting.  During the meeting some more issues were raised that I had not heard about before.  I passed this draft by Dan Steward who raised earlier industrial solar issues and I have incorporated his comments in the post.

I have written extensively on implementation of the Climate Act because I believe the solutions proposed will adversely affect reliability and affordability, will have worse impacts on the environment than the purported effects of climate change, and cannot measurably affect global warming when implemented.   The opinions expressed in this post do not reflect the position of any of my previous employers or any other company I have been associated with, these comments are mine alone. 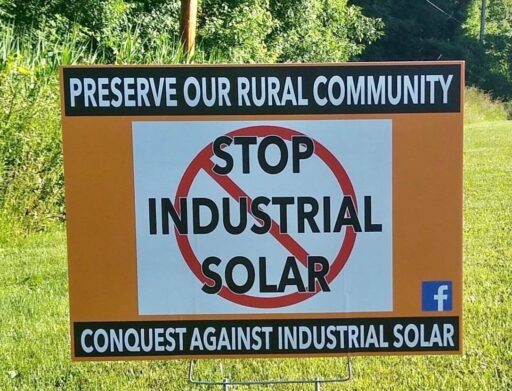 The Garnet Energy Center is a proposed 200-megawatt solar project with 20 megawatts of energy storage located in the Town of Conquest in Cayuga County, N.Y.  The developer, NextEra Energy Resources, has 22 projects in New York.  “It operates primarily as a wholesale power generator, providing power and environmental attributes to utilities, retail electricity providers, power cooperatives, municipal electric providers and large industrial companies. It owns and operates more than 21,000 megawatts of generating assets located primarily in 36 states and Canada as of year-end 2018.”

According to the July 2021 Proposed Array Layout the project area is 2,288 acres and the facility area (area within in project fence line) is 1,054 acres.  The fenced area encloses the solar arrays, inverters, energy storage modules and the project substation.  A revelation to me was that the developer only has six land owners lined up for the project and three of them provide the bulk of the property.

According to the project benefits website: “The Garnet Energy Center will create new jobs, generate long-term revenue and deliver economic development to Cayuga County and the Town of Conquest.”  During the meeting issues were raised relative to these claims that I had not previously considered.

There is a “Benefits for the Local Community” section on the website.  Consider their claims relative to other interpretations.

“Garnet is expected to provide millions in revenue to the Town of Conquest, Cayuga County and the school district to invest in infrastructure, additional services and resources for residents.”  Money is the driver for all renewable developments.  The new state siting law is called the Accelerated Renewable Energy and Community Benefit Act and implies that the affected communities will get a windfall of additional money, just like this proposed benefit.  Unsaid is the likelihood that the money to the school districts will likely be offset by decreases in state aid.  In other words, some of this money could be a wash.

“The project will create three to four full-time positions and 250+ jobs during construction.” On the other hand, six farms will no longer be active.  That means at least six full-time farming positions will be lost.

In addition, Dan points out that when this project takes cropland out of production it will force other less productive, more environmentally sensitive land to be farmed.  Moreover, farm communities rely on a network of support businesses- equipment dealers, feed mills, crop input retailers, hardware stores, veterinarians, nutritionists, crop advisors, accountants and other professionals.  When communities lose farms, they eventually lose all of these services.  Garnet claims that land used for industrial solar can be brought back into production.  This may be true, albeit at large expense.  However, when a community loses its agricultural support community, it is never coming back.

“The project will invest a substantial amount of money in construction labor, creating employment opportunities for those in the construction trades, including equipment operators, truck drivers, laborers and electricians.”  While that will be the case the fact is that Conquest, NY is a vey rural area.  When this project is completed those construction trade opportunities will move on to another area, likely too far for anyone in the affected community to commute.

Finally, the developers claim that Garnet will provide support for local farmers.  “Through land agreements, Garnet Energy Center will support the agricultural economy by infusing revenue into family farms and diversifying their income. This income saves farm jobs and will increase the economic activity from these essential local businesses.  The Garnet Energy Center will support family farms in the Town of Conquest.”  However, a quick look at the July 2021 Proposed Array Layout shows that the solar arrays completely cover the properties of the farmers who are renting their land for the project.  That is not diversification of income it is replacement of farming income with rental payments.

Dan points out there are there are unintended, far-reaching consequences of this land conversion.  Although the increase in rental payments personally benefits the landowner, other positive community impacts of farming are lost. The farm will no longer spend money in the local community for the seed that would have been planted, the fertilizer that would have been applied, or the crop protection services provided by a local retailer.  The opportunity for skilled farmworkers to ply their trade is also lost.  Farms that have invested in facilities and machinery have fewer acres to spread that investment over. Mechanics that repair that equipment see their client base shrink.  When all of these inputs are added up, non-rental cash costs for an acre of corn are well over $500 per acre.

This strategy is a day late and a dollar short relative to the land rush of renewable development grifters rushing into the state to glom onto the current policy of building as much as possible as quick possible without any plan.  The fact is that wind and solar energy siting requires much more land than available at any of the priority development areas simply because wind and solar energy are diffuse and require large areas to collect it. As a result, much development will take place in priority conservation areas.  In addition, one of the strategies to sequester carbon to meet the net-zero target is to enhance soil productivity in agricultural areas and it is clear that there is a dis-connect between that strategy and the current land grab of prime agricultural land for solar development.

Many of my relatives were farmers and I can certainly understand why a farmer would prefer to rent their land for a guaranteed income free of the many risks and intensely hard labor needed to survive.  It is incumbent upon the state to understand that while the farmers who rent their land make out well that there are downsides to solar development on the community and neighbors.  The characterization by Garnet Solar that the project will support the agricultural economy overall is simply wrong.  It will reduce farm jobs and the economic activity may be improved during construction but once the facility is operational there are very few economic benefits to essential local businesses.

There is no master plan for the Climate Act.  The scoping plan that is supposed to be completed by the end of the year will present policies but there is no overall strategy to balance all the requirements of the Climate Act.  All the currently proposed industrial solar projects are being developed without direction.  It is unlikely that this will work out in the best interests of the state, affected communities, or neighbors to the projects.