In March 2019, MDN told you about a new Williams plan to beef up the Transco pipeline in Pennsylvania and New Jersey to deliver an extra 829 MMcf/d of Marcellus gas to PA, NJ, and Maryland (see Williams Announces Transco Competitor to PennEast Pipe in NEPA).

The project, called the Regional Energy Access Expansion (REAE) project, was aimed at competing with the PennEast Pipeline project by flowing gas from northeastern Pennsylvania to the Trenton, NJ, area. PennEast got canceled after stiff opposition from liberal state officials in New Jersey. REAE is also facing opposition in NJ (see Williams’ PennEast Pipe Competitor Hits a Brick Wall in New Jersey). However, after a looooong and winding road, the Federal Energy Regulatory Commission (FERC) on Wednesday approved the project. This is a major victory!


The leftist radicals who control the State of New Jersey (like a Mafia) ginned up a fake study to say the state doesn’t need any more natural gas than it already has. FERC commissioners saw right through that lie (saying as much in their comments). 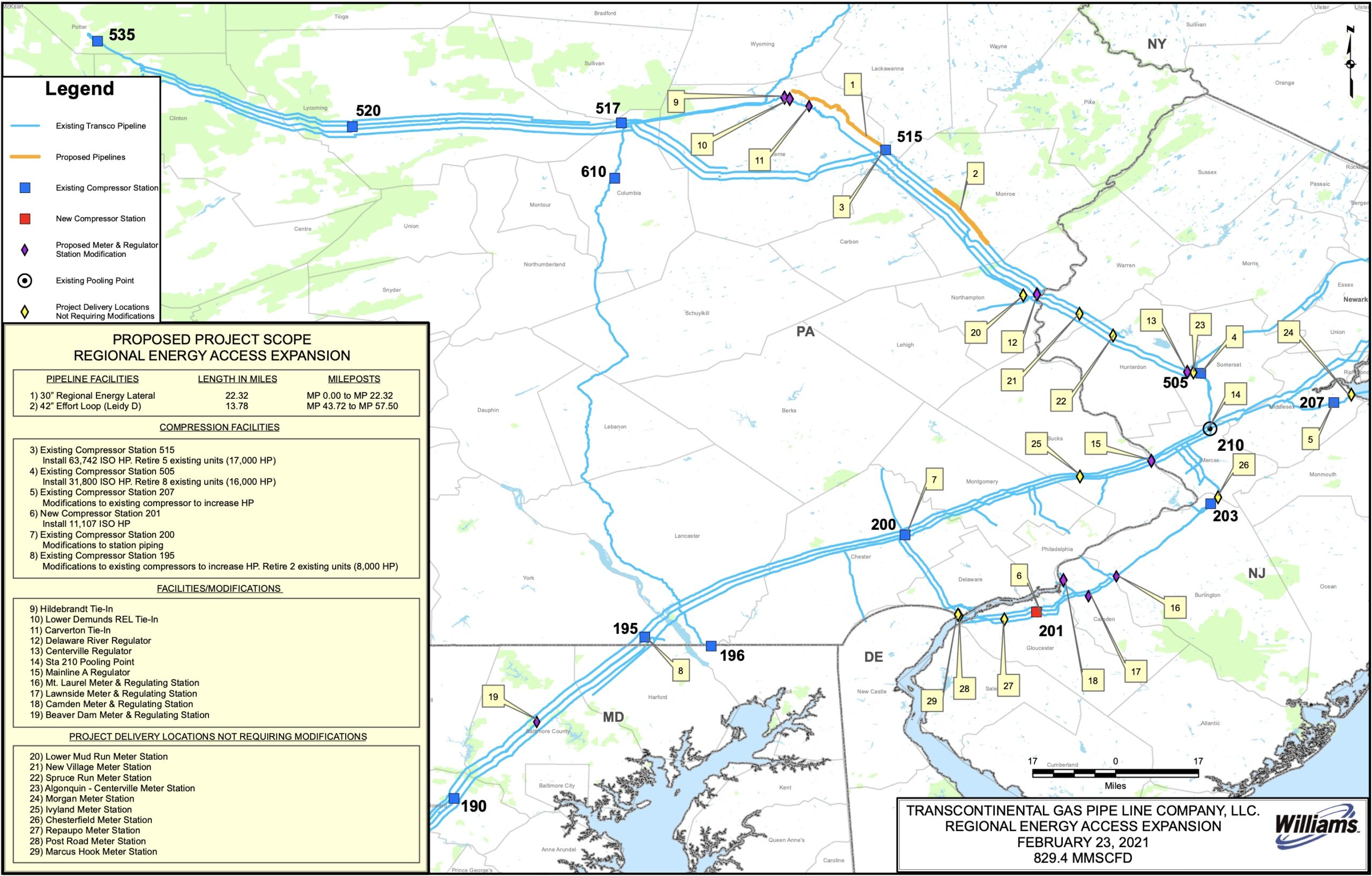 In early November, Williams CEO Alan Armstrong sent an open letter to then-Chairman of FERC, Richard Glick, telling Glick the agency needed to approve the REAE project by Nov. 30th of last year–or the project would be delayed for yet another year (see Williams CEO Pressures FERC’s Glick to Approve NE Pipe Expansion NOW). Question: What happens with this week’s approval coming roughly 45 days after Armstrong’s ultimatum? Will REAE be delayed a full year? We don’t know the answer but will be on the lookout.

RTO Insider has the news, including the reaction by FERC commissioners:

FERC on Wednesday approved an expansion of the Transcontinental Gas Pipeline (Transco) despite a study from New Jersey state agencies finding it was not needed and that its utilities should use alternative sources of supply (CP21-94).

The Williams Companies’ (NYSE:WMB) proposed Regional Energy Access Expansion project includes upgrades to the existing pipeline in Pennsylvania and New Jersey to increase deliveries to the East Coast by 829,400 dekatherms per day, mostly into New Jersey, at a cost of about $950 million. The Transco pipeline includes 10,000 miles of pipe that bring gas from Texas and other areas on the Gulf Coast to New York City.

The New Jersey Board of Public Utilities and the Division of Rate Counsel argued that new capacity is not needed for the local distribution companies who signed contracts with Transco. The BPU commissioned a study from London Economics International that found that LDCs can easily meet their firm winter demands through 2030 using existing pipeline capacity. The board has directed them to consider non-pipeline alternatives to ensure they have enough gas capacity.

The New Jersey agencies’ arguments were backed by several environmental groups, who noted that the state is working to get to net-zero carbon emissions by midcentury.

Transco hired Levitan & Associates to do its own study, which found that LDCs in New Jersey and the Philadelphia area would fall short of needed supplies starting this decade and that the situation would only get worse without new infrastructure.

FERC said it found both studies useful in its decision, but it noted that they have different inputs that may reflect differences in risk tolerance for meeting demand on extremely cold days.

“After due consideration of both studies and other evidence as discussed, the commission finds that the construction and operation of the project will provide more reliable service on peak winter days and will provide cost benefits by increasing supply diversity,” FERC said.

Sierra Club argued that the pipeline was not needed because both Pennsylvania and New Jersey have laws that require cutting greenhouse gas emissions by 80% by 2050, but FERC said that is not enough to undermine its finding that Transco had demonstrated a need for the project. Some of the gas would flow to other states including Maryland, Delaware and New York, the commission noted.

The order drew additional statements from three of the four FERC commissioners.

While ultimately concurring with the order, Commissioner James Danly dissented from the majority’s decision to stay the project’s certificate so that the commission could process any requests for rehearing. He also argued that the commission should focus on precedent agreements as the main way for showing a project’s need, something that FERC under former Chair Richard Glick had proposed not to do.

Commissioner Allison Clements also concurred with the order while highlighting what she called the “inadequacies” of FERC’s 1999 policy statement on natural gas pipeline certificates.

Clements also argued that FERC should have given more weight to the BPU’s study finding no new pipeline capacity is needed in the state because she said the agency is the main regulator of the gas utilities that have signed up for 56% of the project’s capacity.

Commissioner Mark Christie wrote separately to concur with the commission’s decision to grant the BPU’s motion to intervene out of time, saying that “the views of state officials are always due respectful consideration.”

However, the former Virginia utility regulator said that the BPU’s views in the case were “somewhat less than clear” because it did not explicitly ask FERC to reject the project, only to accept the findings of its study that new pipeline capacity was not needed.

“Even assuming the NJBPU is implicitly opposed to the project, the record does not indicate that the NJBPU submitted any information explaining why the local gas distribution companies in New Jersey, which entered into contracts to take natural gas supply from this pipeline — LDCs which the NJBPU regulates — were wrong to do so or could have obtained alternative sources of gas supply to serve their residential, commercial and industrial customers,” Christie said.

A copy of the FERC order issuing a certificate approving REAE may be found here.