Justin Trudeau is the boy wonder socialist running Canada about as well as White House occupant Joe Biden runs America and his energy program is the worst of it.

There is an election going on in Canada and Justin Trudeau, the nation’s supposed leader, is running again. He is a boy wonder socialist, of course, having no thoughts that are not politically correct and no policies that are not destructive. Among the worst is his energy program, recently addressed by the Canadian Energy Centre, which is “an independent provincial corporation that is primarily supported by the Government of Alberta’s industry-funded Technology, Innovation and Emissions Reduction (TIER) fund.” 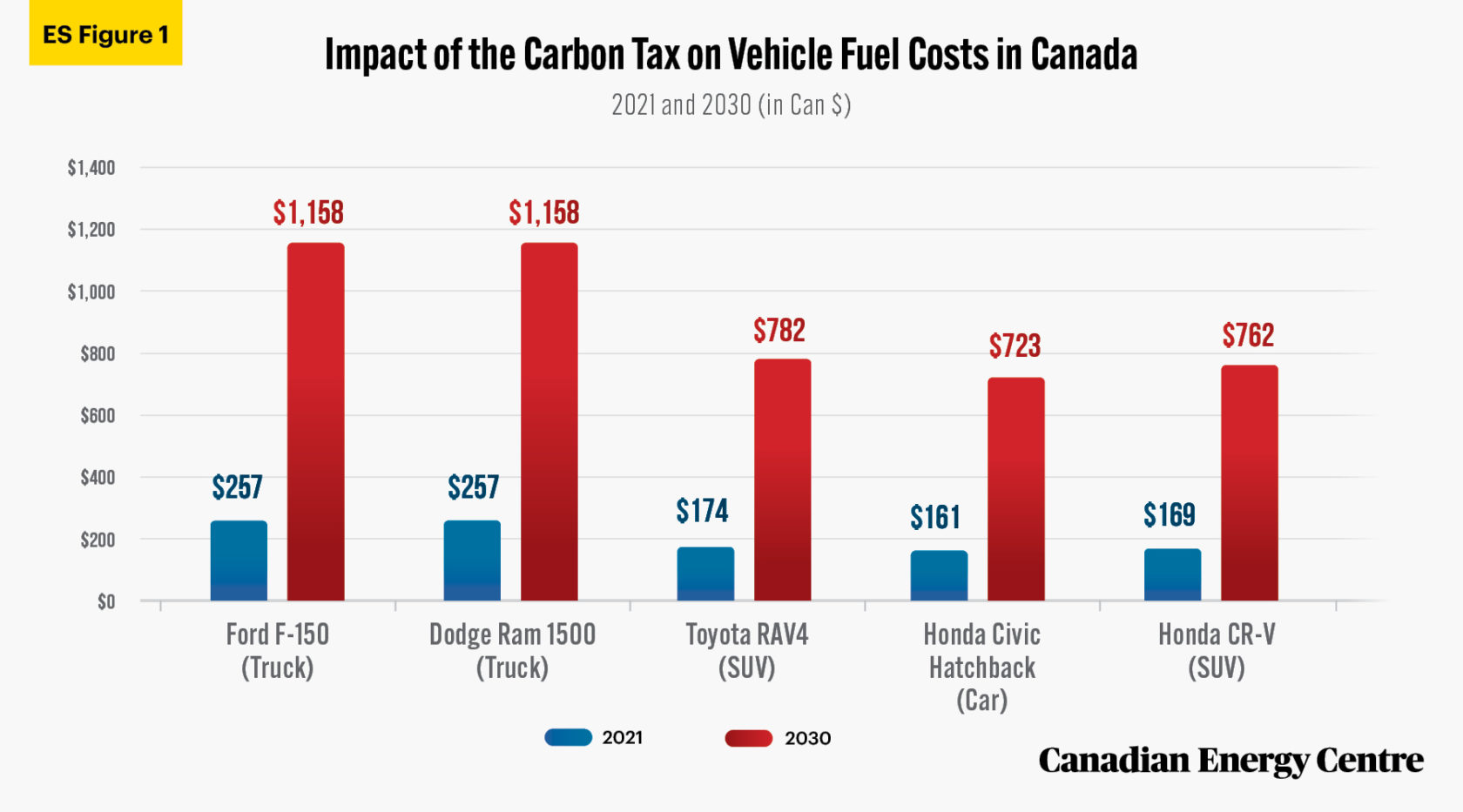 The Centre just released an analysis of what Justin Trudeau’s proposed carbon tax increases will mean to Canadians and how this insidious tax once gets its foot in the door, governments abuse it to punish ordinary consumers and reward corporatists hoping to score with green eggs and scam. Pennsylvanians should attention; this is what Tom Wolf wants for you! Here’s what the Centre has found:

With the exception of a few blessed spots in southern Ontario and southern British Columbia, Canada is a cold northern country. That means that for six months of the year or more, snow can pile up on streets, highways, your driveway, and condominium and apartment exit ramps. And if one takes a trip beyond urban Canada any time of the year, it sometimes helps to have a sturdy vehicle that manoeuvres well on mountain roads in case of a late or early-season snowfall.

Which might explain, along with work necessities for many Canadians – such as hauling tools and equipment – why four of the five most popular vehicles in Canada are either trucks or SUVs: Many people need a vehicle that beats back winter and can haul their kids to hockey, and much else.

An inconvenient fact: The most popular vehicles in Canada will be paying much more in carbon taxes in coming years compared to now. And that will be on top of existing federal, provincial and local gasoline taxes.

As with most vehicles, excepting a few e-versions, those five top sellers and all others need gasoline or diesel. That also means Canadians from coast-to-coast pay federal and provincial gasoline taxes at the pump. In some cities, local taxes are also piled on.

More recently, federally, the carbon tax has also been applied at the pump at 8.8 cents a litre in all provinces where a provincial carbon tax is not in play. (In British Columbia, the rate is slightly higher at 9.96 cents per litre under the B.C. carbon tax regime.)

As announced in 2020, that federal carbon tax at the pump will more than quadruple over the next nine years from 8.8 cents per litre, to 39.6 cents.

What does that mean for the five most popular vehicles in Canada and their carbon tax “payout” at the pump?

Here’s the rundown of current annual fuel costs for all five vehicles and the present carbon tax costs compared with what owners of such vehicles will pay in the future. These are national, annual averages, and the carbon tax increase (from 8.8 cents per litre to 39.6 cents) is a 350 per cent increase in that tax.

The increase in the carbon tax from 8.8 cents to almost 40 cents per litre will affect the Honda Civic the least, but it will still be substantial. At present, Honda Civic drivers pay $2,453 annually in fuel costs, with $161 of that the carbon tax. By 2030, annual gasoline costs for that Civic will be $3,015, with fully $723 of the bill due to the increased carbon tax. That’s $562 higher.

A few caveats: All this assumes a steady price in base fuel costs. That is unlikely. As oil companies are pressured to exit the business over the next decade, per barrel costs will likely rise. (Similar demand chasing fewer barrels leads to higher prices).

Also, while the increase in carbon tax costs might be partly offset by increased government rebates, that’s yet to be determined. Increasing carbon tax rebates would in fact be counter to the underlying justification offered up by governments who impose carbon taxes: Hike carbon taxes to discourage driving and other carbon-intensive activities.

In addition, none of the above includes the effect of the so-called Clean Fuel Standard which if imposed in future years, will add 15 cents a litre in for gasoline according to calculations from Canadians For Affordable Energy.

Lastly, our estimates of higher fuel costs assume a 2021 to 2030 comparison. The rise in carbon taxes could start before then so annual costs start to rise sooner. It is also possible the full 350 per cent increase in carbon taxes at the pump could be enacted earlier than 2030.

Mark Milke and Lennie Kaplan are with the Canadian Energy Centre, an Alberta government corporation funded in part by carbon taxes. They are authors of the report Up to 350 Per cent Higher at the Pump by 2030: The Impact of Higher Carbon Taxes on Gasoline Prices.

This story is about gasoline, of course, but don’t think Justin Trudeau doesn’t want to punish natural gas users, too. Here’s what Conrad Black observed last year about the Trudeau energy program:

Regulation and legislation include the cancellation of the fully authorized Northern Gateway Pipeline, the indefinite delay of the expansion of the Trans Mountain Pipeline, the disbanding of the National Energy Board and its replacement by the Canadian Energy Regulator and the Impact Assessment Agency, which facilitates unlimited interventions even by disinterested parties and by foreigners acting on conceptual or philosophical motives. The enabling legislation for this was described by Alberta Premier Jason Kenney as the “no-pipelines bill.” The federal government also banned oil tanker traffic off the West Coast (Bill C-48), an outright effort to landlock western Canadian oil, and by imposing absurd delays it forced TC Energy to relinquish its Energy East project. Canada continues to be a large oil importer despite having an oil surplus — we are a national chump… Clean fuel standards will reduce carbon emissions in the activity of a producing carbon emissions and is a method of gradually strangling carbon use. The expansion of protected and conserved areas will take place in the framework of the federal government goal’s of having 17 per cent of Canada’s landmass and of its waters in such areas by the end of this year, as part of this government’s commitment to the United Nations convention on biodiversity. This program includes designated National Wildlife Areas on federal government land.

The flavour of the resulting administration may be grasped from the stipulations in Section 3 of the Wildlife Area Regulations that, “No person shall hunt or fish, be in possession of any firearm, slingshot, bow and arrow, or any instrument that could be used for the purpose of hunting, or lead fishing sinkers. No one shall damage or remove a plant, carry on any agricultural activity, allow any domestic animal to run at large, swim, picnic, camp or engage in other recreational activity or light a fire, operate a conveyance, remove, deface or damage any artifact, natural object, building, fence, poster, sign, or carry on any commercial or industrial activity, disturb or remove any soil, sand, gravel or other material, unless authorized by the minister.” (Breathing and speaking in a low voice are permissible.) Among these National Wildlife Areas are Indigenous protected and conserved areas, which are governed by Indigenous people committed to conservation and in which Indigenous rights and responsibilities are entrenched.

These policies, of course, come from the mind of a typical spoiled child emblematic of the trust-funders who ruin so much in today’s world. Will Canada re-elect this brat? Will Tom Wolf, Pennsylvania’s own trust-funder, get his RGGI initiative through? Let’s pray it’s a big “NO” on both! The good news, regardless, is that the Canadian Energy Centre is actually financed by an existing carbon tax, showing just far Alberta’s views diverge from the boy Trudeau. What rich delectable irony!