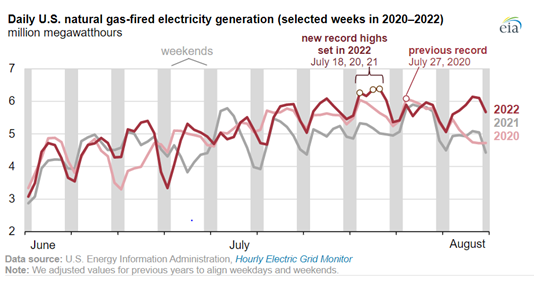 The capacity additions have helped utilities across the nation meet the peak summer demand so far, as EIA continues:

This upward trend underscores the importance of natural gas in the growing energy transition. Its role as a firm energy resource kept the grid supplied with enough energy to meet peak demand, despite grid operators warning of potential rolling blackouts this summer. According to Jim Robb, CEO of North American Electric Reliability Corporation (NERC), the organization who issued the reliability report warning of power outages:

“’This clean energy transition is doable. It needs to be done at a managed pace,’ he says. Bringing more wind and solar onto the grid, without focusing on how to back it up, could cause outages, Robb says. For now, natural gas is often the power source for times the wind is not blowing and the sun is not shining, according to NERC.”

EIA’s expectation that wind and solar would be the only energy sources that would experience gains in electricity generation this summer didn’t come to pass because a number of broad economic factors limited renewable growth in the short term. But as more renewables come online, natural gas resources will be necessary to support burgeoning renewable infrastructure and make up for further retirements of firm power generation.

From playing a leading role in reducing carbon emissions, to supporting a durable and reliable electric grid during the buildout of electric vehicles, natural gas will be a vital solution to a low carbon, affordable energy future.

Bottom Line: The trend toward increased use of natural gas is here to stay. Natural gas has played a leading role in the push toward cleaner, more responsible energy, and is a solution to secure both domestic and global energy demands. Failure to include natural gas in the energy future exposes U.S. energy security to overseas supply chains and threatens to leave residents in the dark.