U.S. Solidifies Its Spot As World’s Top LNG Exporter In 2022

The United States officially took the title of the world’s top liquefied natural gas exporter in the first half of 2022, according to recent data from the U.S. Energy Information Administration.

Amidst a global energy crisis that has seen countries across Europe look for alternative sources of energy, the United States exported an average of 11.2 billion cubic feet per day, a 12 percent increase from the second half of 2021. 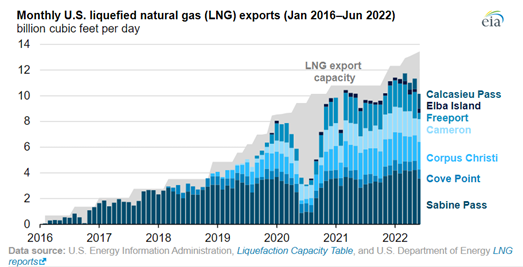 With domestic natural gas production reaching record levels thanks to the Shale Revolution, the United States began exporting LNG in 2016 from the lower 48 states and became the world’s biggest exporter of the resource by the end of 2021 for the first time in history.

World-wide energy insecurity has raised demand for U.S. LNG and driven an increase in exports over the first six months of 2022. In the end of June, the United States hit another milestone when U.S. LNG exports surpassed Russian natural gas exports to the European Union.

The Russian invasion of Ukraine has left Europe in a place of energy insecurity making U.S. LNG vital to maintaining normalcy and daily functions. With international natural gas prices increasingly high and decreasing imports via pipeline from Russia, U.S. LNG imports in the European Union and United Kingdom increased by a whopping 63 percent during the first half of 2022. In fact, 71 percent of U.S. LNG exports have gone to the EU and UK to help relieve energy storage and to fill low natural gas storage inventories in preparation for the winter.

The rise of the United States as a top natural gas exporter is truly remarkable, especially when considering just twenty years ago the country was facing its own natural gas shortages. And while a host of factors will play into whether or not America can maintain its top spot, including permitting for additional capacity and constructing the necessary infrastructure to support it, it is clear that U.S. natural gas will play a pivotal role in increasing global energy security and decreasing emissions across the world.