With the current energy crisis worsening, the United Kingdom and Europe are looking to winter with trepidation and an increased focus on building up energy inventories. LNG imports – particularly from the United States – are filling the gap for Europe’s immediate energy needs and storage demands ahead of the cold season, causing price increases that leaders are attempting to address.

For Europe as a whole, LNG remains a vital lifeline with floating terminals taking a much shorter time to install than building pipelines and providing for a shortfall in countries’ own domestic energy production issues. From France’s closure of several nuclear plants for maintenance to Scandinavia and many southern European nations suffering from a severe drought impacting the hydroelectric sector, natural gas is keeping the lights on.

Most of this is from the United States, with around 60 percent of U.S. LNG or 115 kilotons per day going to Europe in August, according to Vortexa, commodities data company.

Despite the acute demand in Europe, and the abundant supply of LNG in the United States., U.S. Energy Sec. Jennifer Granholm has said reinstating export bans are not off the table.

When it comes to oil – which Europe is also importing in large quantities from the United States – the Secretary recently urged refining companies to limit fuel exports and place greater priority on boosting domestic fuel reserves:

“Given the historic level of U.S. refined product exports, I again urge you to focus in the near term on building inventories in the United States, rather than selling down current stocks and further increasing exports.”

Just months ago, Sec. Granholm met with U.S. refiners and conceded that export restrictions were not an effective long-term solution to high domestic energy prices. However, the renewed threat of limited U.S. exports should put Europe on edge.

European countries are scrambling to fill up their storage facilities above their peak stocks. The entirety of the European Union collectively currently boasts around 888 terawatt hours (TWh) of natural gas in storage with a large volume of gas reserves consisting of LNG imports from the United States and Asia. 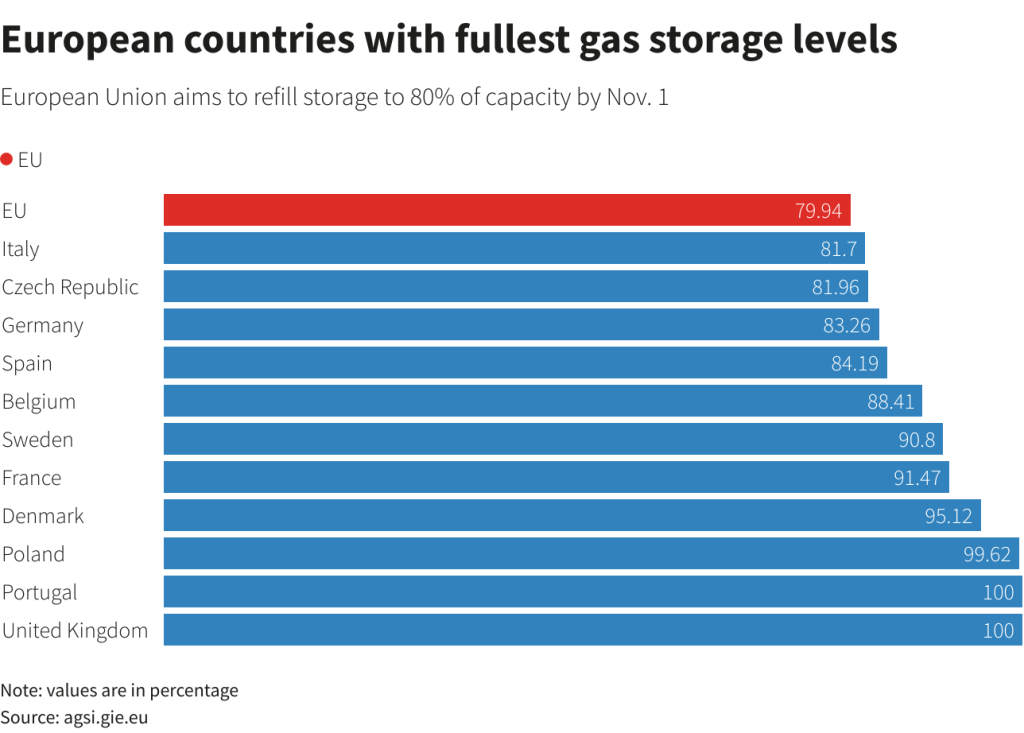 Current reserves have already surpassed peak stored levels ahead of last winter, but the lack of domestic energy production and decline in regional electricity generation are driving policymakers to purchase surplus stocks.

On Monday, European Commission President Ursula von der Leyen announced that the EU is planning an ‘emergency intervention’ in the bloc’s energy markets as spiralling natural gas prices look set to continue this winter and long into next year. And as winter approaches, the Czech Republic, which holds the rotating EU Presidency, is proposing something unimaginable less than a year ago, advocating for the EU to establish a ‘cap’ on natural gas prices used for electricity generation.

In the UK last Friday, Ofgem, the energy industry regulator, announced that the annual price cap for a household’s energy bills will increase to £3,549 (USD $4,121.10), an 80 percent increase on the price cap announced in April, reflecting the increase in wholesale gas prices.

These proposals come off the back of energy costs on the continent spiking nearly tenfold in the last 12 months, with the European electricity benchmark soaring to €1,000 (USD $1,161.20) per megawatt hour for the first time in history.

In the UK, it will be up to the new Prime Minister to provide a long-term strategy for energy security. The favoured candidate, Liz Truss, will reportedly approve a series of oil and gas drilling licenses in the North Sea as one of her first acts as Prime Minister. She recently said:

“We will end the effective ban on extracting our huge reserves of shale gas by fracking but be led by science, setting out a plan to ensure communities benefit.”

Regarding onshore hydraulic fracturing, Truss indicated that there would need to be clear benefits to communities where production would take place. UK energy firms have responded by creating plans that provide financial incentives to residents living nearby well sites. Truss has ruled out any additional windfall tax on energy producers.

Truss’s commitment to restart fracking and double down on North Sea production would signal a remarkable about-face for the UK. The nation banned fracking in 2019, and while the previous Conservative government opened the door to a fracking resurgence, it never materialized.

Bottom Line: Europe’s demand for energy and energy security is causing a run on natural gas supplies to stave off a cold winter. U.S. LNG is helping to keep the lights on across the United Kingdom and Europe, but as wholesale prices and downstream electricity prices rise, policymakers are looking to unexpected solutions to keep prices affordable.