Wake Up America! China Is Making Fools of Us on Energy!

…
[Editor’s Note: China is running rampant over America and the West with respect to energy; playing us like fools with global warming while building up its energy advantage.]

China has pledged to peak its carbon dioxide emissions by 2030 and to reach net zero by 2060—ten years later than the developed countries of the world, who plan to reach net zero no later than 2050. Yet, in 2020, China emitted more carbon dioxide emissions than the combined total emitted by the United States, Russia, and the entire continent of Europe. China continues to build coal plants and has several hundred gigawatts in its pipeline that can operate for 40 to 60 years. It already has about 5 times the coal plant capacity that the United States has. In fact, China’s total coal generating capacity is about the same as the total generating capacity in the United States from all generating sources.

Yet, the developed nations of the world continue to allow China to build coal plants while they retire theirs prematurely and incur additional costs from building renewable plants that rely on imports of solar panels, wind turbine parts or critical minerals from China. And, to back up those intermittent sources, they buy Chinese batteries. China’s economy will continue to increase at double the rate of the developed economies, supplying them with steel, aluminum, solar panels, critical minerals, and all sorts of other goods, while the developed nations of the world pay higher energy prices and deal with the unreliability of intermittent renewable energy as a result of their preoccupation with “doing something” about climate change. 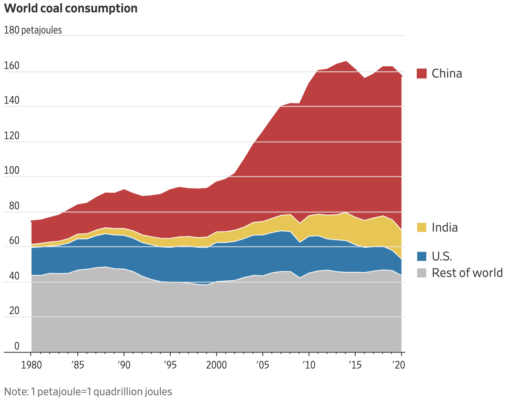 China relies on energy-intensive industries like steel, cement, and chemicals to power its growth. Coal powers around 56 percent of the country’s industry-heavy economy, a major reason China accounts for more than 30 percent of the planet’s carbon dioxide emissions. Chinese provincial governments approved 24 domestic coal plants in the first half of 2021 and Chinese localities have around 104 gigawatts in top-priority coal-power capacity planned—more than what’s currently installed in Japan and Russia combined. Provincial officials expect electricity demand to increase 4.4 percent per year for the next several years.

Getting enough energy to achieve China’s 2060 net-zero emissions target will require investments of as much as $2 trillion a year until 2060, according to UBS Group estimates. That includes more than tripling its current pace of renewable-energy installations. In 2020, China added 3.3 gigawatts of energy storage and 120 gigawatts of wind and solar capacity. However, in August 2021, China dropped its subsidies for onshore wind and solar because of the burden of subsidizing these energy sources on its economy. China indicated it would raise total wind and solar capacity to 1,200 gigawatts by 2030, which is little more than doubling their current capacity of 535 gigawatts. China cannot easily pivot away from coal until it has enough other alternatives to ensure reliable power. That is something the leaders of the developed world need to understand for themselves as well. 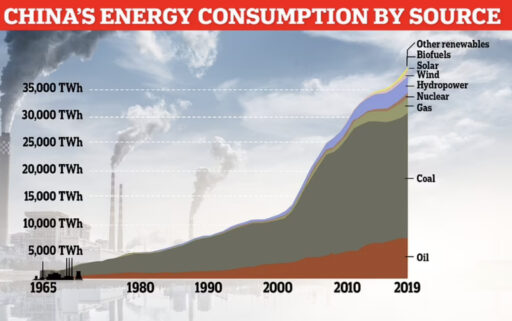 China’s recent energy crunch highlighted the need to continue building up the nation’s capacity in fossil fuels, from coal to oil and shale gas. China already burns more coal than the rest of the world combined and is the number 2 consumer of oil after the United States. According to Premier Li Keqiang, China needs to prioritize its economic development, which “holds the key to solving all its problems.” “Energy security should be the premise on which a modern energy system is built, and the capacity for energy self-supply should be enhanced,” he said. That means the twin goals of peak emissions by 2030 and carbon neutrality by 2060 should be achieved in a “sound and well-paced” manner that will require “long and hard” effort. Li hinted that a pledge to cap the country’s carbon dioxide emissions by 2030 could be torn up. Before establishing a timetable for peaking carbon emissions by the end of the decade, the country needs to conduct an in-depth assessment of how it has handled the recent power crunch, Li said.

Despite being the second largest economy in the world, China joined India and other developing economies to demand developed nations pay at least $1.3 trillion to them annually starting in 2030 for climate projects. China, India, and Indonesia submitted a document to the United Nations at the COP26 climate summit requesting the funds and indicating that half the money would go toward funding renewable energy in the developing world and half toward protecting these countries from the effects of global warming.

Whether China will meet its targets pledged to the Paris accord and COP26 is indeterminate given its recent energy crunch and its realization of the importance of energy security. Further, China is to be hit with a cold front this winter from La Niña and, in September, ordered the country’s top state-owned energy companies to secure coal supplies for this winter at all costs. Meanwhile, it will be using cheap coal-fired power to provide exports that the developed world needs to go “green” by 2050—earlier than China’s current net zero commitment of 2060.

Some Examples of China’s Market Dominance

In 2010, China cut its rare earth exports by 40 percent and cut off supplies to Japan over a territorial dispute, causing prices to soar. These actions were challenged by Japan, the United States, and the European Union, resulting in a ruling against the country’s export quotas by the World Trade Organization (WTO). The WTO ruled that the export quotas represented an unfair restriction that allowed China to control global rare earth prices. Because China does not impose the regulations on mining rare earths that other countries do, “toxic wastes from rare-earth facilities have poisoned water, ruined farmlands, and made people sick”.

A more recent example is that China’s energy problems have caused a shortage of magnesium—a product where China has a near monopoly. Magnesium is a key component in aluminum alloys, which are used in several auto-parts from gearboxes and steering columns to seat frames and fuel tank covers. In Europe, magnesium stocks have been particularly affected by the lack of supplies from China and are expected to be depleted by the end of November. China, which is Europe’s main magnesium supplier, has ordered roughly 35 of its 50 magnesium smelters to close until the end of the year to conserve power supplies, as magnesium is particularly energy-intensive to produce. There are no substitutes for magnesium in aluminum sheet and billet production, which could cause the European car market to come to a stand-still.

China is in the driver’s seat in the energy and climate change sphere and though it has made emissions assurance, it can reevaluate them at will and no country will hold them accountable. China will not let climate commitments keep it from growing its economy and providing energy for its people. China will hold leverage over the developed world if it continues to depend on China for critical minerals that are required for a “green” economy.