An analysis from the Wall Street Journal dug up the receipts and the results are clear: the federal oil and natural gas leasing program has slowed to a near standstill under the Biden administration, undermining U.S. energy production and global energy security.

“The Biden administration has leased fewer acres for oil-and-gas drilling offshore and on federal land than any other administration in its early stages dating back to the end of World War II, according to a Wall Street Journal analysis.

“President Biden’s Interior Department leased 126,228 acres for drilling through Aug. 20, his first 19 months in office, the analysis found. No other president since Richard Nixon in 1969-70 leased out fewer than 4.4 million acres at this stage in his first term.”

The drop off in leasing isn’t because a lack of interest from the industry. When the U.S. Interior Department finally held its first onshore lease sales in late June – nearly 18 months after Biden came into office – seventy percent of parcels offered received bids, totaling nearly $22 million. These high-dollar bids happened despite the administration restricting the amount of acreage offered by 80 percent and increasing royalty rates by 50 percent.

The situation for offshore leasing is even worse. For the first time in American history, Interior has allowed the existing Outer Continental Shelf 5-year offshore leasing program to expire without a new plan in place. In fact, the department only published its draft plan in July, which means the most likely scenario is that no new offshore lease sales will be held until late 2023 or 2024.

David Bernhardt, a former Interior Secretary offered a grim view of the situation in an interview with the Wall Street Journal:

“‘The president said he was going to stop leasing. And he’s been remarkably successful,’ said David Bernhardt, an energy lawyer and former Interior secretary in the Trump administration.”

The data backs up Bernhardt’s claim: 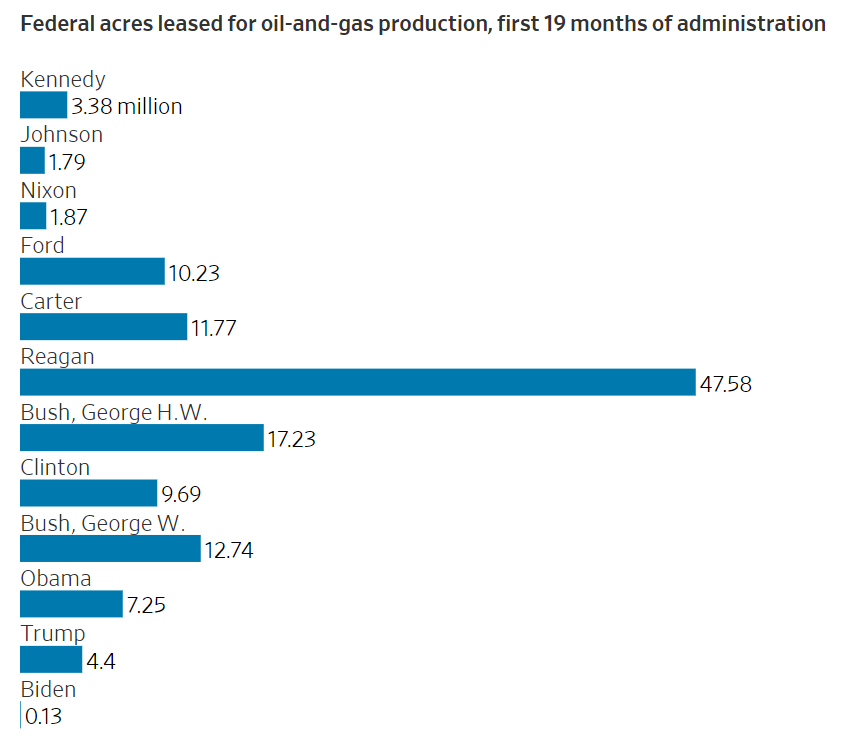 Even CNN and CNBC called out Democrats over gasoline prices and energy investments, arguing that the industry doesn’t have the confidence to make long-term investments if “the administration doesn’t even necessarily want it to be there” in the future, as CNN’s John Berman argued.

That sentiment was reflected in the Wall Street Journal’s analysis, which noted that a lack of lease sales today will impact production down the line:

“So far, the drop-off in new leases hasn’t been a factor in the supply issues that helped send gasoline and other energy prices to historic highs earlier this year, since oil typically takes years to reach the market after federal leases are approved, analysts say. Even so, new leases are needed to maintain supply later, potentially helpful in averting future shortages and price surges, energy industry leaders say.

“‘The leases are kind of our raw material,’ said Stephen Green, who oversees exploration and production for Chevron Corp. in North America. ‘Chevron or the industry needs a predictable source of raw material.’” (emphasis added)

Biden’s campaign against the federal leasing program comes amid a global energy crisis and as American drivers paid record high gasoline prices this summer, and denying much needed revenue for federal, state, and local treasures from the royalties, rents, and bonuses from federal leasing.

Yet, the administration has consistently sent mixed messages, undercutting the certainty in U.S. energy policy.

The post Wall Street Journal Reveals that Federal Lease Sales “Slow to a Trickle Under Biden” appeared first on .