[Editor’s Note: Five dirty companies in bed with the World Economic Forum aim to force us into a corporatist world where fossil fuels are out. West Virginia says they’re out.]

Boom! The hammer has dropped on five of six companies identified by West Virginia as engaging in “boycotts of fossil fuel companies.” In June, WV State Treasurer Riley Moore sent a letter to six big banks/investment firms alerting them they are about to be added to the state’s “blacklist” for violating policies by not investing or doing business with fossil fuel companies (see WV Threatens 6 Banks for Breaking State Anti-Fossil Fuel Law). All six protested, begging WV not to blacklist them, which would end WV from doing business with them (see Big Banks Object to Being Outed by WV as Fossil Energy Haters). The verdict is in, and five of the six have been found guilty and remain on the blacklist. 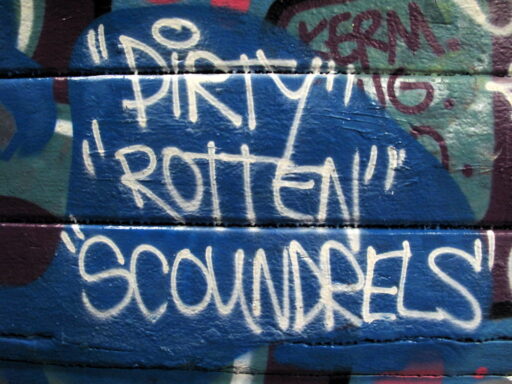 The original six are:

Only U.S. Bancorp was given a pass. The other five are now banned from getting new contracts from the entire state of WV. The damage (for the dirty five) is not in losing a bunch of money in doing business with a relatively small state. The damage is the fear this will spread to other “red” states that have had enough of the radical left’s agenda of defunding fossil energy in this country. These companies, now outed for all to see, are petrified this type of effort will spread to states like Texas and other big energy states.

We say it’s about darned time we fought back! The only thing these sleazy leftists understand is hitting them in the bank account.

Treasurer Moore has determined that BlackRock Inc., Goldman Sachs Group Inc., JPMorgan Chase & Co., Morgan Stanley and Wells Fargo & Co. are engaged in boycotts of fossil fuel companies, according to a new state law, and are no longer eligible to enter into state banking contracts with his Office.

“As Treasurer, I have a duty to act in the best interests of the State’s Treasury and our people when choosing financial services for West Virginia,” Treasurer Moore said. “Any institution with policies aimed at weakening our energy industries, tax base and job market has a clear conflict of interest in handling taxpayer dollars.”

Earlier this year, Treasurer Moore recommended and lawmakers passed Senate Bill 262, which authorizes the Treasurer to publish the Restricted Financial Institution List on his website and disqualify any financial institution on the List from state banking contracts. In preparing the List, the Treasurer’s Office reviewed publicly available environmental and social policy statements published by financial institutions that are currently authorized to do business with his Office as approved state depositories or sweep account providers for the State’s short-term funds.

Six financial institutions were initially identified as potentially engaged in boycotts of energy companies and provided with written notice. These institutions then had 30 days to submit additional information disputing their potential inclusion on the Restricted Financial Institution List. All six institutions submitted responses, which the Treasurer reviewed alongside each institution’s public policy statements.

Out of the six financial institutions initially noticed, U.S. Bancorp was not placed on the List because it demonstrated to the Treasurer that it has eliminated policies against financing coal mining, coal power and pipeline construction activities from its Environmental and Social Risk Policy.

“Each financial institution placed on the Restricted Financial Institution List today has published written environmental or social policies categorically limiting commercial relations with energy companies engaged in certain coal mining, extraction or utilization activities, rather than considering the financial or risk profile for each company,” Treasurer Moore said. “These policies explicitly limit commercial engagement with an entire energy sector based on subjective environmental and social policies.”

West Virginia annually collects hundreds of millions of dollars in coal and other fossil fuel severance taxes, typically representing the third-largest revenue source for the state’s General Revenue Budget. During the most recent fiscal year, the nearly $769 million in severance taxes paid by coal, oil and natural gas companies accounted for 13 percent of the $5.89 billion in General Revenue funds collected by the state – and that does not include income and other taxes also collected from the employment and economic activity these fossil fuel industries generate.

A recent report published by the West Virginia University College of Business and Economics found that in 2019, coal mining and coal-fired power generated $13.9 billion in total economic activity and supported nearly 33,000 jobs in West Virginia.

“While the ‘Environmental, Social and Governance’ or ‘ESG’ movement might be politically popular in California or New York, financial institutions need to understand their practices are hurting people across West Virginia,” Treasurer Moore said. “I simply cannot stand by and allow financial institutions working against West Virginia’s critical industries to profit off the very funds their policies attempt to diminish.”

Is there any “get out of jail free” card for the Dirty Five? Yes. According to Moore, “if the institution demonstrates that it has ceased all activity that boycotts energy companies” it will be taken off WV’s blacklist. Don’t hold your breath.

West Virginia has taken the dramatic move of deeming five financial institutions ineligible for state banking contracts on the grounds that they “boycott” fossil fuel companies.

The restricted financial institution list released Thursday includes BlackRock, Goldman Sachs, JPMorgan Chase, Morgan Stanley, and Wells Fargo — many of the biggest financial firms in the world. The determination was made by West Virginia Treasurer Riley Moore’s office and is effective Thursday.

As the blacklist goes into effect, all five firms will no longer be eligible for state contracts and any existing contracts will be void. The news means the firms will lose access to $18 billion in annual inflows and outflows.

“While the ‘Environmental, Social and Governance’ or ‘ESG’ movement might be politically popular in California or in New York, financial institutions need to understand their practices are hurting people across West Virginia,” Moore said. “I simply cannot stand by and allow financial institutions working against West Virginia’s critical industries to profit off the very funds their policies attempt to diminish.”

The move comes after West Virginia’s legislature passed a bill authorizing the state’s treasurer to produce a list of firms that refuse to do business with fossil fuel companies and to deny those firms from consideration for state financial contracts. The bill became law and went into effect last month, empowering Moore to act.

“It’s real simple,” state Sen. Rupert Phillips, the bill’s chief sponsor, told the Washington Examiner earlier this year. “Why should we take our tax dollars that our coal miners and our gas industry have produced and invest it into a bank that is trying to shut them down?”

Moore’s office said it determined which firms it would place on the list by evaluating publicly available statements from them. The firms can be removed from the list “if the institution demonstrates that it has ceased all activity that boycotts energy companies.”

The move is drastic but is part of a broader pushback from red states against certain financial firms over environmental, social, and governance policies.

Kudos to WV and Riley Moore for doing the right thing.

Editor’s Note: ESG amounts to the evil rites of the globalist ruling oligarchy, led by the likes of Klaus Schwab, Bill Gates and Justin Trudeau who literally hope to steal everything and makes slaves of us all. They want every ordinary man and woman completely under under their thumb as members of a captive citizenry with no rights. They want to force-march us into the world they’re creating for us under a banner proclaiming  “You’ll own nothing and be happy.” The Dirty Five are despicable players in this horrid game and deserve to not only be shunned by West Virginia and Texas, but by everyone of good will.