What If Fracking Were Banned, As Some Irresponsibly Propose?

Fracking has delivered almost unimaginable benefits to our economy, our energy security and our environment, yet some would irresponsibly ban it. Nuts!

In 2016, the Global Energy Institute released their Energy Accountability Series, a series of reports asking the question, “What if hydraulic fracturing was banned?” Sponsored by the U.S. Chamber of Commerce, these reports discuss the impacts a ban on hydraulic fracturing, or “fracking,” on the nation’s economy, energy security, and state level impacts. After examining what fracking currently delivers to the nation, the study was able to project where the nation might be without it.

For starters, the report declared that with an implemented ban on fracking, more than 14 million jobs would be lost by 2022. Gas prices would almost double due to decreased production in natural gas and so would electricity prices. In result, the cost of living would increase by nearly $4,000 per year while household incomes would decrease.

A ban on fracking would reverse the economic progress that the United States has made from the shale revolution. A recent economic impact study released by the Ohio Oil and Gas Energy Education Program (OOGEEP) and Shale Crescent USA showed that in the past decade, end-users in the U.S. have saved over $1 trillion because of increased natural gas production. This was largely thanks to the Shale Crescent region of Ohio, Pennsylvania, and West Virginia, which has helped make the nation the leading natural gas producer in the world. A ban on fracking would be particularly harmful for this region which relies heavily on natural gas for manufacturing jobs. According to the Energy Accountability Series Report, a ban on fracking would cost the three states more than 863,000 jobs. 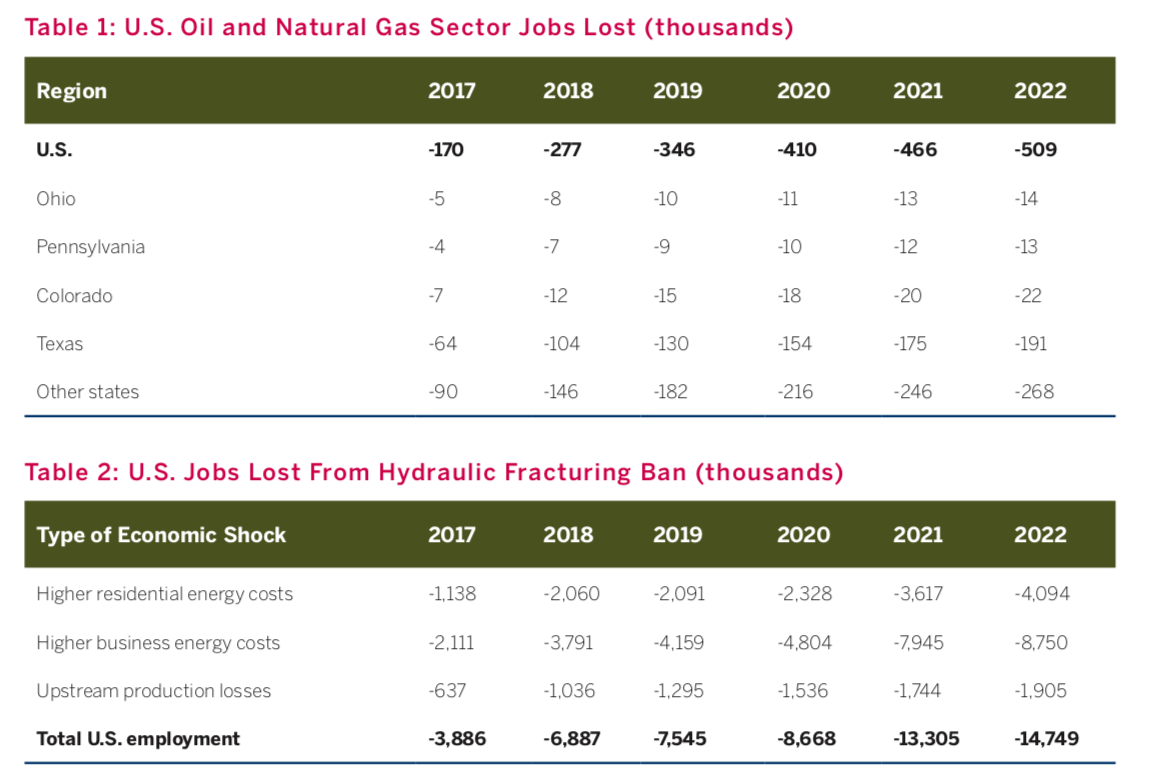 Fortunately, active efforts are being taken within Pennsylvania and the region to help eliminate the stigma of natural gas by emphasizing its importance in our economy. Pennsylvania Senator John Yudichak, who serves Luzerne and Carbon Counties, expressed his concern of a hasty ban on fracking. “I propose a refocus on what’s achievable, affordable and progressive” he stated in an article. “Recognizing the value of clean, low-cost and reliable natural gas will help pave the way for a clean, low-carbon future in the years ahead.”

Similarly, U.S. Senator Pat Toomey, who represents Pennsylvania, introduced his plans for Senate Resolution 411, which would prevent any future president from having unilateral authority to ban natural gas fracking. As a strong advocate for the manufacturing industry, he stated in a November press conference, “All we are asking is that the government not get in the way of this industry.”

Toomey believes that the state should have regulatory authority over their fracking laws, and he hopes to make that happen with his proposed resolution. “I think it’s essential that we begin to push back on some of these ideas that are threatening the prosperity and really the security of Pennsylvanians and Americans.”