Whitmer Out to Destroy Michigan, Canada and Air Travel

Michigan Gov. Gretchen Whitmer is giving Andrew Cuomo a run in the contest for America’s worst governor, killing her state, her neighbor Canada and an airport.

It’s hard to believe just how bad a governor Gretchen Whitmer is. She’s accomplished nearly as much destruction through incompetence as Andrew Cuomo has through corruption and Gavin Newsom has through aristocratic arrogance. How any trade union could possibly support these three Democrats, or Joe Xiden at this point is beyond imagination. Democrats are the party of elites at this point, and Whitmer combines moral narcissism with incompetence in unparalleled ways. She is, it seems at least, determined to destroy jobs, energy security, relations with Canada, her own state economy, air transportation and the environment in one fell swoop of petulant anger. 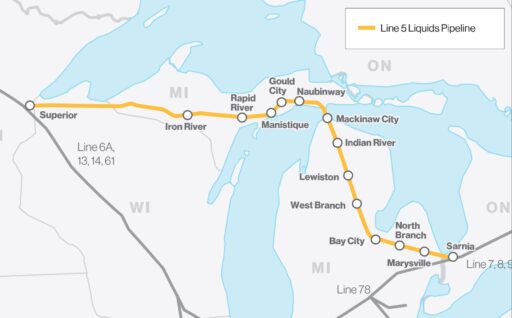 The Whitmer story of interference with the Enbridge Line 5 pipeline project is just amazing and the background may be gleaned from this post. Whitmer is, like equally duplicitous Andrew Cuorruptocrat, absolutely determined to burnish her green credential with elites regardless of any consequences whatsoever. She’s chosen a team for whom to root—the Green Eyed Blue Bloods—and nothing is going to change that. She’ll gladly be thrown out of office with “Save the Planet” on her lips, supposing that’s just the ticket to greater office down the road.

What Whitmer is doing, of course, is standing athwart the waves revoking and ending a 1953 easement that allows Enbridge Energy to run a dual pipeline through the Straits of Mackinac and connect with Canadian pipelines. The gentry class gods have decreed this cannot happen, so Whitmer is bowing before them and our friend Dan Markind notes the consequences in his latest Forbes piece:

Should Line 5 cease operations, even temporarily, the effects on both American and Canadian aviation specifically would be enormous. In turn, the secondary socio-economic impacts for both countries would be significant, but potentially devastating for Canada. Its aviation industry has arguably suffered much more than in the United States from the long siege of the COVID pandemic.

Toronto’s Lester Pearson International Airport, Canada’s largest airport serving Canada’s biggest, wealthiest, and arguably most important city, receives 100% of its jet fuel from Line 5. Potentially initially, but possibly also for some considerable period of time, it might have to cease operating entirely – or at least substantially curtain them – if Line 5 were to suddenly close.

Detroit Metropolitan Wayne County International Airport obtains 50% of its jet fuel from Line 5. Detroit’s economy, already on a long downward trend over many decades, would struggle to fully recover. Line 5 also feeds into Enbridge’s Line 9, which provides feedstock to refineries in Quebec. Those refineries, in turn, produce jet fuel for airports in Montreal and Quebec City, who also might see their services curtailed. While perhaps not suffering impacts as harsh as in Toronto and Detroit, the impacts of a Line 5 shut down on aviation in those cities would still be significant for their regions, and for Canada as a whole…

The disruption would not be limited to the large hub airports and also to aviation. According to the Detroit Free Press, “Detroit and Ohio refineries served by Line 5 send about 23,000 barrels of jet fuel daily to Ontario by rail, according to a 2017 report from the U.S. Energy Information Administration — some of which could arguably get diverted to Detroit Metropolitan Airport if a Line 5 shutdown creates the jet fuel pinch some expect.” Still, that would not be nearly enough to cover the combined needs of Detroit Metropolitan Airport and other airports in Michigan…

It is estimated that to make up for the loss of the pipeline, Ontario would need to add a massive 2,000 trucks or 500 rail cars going one-way each day. The bulk of those would not be used for jet fuel. Putting aside the potential secondary impacts of having that many vehicles transporting highly flammable fuel over long distances on a daily basis, including but certainly not limited to the excess greenhouse emissions, without that fuel at its largest hub, Canadian aviation, already battered by the coronavirus and lacking the federal assistance provided In the United States, would suffer yet another massive hit.

Whitmer is an embarrassment, a Kathleen Kane look-a-like and act-a-like, as well as Cuorruptocrat, Newsom and just about every other blue state Democrat governor. But, she’s now competing for top honors with the worst of them. She’s completely sold out blue collar constituents for blue blood admirers and funders.