Why Does Joe Biden Want to Kill Our Oil and Gas?

…
[Editor’s Note: Joe Biden is on the war path against oil and gas, a foundation of America’s success. Why? Does he have any idea what he’s doing? Or, has he sold out, or worse?]

The oil and gas industry impacted 5.6 percent of U.S. jobs, 7.9 percent of GDP and 6.8 percent of labor income in 2019. Yet, Joe Biden wants to destroy the industry, canceling the Keystone XL pipeline, closing drilling in the Arctic National Wildlife Refuge, and placing a moratorium on oil and gas drilling on federal lands. He admitted it during the last presidential debate.

The American Petroleum Institute study, entitled Impacts of the Oil and Natural Gas Industry on the US Economy in 2019 and produced by PricewaterhouseCoopers LLP using government data, quantifies the economic impacts of the U.S. oil and natural gas industry in terms of employment, labor income, and value-added at the national, state, and Congressional District level.

At the national level, each direct job in the oil and natural gas industry supported an additional 3.5 jobs elsewhere in the U.S. economy in 2019. Counting direct, indirect, and induced impacts, the industry’s total impact on labor income (including proprietors’ income) was $892.7 billion, or 6.8 percent of the U.S. national labor income in 2019. The industry’s total impact on U.S. GDP was nearly $1.7 trillion, accounting for 7.9 percent of the national total in 2019.

In 31 U.S. states the oil and gas industry, directly and indirectly, supported at least 100,000 jobs in each during 2019. Texas alone had 2.5 million jobs supported by the industry, and California had over 1 million jobs attributable to the industry. The share of employment supported by the oil and natural gas industry (including direct, indirect and induced impacts) in each state ranges from 2.6 percent in the District of Columbia to 16.7 percent in Oklahoma. 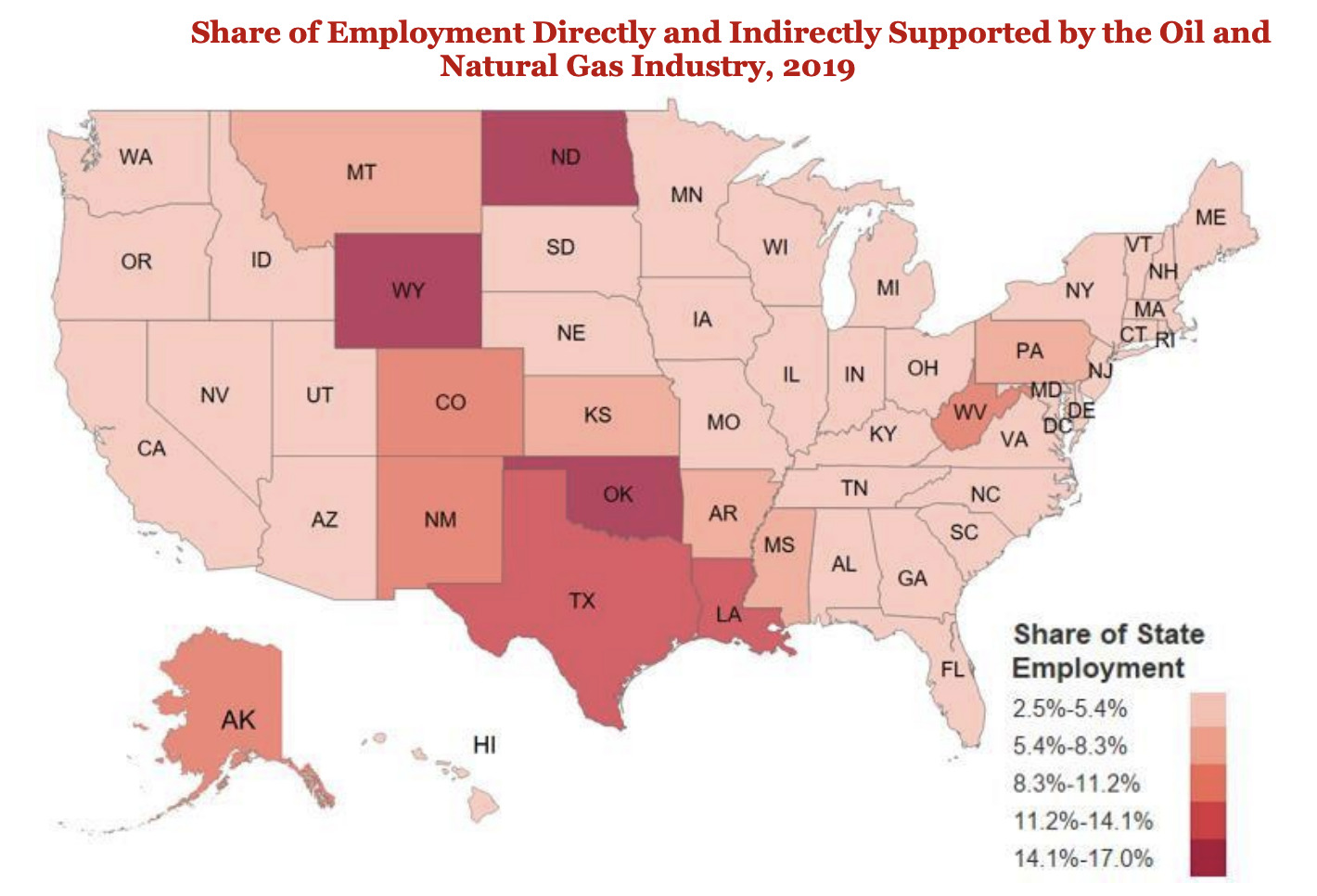 Over the last decade, U.S. natural gas production increased by about 60 percent and oil production doubled. Despite the push by the federal government and a growing number of states to transition to electric vehicles and renewable energy sources, demand for oil is expected to continue to increase through 2050, according to the Energy Information Administration in its Annual Energy Outlook 2021.

This is because it represents over 90 percent of the U.S. transportation sector and is used in over 6000 products essential for modern life. All of our food, and virtually every good Americans depend upon for living are transported to them by the use of oil.

In 2019, Wyoming had the second-highest share of residents whose employment was impacted by the oil and gas sector (16.6 percent), behind Oklahoma (16.7 percent)—and the highest proportion of labor income from the industry. About 26 percent of Wyoming’s 2019 GDP was contributed to directly or indirectly, or induced, by the oil and gas industry—the fourth-highest percentage after Alaska, Louisiana and Oklahoma.

Wyoming’s tax structure is structured around resource extraction, of which the oil and gas industry contributes over half—$1.67 billion of a total general fund of $3 billion. Because Wyoming’s oil and gas extraction is mainly on federal lands, the Biden executive order restricting leases for new drilling has had a disproportionate effect on Wyoming and their funding of schools and roads.

The oil and natural gas industry is essential to the post-pandemic recovery, not just in creating good-paying jobs and economic growth, but also in providing for low-cost energy for the American public. Oil is the world’s most important fuel, supplying 35 percent of primary energy and over 95 percent of transportation needs. Oil has no significant substitute, and it will not for a long time. Wind and solar power cannot displace oil because these sources compete only in the electricity sector, where oil effectively plays no role.

Biden’s energy transition makes no sense as there are no substitutes for what oil and gas provide in the U.S. economy, and the economic destruction from stopping their use will be enormous and is likely to prove very unpopular with citizens.

Editor’s Note: Why is Joe Biden acting so stupidly as IER demonstrates? Well, as I see it, Biden has always been a hustler with no real thought behind anything he’s done other than self-promotion. That’s why he has always plagiarized speeches, told tall tales, switched his opinions whenever necessary, demagogued at every opportunity and gleefully engaged in the personal destruction of others. Assigning him any other values or principles misses the point; he has none. His position on oil and gas is simply to accept what he’s been told by those he views as necessary to his political survival.

The best case interpretation is that Biden has been captured by the extreme left, has no clue or both. But, his recent actions on a number of fronts suggest something even worse; that he is been effectively blackmailed by China as a result of the deals his son made with that communist government and which may well have put money in his own pocket. This is what we are dealing with here. These opinions, though, are strictly mine, personally, and not iER’s, so take them for what they are worth.