Wind Reliance Will Leave New York…Well…Blowin’ in the Wind

Wind Reliance Will Leave New York…Well…Blowin’ in the Wind

[Editor’s Note: New York’s Climate Action Council is placing ia large bet on wind resources that are sure to disappoint and leave New Yorkers blowin’ in the wind as far as energy security is concerned.]

The Climate Leadership and Community Protection Act (Climate Act) has a legal mandate for New York State greenhouse gas emissions to meet the ambitious net-zero goal by 2050. One of the targets is a zero-emissions electricity grid by 2040.  In order to meet that target the plan is to expand wind and solar generating resources.  This post looks at the 2021 wind resource availability relative to Climate Act expected wind resource builds.

Everyone wants to do right by the environment to the extent that they can afford to and not be unduly burdened by the effects of environmental policies. I have written extensively on implementation of New York’s response to climate change risk because I believe the ambitions for a zero-emissions economy embodied in the Climate Act outstrip available renewable technology such that it will adversely affect reliability, impact affordability, risk safety, affect lifestyles, and will have worse impacts on the environment than the purported effects of climate change in New York.

New York’s Greenhouse Gas (GHG) emissions are less than one half one percent of global emissions and since 1990 global GHG emissions have increased by more than one half a percent per year. Moreover, the reductions cannot measurably affect global warming when implemented.  The opinions expressed in this post do not reflect the position of any of my previous employers or any other company I have been associated with, these comments are mine alone.

The Climate Act establishes a “Net Zero” target by 2050. The Climate Action Council is responsible for preparing the Scoping Plan that will “achieve the State’s bold clean energy and climate agenda”. They were assisted by Advisory Panels who developed and presented strategies to the meet the goals to the Council. Those strategies were used to develop the integration analysis prepared by the New York State Energy Research and Development Authority (NYSERDA) and its consultants that quantified the impact of the strategies. That analysis was used to develop the Draft Scoping Plan that was released for public comment on December 30, 2021. 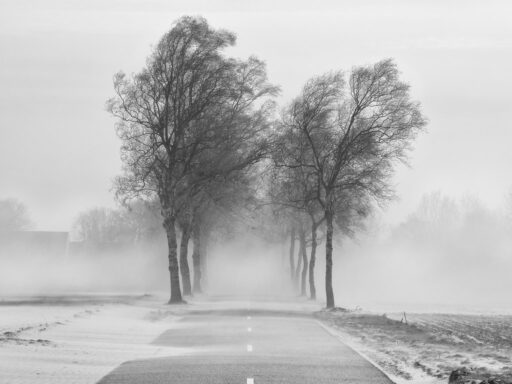 Where New Yorkers will be left if the Climate Action Council gets its way; blowin’in a very cold wind

The Integration Analysis has three mitigation scenarios.  The Mitigation Scenarios Summary Fuel Mix table projects that 9,445 MW of on-shore wind capacity will need to be developed in the Scenario 2, “Strategic Use of Low-Carbon Fuels”; 10,154 MW in Scenario 3, “Accelerated Transition Away from Combustion”; and 11,052 MW in Scenario 4, “Beyond 85% Reductions”.

At this time the New York Independent System Operator (NYISO) is preparing its capacity expansion projections.  I previously described that effort and noted that the analysis includes 27 sensitivity cases in addition to the preliminary baseline.   With the caveat that those projections are the first draft and could change significantly, it is important to note that the preliminary baseline projection for land-based wind is 22,789 MW and that the sensitivity cases range from 16,702 MW to 31,678 MW.  Clearly, at some point the differences between the Integration Analysis and the NYISO projections have to be resolved given that the NYISO is projecting on the order of double the Integration Analysis.

The NYISO Gold Book summarizes New York load & capacity data.  It includes a table that lists pertinent information for every generating unit in New York.  I have been extracting wind facility information so that I could calculate capacity factors for many years as shown in this table.   In 2021 two new facilities came on line.  At the start of the year the nameplate capacity of all the wind facilities was 1,985 MW and it increased to 2,191 MW after the new facilities came on line.  However, the capacity factor, the actual generation produced relative to the maximum possible generation was only 22.3%. 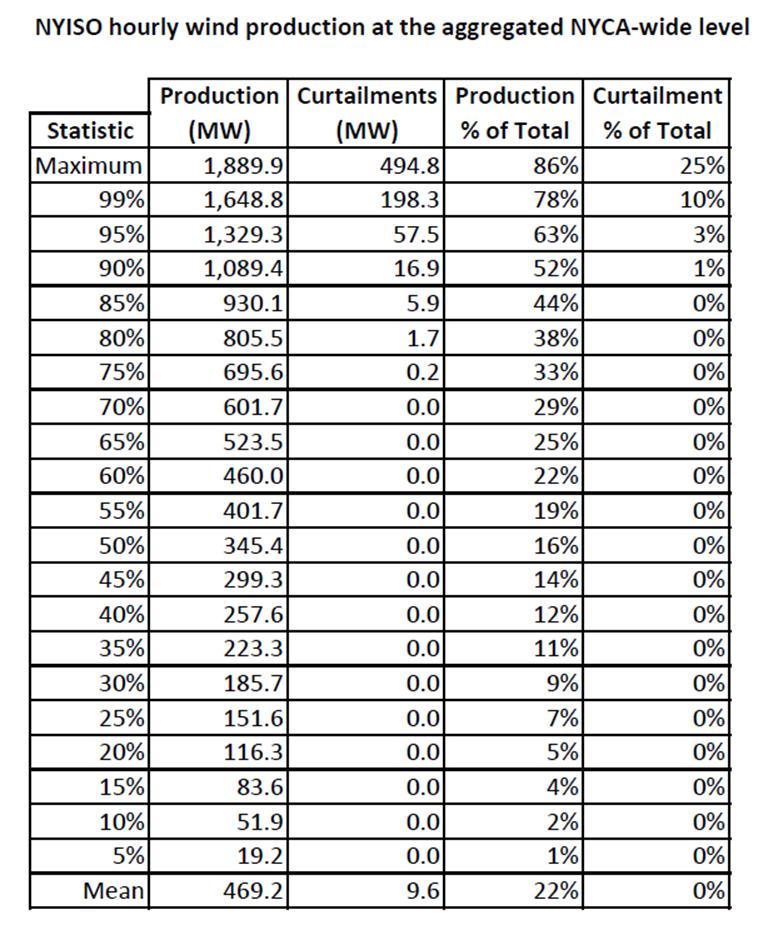 With respect to production, I believe that these data show that the New York wind resource is not particularly good.  The percentiles are shown in the first column and the data indicate that wind power is greater than 78% of the total capacity only 87 hours (99th percentile) in 2021.  Three quarters of the time the production is less than 696 MW equivalent to one third of the total capacity.  If you assume that production less than 10% is the threshold for no value then wind won’t be producing appreciable power 30% of the time.

These results have an important ramification for resource planning.  The existing wind facilities are spread across the state.  NYISO cannot provide individual unit generation so I cannot definitively say that those facilities are highly correlated.  However, given that half the time the total generation capacity is only 16% of the total I am sure that is the case.  As a result, that improving energy production at the lower levels requires a lot more generation capacity.  For example, at the 25th percentile the total capacity is 151.6 MW.  If planners predict we need wind generation capacity to equal 1,000 MW 75% of the time. then, based on 2021 data, the state land-based wind capacity would have to increase to 13,900 MW, over six times greater than current capacity

The key point of this article is that there are limitations to New York’s wind resource capability.  Dietmar Detering and I have corresponded about the Integration Analysis wind resource projections.  He has found that “The Integration Analysis predicts between 10,997 MW and 13,239 MW of land-based wind installed within New York by 2050, and estimates annual generation between 31,224 GWh and 37,896 GWh which corresponds to a capacity factor of about 33%.  My capacity factor table shows that the maximum state-wide capacity was 28% in 2014 and was only 22.3% in 2021.  The Climate Action Council needs to reconcile those differences.

There are a few possible explanations.  New York’s decreasing capacity factors could reflect the age of the fleet.  The Integration Analysis could reflect larger wind turbines that have higher capacity factors because they can reach higher wind speed layers.  In either case that suggests that all the New York existing land-based wind facilities need to be replaced.

There is insufficient documentation available in the Draft Scoping Plan to confirm whether the Plan assumes complete replacement.  As far as I can tell the Integration Analysis assumes “indefinite” expected lifetimes for energy storage, wind and solar infrastructure and assigns lifetimes to other resources despite the fact that renewable resource lifetimes are half that of other resources.  Given that creative bookkeeping I doubt that existing resource replacements are included in the total costs of the mitigation scenarios.

The Climate Act 2040 zero-emissions target will require much greater reliance on wind and solar generating resources.  Unfortunately, the authors of the Climate Act did not recognize limitations for those resources.  These results show that land-based wind in New York is not a particularly good resource.  Winter time solar is poor because of New York’s high latitude with short days in the winter and excess cloudiness downwind of the Great Lakes.   Overall, New York’s has a poor wind and solar resource capability.

It is imperative that the State conduct a detailed evaluation of renewable energy resource availability to determine the generation and energy storage requirements of the future New York electrical system.

As these results show, the annual wind resources capabilities are low. I submitted comments in March that explain that in order to ensure electric system reliability for an energy system that depends on renewable generators and energy storage, the resources available during periods of low wind and solar energy production must be known.  To date, many studies do not consider the importance of worst-case conditions on reliability planning and I believe that the Draft Scoping Plan also fails to address this issue.  The comments explained that there is a viable approach that could robustly quantify the worst-case renewable energy resources and provide the information necessary for adequate planning.