[Editor’s Note: Tom Wolf is a corrupt trust-funder betraying trade union allies and all Pennsylvanians on RGGI for the sake of enhancing his reputation with his pre-school peers.]

We’re not sure why this story is not the top story on all of the state and national news networks. Using the threat of withholding public money, Pennsylvania Gov. Tom Wolf outright extorted Democrat members of the PA legislature to support his odious carbon tax plan, otherwise known as the Regional Greenhouse Gas Initiative (RGGI). Before a key vote last month in the PA Legislature, Wolf offered a quid pro quo: Democrat legislators either support RGGI or Wolf will withhold approval for state funding for local projects in their districts. Why are there no investigations and demands for jail time? 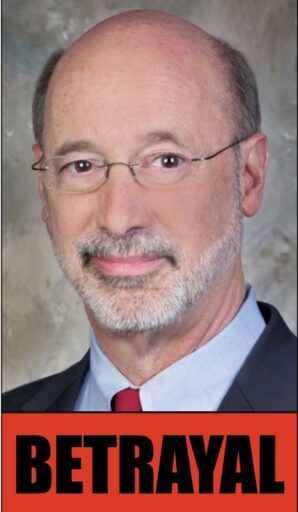 We’ll tell you why. Because Wolf is a Democrat and the Democrat media protects its own. Just look at Jeffrey Epstein, a major Democrat donor (and close friend of Bill Clinton) who got away with child rape for decades. But we digress.

We are outraged at this news. If a few more Democrats–two in the Senate and six in the House–had voted against RGGI, there would have been enough votes to override a promised veto from Wolf. He stopped the defections against his plan by threatening them, plain and simple. It’s the textbook definition of extortion. Read the whole sordid story from the Capital-Star (emphasis added):

Gov. Tom Wolf has often said he’s “not a politician.” But before a vote on a key climate policy last month, his administration reached for a classic piece of Harrisburg leverage — state funding for local projects — to get Democratic lawmakers in line.

On the record, no Democratic lawmakers would acknowledge the tactic. But privately, lawmakers and lobbyists noted that the Democratic Wolf administration implied that gubernatorial sign-off for millions in state aid to lawmakers’ districts was contingent on backing the Regional Greenhouse Gas Initiative, or RGGI.

The threat of withholding state funding is a bit of political hardball that Capitol observers say they haven’t seen from the 72-year-old, second-term governor since he took office in 2015.

“This is the first time I’ve seen Wolf be aggressive, period,” one veteran Harrisburg lobbyist told the Capital-Star.

Two sources added that Wolf has been making personal calls to Democratic lawmakers to ask that they back the initiative, which Wolf spokesperson Elizabeth Rementer acknowledged in an email to the Capital-Star.

However, state grant money did not come up in those conversations, she said.

Regardless of the exact tactics, the lobbying efforts appeared to pay dividends. While the Republican-controlled General Assembly did pass a resolution to block the initiative, the vote totals were shy of the two-thirds majority needed to override Wolf’s veto.

The resolution blocking RGGI passed the Senate in late October 32-18, two votes shy of a two thirds majority, and the House 130-70 in December, six votes shy of veto override benchmark.

The multi-state program requires states to charge power plant operators for every ton of carbon they release into the air. Wolf announced Pennsylvania would enter it in 2019, and the state’s lengthy regulatory review process to complete the rule is nearly complete.

Supporters argue that putting a price on carbon will reduce emissions from Pennsylvania’s electricity industry, while funding new environmental programs and communities’ transition away from fossil fuels.

But opponents argue its environmental impacts are slim, and say that the initiative could increase utility prices, while shutting down coal-fired power plants.

That last point is the most critical for Wolf and Democrats. That’s because labor unions — such as the powerful building trades — whose workers build, repair, and operate the plants, also oppose the initiative.

Organized labor’s opposition has made some Democrats waver on the vote, even if addressing climate change is a top priority for many in the party. Dozens of Democratic lawmakers have voted against the initiative when it has come up for a floor vote in the past two years.

In the old days, Capitol sources note, such disloyalty could be checked with a number of carrots and sticks, from pork-barrel spending slipped into the budget by legislative leaders to cutting lawmakers’ staff and other perks.

Reforms to the General Assembly since the 2005 pay raise scandal have limited these tools. But they haven’t disappeared.

One of the biggest pieces of leverage left is funding known as the Redevelopment Assistance Capital Program, or RCAPs.

Every so often, the Legislature passes a law that lays out a list of projects that lawmakers hope will receive state funding — from business expansions to park revitalization.

Insiders describe it as a wishlist. For example, the General Assembly authorized spending as much as $2.5 billion this year on 775 individual projects in 60 of the state’s 67 counties.

But projects are only finally approved at the governors’ discretion, giving the chief executive a key role in whipping votes, insiders note.

The money is released for authorized projects in large batches, typically sparking a flurry of press releases from lawmakers whose pet projects benefit.

“There’s no formal review time period/approval time period for projects,” Rementer told the Capital-Star in an email. “Projects are reviewed and announced throughout the year based on funding round schedules and following a mandatory public comment period.”

Of the requested funding this year, just about one-in-three projects were given $420 million in funding, some receiving much less than requested, insiders note.

Because the governor has a final say on which projects are authorized for state funding, the money can be used to keep lawmakers in line on tough votes, such as RGGI.

Take Rep. Manny Guzman, D-Berks. The first-term lawmaker’s votes have waffled on RGGI over the past year.

As a member of the House Environmental Energy and Resources Committee, he’s had to vote on the initiative four times — once on legislation preempting it, once on a letter opposing it, and twice on resolutions disputing it.

Guzman said his votes reflected specific concerns about how the initiative might impact his working-class Latino district in Reading.

“As legislators, we’re expected to be experts on everything,” Guzman told the Capital-Star. “And so I think my votes were just a signal flag, me signal flagging to the governor, letting him know that I had some particular issues with RGGI.”

Guzman said he was worried the initiative could cost union jobs and increase utility prices on low-income ratepayers, such as his constituents in Reading.

Still, Guzman’s votes were surprising to some of his veteran Democratic colleagues, because of the key role the governor plays in distributing the capital grants.

And Capitol observers noted that, after Guzman voted with Wolf in committee and on the floor on the final resolution, his district ended up receiving almost $10 million in capital grants, including $7.5 million in state dollars for a long-sought renovation to Reading’s minor league baseball stadium.

“Guzman was instrumental in securing the funding to keep the Reading Phillies in Baseball Town through collaborative measures with influential leaders that put the project in motion,” Guzman’s office said in a press release announcing the funding.

Guzman downplayed his own role in the grants to the Capital-Star, noting that his fellow Reading legislators also helped secure the money, and added that the fate of those dollars did not come up as he discussed the program with the administration.

In the future, Guzman added, he’ll “keep my very close eye” on how the revenues from the carbon credits are spent. In particular, he hoped it would benefit Reading and other communities across the commonwealth…

And at least one House Republican was willing to bring the accusation of horse-trading to the House floor.

Speaking against the initiative during floor debate in December, state Rep. Josh Kail, R-Beaver, who heads the House Republicans’ campaign arm, and has had a financial interest in at least three natural gas-related companies, accused Democrats of selling out.

“Will you stand with His Excellency, a governor who has one year left in his term,” Kail said, “a governor who understands how bad his policy is and is forcing Democrats to vote against union jobs with RCAP grants.”

He was then cut off by House Speaker Bryan Cutler, R-Lancaster, who warned him not to question the motives of his colleagues.

We remain incensed with Wolf’s RGGI plan as it will add billions of dollars in new taxes to Marcellus gas-fired power plants–essentially putting them out of business. We MUST find a way to defeat RGGI in PA. It’s time for PA Republicans to call for an investigation of Wolf’s extortion.

Editor’s Note: RGGI is Tom Wolf’s pet cause, more than any other, because, as a preppie with no interior compass other than maintaining what he perceives as his status among other supposed elites. He has betrayed trade union allies just like betrayed DRBC residents for the sake of burnishing club credentials. And, once again, we see how corrupted everything touched by this ruling gentry class really is. We also see just pathetic the Republican opposition truly is, with the the leader of Republican House admonishing on his representatives for speaking the truth about Tom Wolf and RGGI. Disgusting!