Wolf Called Out on “Blatant Disregard for the Legislature”

Tom Wolf, Pennsylvania’s arrogant but hapless trust-funder Governor is shunting aside the state legislature in his quest to impose RGGI.

Our friend Kevin Mooney, a top-notch investigative reporter for The Daily Signal, is out with another excellent piece exposing the petulant policies of our trust-funder governor, Tom Wolf. Frustrated by his inability to gain full support from even his fellow Democrats, let alone Republicans, for his bone-headed RGGI virtue signaling, he is now simply giving the  legislature the Heisman and attempt to impose a Commonwealth carbon tax by edict. Yes, his head is cocked back father than ever, his nose is in the air higher than ever and is disdain for the opinions of other elected officials is on full display.

Here are a few excerpts from Kevin’s article to illustrate:

Other elected officials in Pennsylvania continue to question the constitutionality of Gov. Tom Wolf’s proposed carbon tax in the run-up to 10 public hearings that begin Tuesday on the disputed regulations to address climate change.

The Pennsylvania Environmental Quality Board has approved a “cap and trade” plan to cap carbon dioxide emissions from power plants.

The plan, which the board OK’d in mid-September, would require power plants to obtain carbon dioxide allowances equal to the amount of the greenhouse gas they emit. Electric utilities that emit more than their assigned cap would have to purchase allowances at an auction to offset the excess.

Elected officials in both parties, however, say that Wolf is circumventing the Pennsylvania General Assembly in an effort to impose taxes that only the state lawmakers can approve or reject…

[S]even of Wolf’s fellow Democrats co-sponsored a House bill requiring the governor to submit his carbon tax plan to the General Assembly. The House vote to pass the bill was six votes shy of a veto-proof majority…

The Regional Greenhouse Gas Initiative, widely known as RGGI, includes 10 New England and Mid-Atlantic states where government agents compel electric utilities to purchase carbon allowances at quarterly auctions whenever the utilities surpass the cap on emissions established by the agreement.

The cost of carbon dioxide allowances increased by 18.6% in the most recent auction, according to RGGI. Allowances sold for $6.82 per metric ton in the third quarter of this year, $1.07 higher than the prior quarter.

The auction raised $110.4 million, an amount that will be added to consumer electricity bills in the 10 participating states, which include Connecticut, Delaware, Maine, Maryland, Massachusetts, New Hampshire, New York, Rhode Island, Vermont, and, in 2021, Virginia.

“There are two thoughts I like to highlight when I speak to people about this topic,” state Rep. Jonathan Fritz, a Republican from Honesdale who represents the 111th District, told The Daily Signal. “First, RGGI is a tax and it is a cap-and-trade [system], and as a result RGGI increases costs for energy and those costs get passed on to the consumer.” 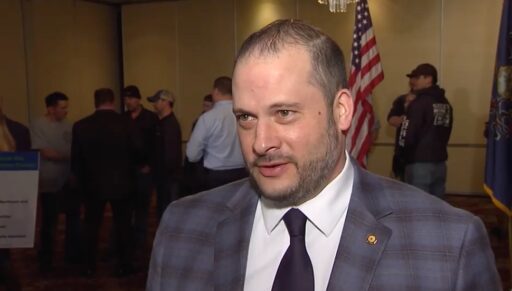 “And, secondly,” Fritz said, “out of all the states in RGGI, Pennsylvania would be the only one that becomes a member through unilateral action by a governor, and that blatant disregard for the Legislature is profoundly frustrating.”

…[A] memo from [Rep. James] Struzzi, [a Republican,] and Rep. Pam Snyder, a Democrat representing the 50th District in Carmichaels, reiterates the position of elected officials in both parties that Wolf “does not have the unilateral authority” to impose a carbon tax.

That action, they write, qualifies as a “major energy fiscal policy decision” that falls within the purview of the legislative branch. Their memo is attached to the House resolution opposing Pennsylvania’s participation in the greenhouse gas initiative.

“With the difficult times we are living in with COVID-19, and now with the holidays, it’s very telling that the governor is continuing to move forward his regulatory plans,” Struzzi told The Daily Signal…

Since Pennsylvania already is a net exporter of electricity and a top producer of natural gas, which helped the commonwealth to lower carbon emissions, Fritz said, he views RGGI as an “expensive regulatory burden” that runs counter to the state’s interests.

Pennsylvania’s carbon emissions have dropped by more than 30% since 2009, the year RGGI was established, according to news reports.

“I feel as though the governor is taking this action because he hasn’t been able to get his severance tax and in order to pacify his overzealous environmental supporters, this was his next best option,” Fritz said…

“We will use any mechanism possible to place roadblocks against the governor’s unilateral actions on RGGI,”  Fritz said. “If that doesn’t create the results we need for Pennsylvanians, then this is going to the courts.”

…The Wolf administration’s own estimates reportedly show that the tax from selling allowances would generate $2.36 billion over the next decade, which energy consumers would pay through their electricity bills.

This is Tom Wolf. He’s a fellow who, having been raised in wealth, is very accustomed to getting what he wants and giving orders. What he wants more than anything is the praise of his gentry class peers and RGGI is a part of that. It’s all virtue signaling from top to bottom; an environmental policy that makes absolutely zero sense for Pennsylvania as an energy exporter, but will raise his profile among other elitist snobs with dreams of tyranny.