…
[Editor’s Note: Europe’s focus on biomass in the form of wood pellets to produce electricity is a step backward on CO2 and shows green energy is anything but.]

When most Americans think about “green power” and Europe, they conjure up pictures of wind turbines and solar panels producing emission-free power. The truth, however, is that Europe makes more energy from wood than it does wind and solar. Policymakers around the world, including the United States, have declared that burning wood to generate electricity is not a climate threat, but a “green” power solution. In Europe, “biomass power,” is counted and subsidized as zero-emissions renewable energy. As a result, European utilities import millions of metric tons of wood from U.S. forests every year, and Europe’s utilities generate more energy from burning wood than from wind and solar combined. Biomass power is a $50 billion global industry, and growing.

The idea that generating electricity from wood could be carbon-neutral is bewildering because biomass emits more carbon dioxide than coal at the smokestack, plus there is additional carbon dioxide released by logging, processing logs into small pellets, and transporting them overseas. The argument, accepted by the world’s politicians, is that the carbon released while trees are burning should not count because it is eventually offset by the carbon absorbed while other trees are growing, making the power from it carbon neutral.

Deforestation is a major climate issue. Climate scientists would prefer the trees to grow and absorb carbon dioxide, indicating that converting wood into power is a forest destroyer and an inefficient way to generate energy. For example, solar panels can produce 100 times as much power per acre than biomass. And, supplying 2 percent more global energy from biomass would require doubling total global wood harvests.

Europe Is the Largest Consumer and Producer of Wood Pellets

The southeastern United States produces one-sixth of the world’s timber from its highly productive forests; about 4 percent are turned into pellets. The U.S. wood-pellet industry has built 23 mills throughout the southeast over the past decade, and is branding itself as a 21st-century “green” energy business. A facility in Northampton County, North Carolina, ships wood to the world’s largest biomass plant, in England. The United States exports over 4 times as many pellets as it consumes and its exports of wood pellets are growing. Wood pellets are consumed in highly efficient heating stoves in the United States, as well as in barbeque smokers and in the industrial and electric generating sectors.

The world’s leading pellet manufacturer, Enviva, built its first pellet mill in 2011, after Europe’s renewable energy mandate created lucrative incentives to burn wood. Enviva operates nine large mills around the Southeast that can debark and crush and process logs into more than 5 million tons of pellets a year, and there are three more mills in development. It also operates five ports to ship its pellets abroad, and has 1,100 employees, not including the loggers and truckers who supply its wood.

Enviva tries to be an environmental steward, requiring the landowners who supply its wood to replant their forests, and using GPS technology to track each harvest to see if the landowners are in compliance. Reforestation in the Southeast is very common and is considered an agricultural activity. The company has also committed to help protect 35,000 acres of threatened bottomland hardwood forests and restore 5,000 acres of natural longleaf pine. U.S. tree cover increased about 2 percent from 2007 to 2017. 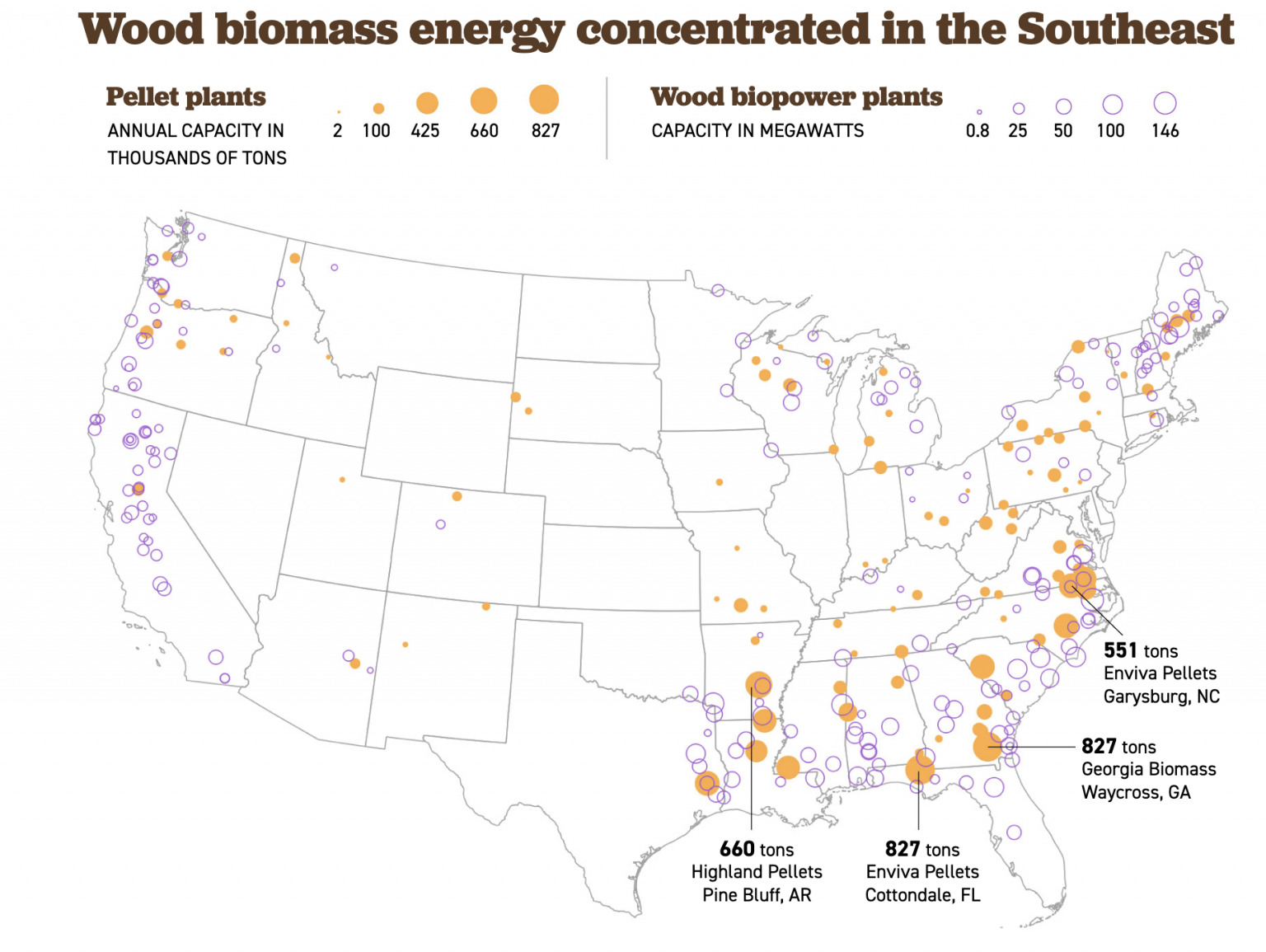 Editor’s Note: This fact-based and relatively neutral article demonstrates the absurdity of supposedly green energy. The argument that making, transporting and burning is somehow CO2 neutral is factitious at best. If burning wood pellets simply substitutes for decay in the forest, then why are new trees planted? And, aren’t the trees planted to be harvested? The fact is that burning of biomass generates tremendous CO2 and makes a mockery of the idea burning natural gas is somehow dangerous when the wood pellets, which require vast acreages to produce, must be manufactured and then shipped as far away as Europe using equipment running on fossil fuels.