U.S. crude oil prices tumbled over 20% on Monday after the United States Oil Fund (USO) announced it would sell all its futures contracts for June delivery over a four-day period.

The number of active oil rigs continue to decline in the U.S., with Baker Hughes reporting on Friday the rig count fell by 60 to a total of 378. The rig count is falling quickly towards the lows seen in 2016.

According to ING Economics, “since mid-March, the number of active oil rigs in the U.S. has fallen by around 45% — a clear signal that output is heading lower in the coming months.” 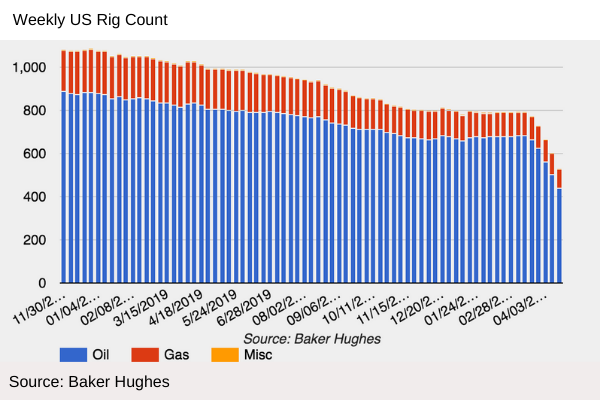 Yet, prices are failing to shift the downward pressure. In fact, futures prices continue to fall despite the some Opec+ countries’ decision to start early production cuts, ahead of May 1.

Bringing forward cuts by a handful of producers may be helpful to a certain extent, but will have little impact on the oil balance in the short term.