Yaw Speaks Up for Pennsylvanians; Calls Foul on New York

According to Senator Gene Yaw of Pennsylvania’s 23rd District, two things about energy needs are certain: Pennsylvania is producing abundant natural gas, and states to the north and east need it desperately. 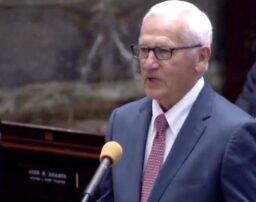 “We can’t get our gas to New England where it is really needed,” said Yaw, who accused the states of favoring the purchase of gas from Europe and Russia. “It just compounds our recovery problems because we can’t get the gas out of Pennsylvania.”

“It’s absolutely incredible to me that this issue has not gotten the attention that it should,” Gene Barr, president and CEO of the Pennsylvania Chamber of Business and Industry, remarked. “Russia and others are engaging in activities against Pennsylvania by spreading disinformation and funding groups trying to block natural gas production in this country.” Without Pennsylvania’s gas, Barr continued, the northeast states are utilizing energy sources with higher emissions and a bigger price tag.

Yaw and Barr were panel members of a recent Think About Energy discussion that I hosted on May 28. Also participating was Senator John Yudichak of the 14th District. The primary topic was how energy could be the catalyst for recovery from the pandemic and associated recession.

The panelists were in agreement that environmental groups are among those working against the natural gas industry without acknowledging that natural gas leaves a smaller footprint than other fossil fuels. Yaw suggested and Barr endorsed the idea of bringing lead environmentalists to the table for a discussion about the “real costs” associated with Pennsylvania’s full portfolio of energy sources, including coal, geothermal, solar, hydroelectric, wind and wood.

“There is misinformation around the false narrative that you are either for the environment or for jobs,” Yudichak added. “They are not mutually exclusive. You can have both.”

“We have a product that we can sell, and we need a market for it,” Yaw maintained.

In light of the northeast supply enhancement decision and the concern of misinformation, elected officials are focusing on new legislation that would attract large corporations here for the production of bio-diesel fuels and fertilizer for farmers and plastics that could be used for PPE’s for healthcare workers and first responders.