The last Think About Energy event was digital and focused on the petrochemical possibilities that now lie before us as Pennsylvanians thanks to natural gas.

In the six years that Think About Energy conferences have been conducted across the Commonwealth, April 7 marked the first time that participants communicated their thoughts on energy policy from the safety of their own homes and offices. The COVID-19 health crisis that has necessitated social distancing and prevented public gatherings was also cited by panel members as a catalyst for pursuing petrochemical (PC) production in Pennsylvania.

At a time when the nation is grappling with a shortage of personal protective equipment (PPE) for health care providers and first responders, participants agreed that such supplies would be readily available if they were made in Pennsylvania, where natural gas produces abundant feedstock in the forms of ethane, propane, and butane for the manufacture of plastics, fertilizers and biofuels.

With today’s 3D printers, Stark noted, we could rapidly ramp up production of parts like respirators and oxygen valves needed where impact is the greatest. But we need to build or retool the plants, he stressed, and communities need legislators on their side to provide corporations with the incentives to build in Pennsylvania rather than other regions of the United States or in foreign markets.

In the past, Stark related, “so much was pushed overseas due to cheap energy costs and cheap labor. But we can no longer single source to certain regions. We need to be thinking more broadly and invest onshore. It also doesn’t make sense to concentrate them all in one area like the Gulf Coast.”

Tom Gellrich of TopLine Analytics provided a historical and global view on overall outgrowth of petrochemicals, from the days of the OPEC oil embargos when he worked with Exxon to start an ethane cracker plant in the middle east. He watched a small Saudi Arabian village blossom into a city within a year of the start of production of the plant there. But times have changed. The United States is no longer dependent on OPEC for the majority of its petroleum, thus robbing the Middle East of its dominance in petrochemical production. 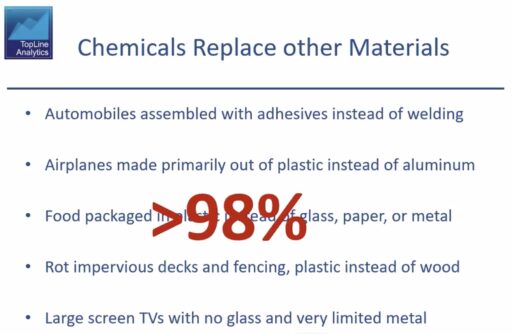 “The ocean has become a costly barrier,” said Gellrich, “because the gas has to be compressed. So the energy savings remain here for U.S. manufacturers.” Subsequently, he noted, 70 percent of investment in PC production here is by foreign companies. “They know that they have to be present in the US if they are going to participate in global markets.”

Initially, those investments were made in the Gulf Coast region, where a single hurricane can put a plant offline for months or years. Plus, feedstock supplies there are dwindling.

Greg Kozera, Director of Marketing & Sales for ShaleCrescent USA, is leading the charge about bringing production to the Marcellus region via daily conference calls with manufacturers across the nation.

“Everybody knew that the US was producing all this gas, but they didn’t know that 85 percent of it was coming from here,” he said in reference to Pennsylvania, Ohio and West Virginia. Additionally, more than 70 percent of the demand for the materials overlaps this same area. “Why send LNG to the Gulf Coast to have them produce pellets just to ship them back?” he continued. “We have the economic advantage in our backyard.”

“The manufacturing of these products should and could have their footprint in Pennsylvania,” Carl Marrara, Vice President of Government Affairs for the Pennsylvania Manufacturers Association (PMA) concurred. “It is more important now than it has ever been.” 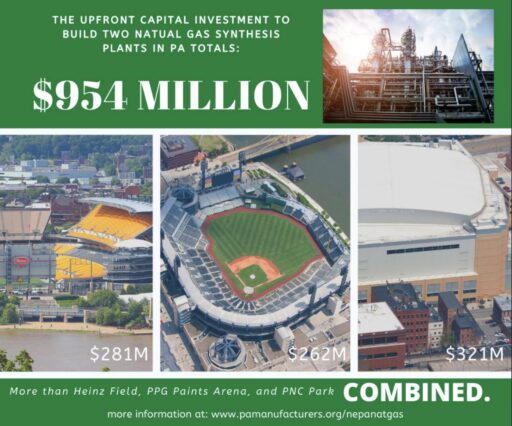 Currently, the PMA and state legislators are looking at House Bill 1100, co-authored by Rep. Aaron Kauffer and John Yudichak, as the means to entice corporate investments for natural gas synthesis plants in Luzerne and Clinton counties. Similar legislation attracted a Shell ethyline cracker plant to Beaver County in western Pennsylvania, where nearly 7,000 people were employed in its construction until a recent shutdown due to COVID-19.

HB1100 passed in the state house and senate on Feb. 4 by overwhelming numbers but was vetoed on March 27 by Gov. Tom Wolf. “This is supported by both business and labor at a time of great economic crisis,” Marrara maintains. While the original vote numbers would over-ride the governor’s veto, now is not the time he explained. “All of our efforts are focused on getting Americans and Pennsylvanians healthy again,” he remarked.

In the meantime, the next three steps toward bringing HB1100 back to the table once the COVID-19 pandemic has passes, said Marrara, are Learn, Promote, and Advocate. “Take resources available at PMA website (www.pamanufacturers.org/nepanatgas) and spread them around. Rather than thinking about breaking through the noise, be the noise.”

“We’re looking at a conversation that started prior to the epidemic,” Stark agreed. “This is leading Pennsylvania to an opportunity to reboot our economy when we get to the other side. We can have all of the plastics necessary and get them to the first responders.”

Marrara suggested that the current health crisis also buys HB1100 supporters time to address concerns from environmentalists. “These are all products that are necessary for the way we used to and will live again,” he stated. “Pennsylvania has some of the most strict regulations. A true environmentalist has to admit that they would rather that the products be extracted and produced here where there is a maximum amount of oversight, as opposed to Russia or Saudi Arabia.”

“We couldn’t control having the virus come, but now we have the opportunity for manufacturing in mass. And we can do it economically,” Kozera remarked. “If our domestic industry goes away, so does our economy. This is good for the environment and good for our people. We can’t control today, but we can make an impact on the future.”

Editor’s Note: These petrochemical presentations are well worth watching. Check out the videos at the event website. The Petrochemical Revolution is real and we need to be a part of it. We already are, in fact.