The goal is to secure additional financial optionality in response to the high uncertainty caused by the Covid-19 crisis, Kallanish Energy reports.

Aker BP will reduce its 2020 capex by 20% to $1.2 billion, with capital spending dropping to “well-below $1 billion” in 2021-22. The plans also include a 20% cut on exploration spending, with further reductions expected in the following two years. 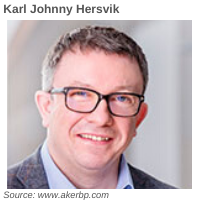 As a result, Aker BP will no longer drill 10 exploration wells this year, as previously planned. Along with partners, it has delayed drilling of two wells, setting the exploration spending at $400 million this year, down from the $500 million planned.

Its production guidance for 2020 remains unchanged at 205,000-220,000 barrels of oil equivalent per day, but its production costs are now reduced to $7-8/Boe, from the previous guidance of $10/Boe. That’s because non-critical activities are being postponed and the weaker Norwegian currency favorably impacts the cost level, it explained.

“Our industry is currently facing an extremely challenging situation,” said CEO Karl Johnny Hersvik. “With the measures we are now undertaking, Aker BP is well prepared to face the challenging market situation, and we have the financial resources to pursue value accretive growth opportunities ahead.”

The company said that its oil and gas production has not been impacted by the operational response to the coronavirus pandemic, which includes reducing activity level and number of offshore personnel to a minimum.