However, other factors have slowed pipeline construction in the Northeast U.S., including a barrage of lawsuits thrown against the region’s two largest lines now under construction, according to analytics/consulting firm Genscape.

Currently, there are 9-10 projects under construction in the Northeast, representing 5.8 billion cubic feet per day of capacity, Breshears said. All projects are expected to come online from late 2020, to 2022.

“The big projects in that group are the Mountain Valley and Atlantic Coast pipelines,” Breshears said.

The $5 billion Mountain Valley line (MVP) runs roughly 303 miles from northwestern West Virginia to southern Virginia, and will flow up to 2 billion cubic feet per day of natural gas. 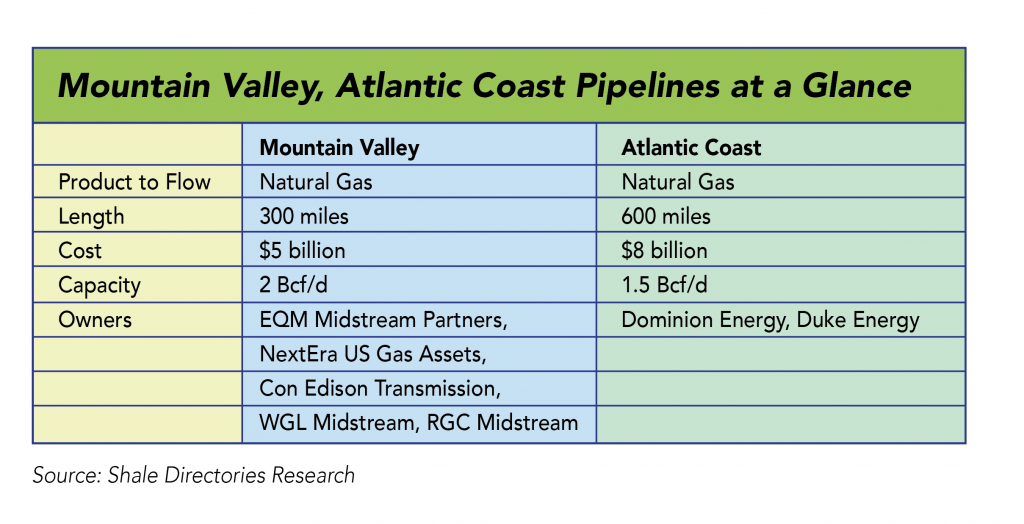 The nation’s highest court is to determine whether the U.S. Forest Service or the National Park Service has jurisdiction in ruling if ACP can be built some 600 feet below the Appalachian Trail.

If the Supreme Court rules the crossing is U.S. Forest Service land, the project is likely to quickly be completed. But if the justices decide the National Park Service is in charge, the pipeline crossing would need congressional approval, which could bog down the project.

Although Mountain Valley’s crossing of the trail — to the west, in the Jefferson National Forest — wasn’t directly challenged in the case, it could be affected by what the Supreme Court does.

A ruling from the high court is expected by June.

The possible looming problem pipelines nationwide could face is based on an April ruling by U.S. District Court Judge Brian Morris in Montana.

Morris concluded because the Corps failed to consult under the Endangered Species Act when it reissued NWP 12 in 2017, the permit‘s invalid.

“Right now, it’s unclear the impact of the Corps not being able to issue Section 12 permits,” Breshears said. “Or if projects that already have Section 12s (including ACP and MVP) now will have them pulled.

“One thing is certain: no Section 12 permit, no construction.”