Baltimore was ranked America’s most dangerous city based on 2017 data but it is busy fighting fossil fuels. Is it a distraction, a shakedown or just stupid?

Our friends at Energy In Depth carried an interesting story the other about how how the City of Baltimore has been fighting fossil fuels and, it appears, using Michael Bloomberg’s special interest money, to do so. There’s a trial lawyer scam somewhere in the mix, too, with barristers looking to make it rain settlements like it’s never rained before. You can read about it here and here. What’s most interesting, though, is the sheer gall attaching to the Baltimore effort. 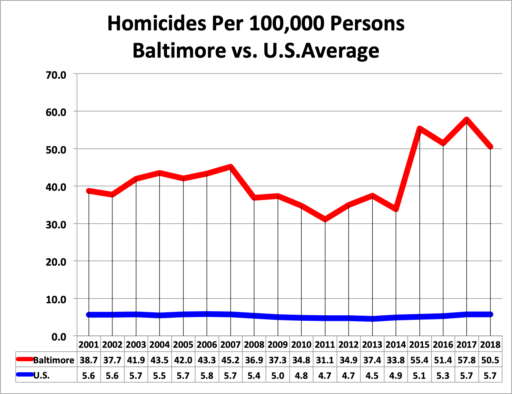 Appreciating the rank corruption that is Baltimore requires a perusal of its lawsuit against fossil fuel companies. It is a 137-page diatribe against oil and gas companies, largely focused on the threat of rising sea levels supposed caused by global warming brought on by use of fossil fuels. It’s like reading a cruel fairy tale about a wolf who drowns its victims, with one hysterical assertion after another, each one less believable than one before as we’re assured Baltimore will disappear beneath a deluge not even Noah could survive.

Baltimore features 60 miles of waterfront land within four major watersheds. Relative sea level has risen at a rate of about 0.125 inches per year between 1902 and 2006, which is significantly higher than the global average of 0.08 inches per year. Sea level in Maryland, including Baltimore, will continue to rise significantly. At the regional level, the State has been subsiding at a rate of approximately 1.5 mm per year. This subsidence exacerbates the effects of relative sea level rise. By 2050, sea level along Maryland’s coast could rise as high as 2.1 feet above sea level in 2000.

Three footnotes are attached to this paragraph, two of which attach to this City of Baltimore report and the third of which refers to this state report. Here’s the source of the first two bolded assertions above:

For a number of reasons—including climate change and an increase in global temperature—the world’s sea levels have been rising over the past 100 years. In Baltimore, NOAA sea level gauges at Fort McHenry, as well as other official reports, have shown that relative sea level in the Harbor area has increased by 12 inches since 1900. The most current sea level data from the Maryland State Climate Change Commission and from the Intergovernmental Panel on Climate Change indicate that sea levels in the Baltimore region could experience an additional rise of 1.5 to 3 feet in the next 50 years. Approximately 1.33 percent of Baltimore City’s land is within the projected sea level rise zone.

Projections for global increases in sea level range from less than 1 foot for lower emissions scenarios to as much as 1.6 feet for higher emissions scenarios by the middle of the century. By 2100, these projections swell to between 1.7 and 4.6 feet. In Maryland, relative sea-level rise projections range from 0.9 to 2.1 feet by 2050 and 2.1 to 5.7 feet by 2100. In fact, recent findings reveal that sea level rise is accelerating faster than previously projected due to rapid polar ice sheet melting. In particular, sea level rise has also been greater than anticipated along Mid-Atlantic coastlines, where the waters rise as the flow of the Gulf Stream slows.

These paragraphs are also footnoted. The 1.33% figure comes from an undated, untraceable reference to Oxfam America, a global poverty fighting organization with no expertise in climate, so that gives you an idea of what we’re dealing with here. But, let’s just accept it for now. You mean to say Baltimore, which was rated America’s most dangerous of 50 largest cities last year, is fighting fossil fuels regarding their potential impact on 1.3% of its land? A city experiencing 56 homicides per 100,000 people is busy addressing global warming rather than putting 100% of its efforts into reducing murder and other out-of-control crime? What accounts for such bizarre priorities?

Well, there are four possibilities:

Regardless, the data being cited to support the lawsuit is very flawed and highly deceptive. Notice, for example, the lawsuit says Baltimore’s “relative sea level has risen at a rate of about 0.125 inches per year between 1902 and 2006,” but the 2013 report it cites says “relative sea level in the Harbor area has increased by 12 inches since 1900,” which is only 0.107 inches per year. Which is it?

Also, notice the city admits it is sinking irrespective of any supposed global warming impacts but offers that data in millimeters rather than inches; some 1.5 millimeters per year. Why would it use two different methods of measurement? Perhaps it’s because 1.5 millimeters is equivalent to 0.059 inches or 55% of of the relative rise in sea level. Subsidence is not exacerbating relative sea level rise; it accounts for the majority of it, as is the case with many cities south of the glacial line.

That part of relative sea level rise not attributable to subsidence is also highly questionable as this article explains.  But, let us just assume it is accurate and focus on the lawsuit statement that relative sea level “could rise as high as 2.1 feet above sea level in 2000″ by 2050. When we follow up on the citation we find the projection is, in fact, a range of 0.9 to 2.1 feet, although other quite different ranges are also offered, indicating everyone is merely guessing. The low end of the range, which is every bit as valid a guess as the high end, suggests an increase of 0.216 inches per year between 2000 and 2050. The high end represents an increase of 0.504 inches per year, which is almost five times the increase from 1902-2006. Does that sound reasonable? Obviously not.

But, here’s the thing: the same Maryland report from which these numbers are taken also provides a range of estimates for subsidence as well. Indeed, the range is 1.3 to 1.7 millimeters. This means that, if compared highs to highs, subsidence would account for 0.67 inches or 32% of the increase in relative sea level, but if we compare lows to lows, it amounts to 57%. And, the report also notes rates as high as 2.73 millimeters or 0.107 inches per years have been recorded along the Maryland coast. That’s the full amount of change in relative sea level, as noted above; meaning 100% of the change has zero to do with global warming. Moreover, there is additional caveat:

It should be kept in mind, however, that VLM [vertical land movement or subsidence] may be greater locally due to sediment compaction and groundwater withdrawal effects.

So, nothing about the basis of Baltimore lawsuit against oil and gas is anything more the pure conjecture. Read it, follow the footnotes and the links and you’ll find qualification after qualification. It’s a series of best guesses, “best” being an adjective defining the degree of political correctness.

Why is Baltimore playing this stupid game? It appears all three of the possible reasons articulated above could apply but, if I had to guess, it’s mostly the potential to generate settlement cash and distract from Baltimore’s real problem, the fact it’s America’s most dangerous large city. And, it’s dangerous in a multiplicity of ways, not the least of which is this political corruption.