Banpu is a Thai energy company that has been buying up shale resources in Northeastern Pennsylvania, has built new offices here and is investing in Texas.

Thailand’s largest coal producer, Banpu, is also a growing investor/operator in the northeast Pennsylvania Marcellus Shale. In June MDN brought you an update on a new $5 million facility being built by Banpu in Tunkhannock Township (Wyoming County), Pennsylvania. We’re happy to report last week Banpu held the grand opening of their new office/facility in Tunkhannock. 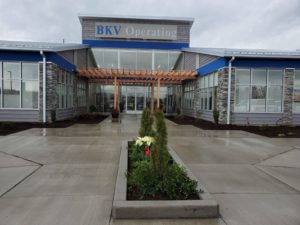 Unfortunately MDN didn’t receive an invite to the ceremony. Perhaps it got lost in the mail? (Just kidding! We’re not offended at not receiving an invite.) We spotted an announcement from Banpu about their grand opening ceremony. Banpu’s CEO as well as the Chairman of the Board were both there–making the trip from Thailand. Thailand’s Ambassador to the U.S. also attended. Quite the soiree.

Don’t be confused by the name BKV Operating or Kalnin Ventures (mentioned below). Like a Russian nesting doll, BKV Operating is a subsidiary of Kalnin Ventures, and Kalnin is the American agent/partner representing Banpu here in the U.S. Ultimately it was Banpu (Thai) money that built this new facility, and Banpu money that is being invested in Pennsylvania Marcellus drilling in northeastern PA.

Banpu invested over $500 million in 2016-2017 to buy existing Marcellus wells and acreage in northeast Pennsylvania (see our Banpu stories here). The last such purchase was in December 2017. We expect more investment from Banpu in 2020.

As for last week’s ceremony, we have this summary from Banpu:

We also spotted this note on the Royal Thai Embassy (Washington, DC) website:

On 10 December 2019, Ambassador Thani Thongphakdi congratulated BKV Operating LLC for the grand opening of its headquarters in Tunkhannock in northern Pennsylvania. BKV Operating LLC is Banpu’s investment in the U.S. shale gas industry, with cumulative investment of almost 700 million U.S. dollars since 2016.

In his congratulatory remarks, Ambassador Thani highlighted the time-tested relationship between Thailand and the U.S., anchored by shared values and driven by mutual interests and entrepreneurial spirit. Thai conglomerates like Banpu continue to expand their businesses and investments in the United States, contributing to local economies and creating jobs wherever they go. The upward trajectory of Thai investment in the U.S. is expected to rise even further.

Banpu’s Chairman of the Board Directors, Mr. Chanin Vongkusolkit, CEO Somruedee Chaimongkol, and Board Directors attended the opening ceremony. They were joined by Pennsylvania State representatives, Mayor Stacy Huber of Tunkhannock, Kalnin Ventures and BKV Operating employers as well as land owners in the area.

And, just like that, only day after writing the above, Banpu has also bought out all of Devon Energy’s Barnett Shale assets in Texas–spending $770 million to do so. Which points out, yes, drillers and investors do have choices and yes, their money will leave Pennsylvania (and Ohio and West Virginia) if the economics make more sense elsewhere.

Hey, we don’t blame Banpu. They’re on the hunt for natural gas assets wherever they can find them. They went bargain hunting and found a great deal in the Barnett. Good for Banpu. But it’s bad for the M-U, because they could have spent that money here.

Our point is that we so often hear anti-fossil fuelers who support insane taxes (like a Pennsylvania severance tax) make the bold claim that “the gas is here, drillers won’t leave the state if we tax it more.” Bull. They can and will leave the state. Never forget that the Marcellus/Utica competes with other major shale plays across the country for capital investment. 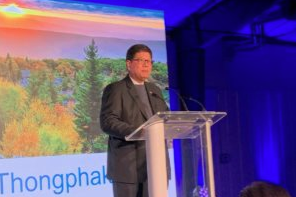 Don’t be confused by the name Kalnin Ventures or BKV (Banpu Kalnin Ventures) mentioned in the press releases below. Like a Russian nesting doll, BKV is a subsidiary of Kalnin Ventures, and Kalnin is the American agent/partner representing Banpu here in the U.S. Ultimately it was Banpu, Thailand’s largest coal company, that purchased the Barnett assets from Devon Energy for $770 million.

Here is the press release issued by Kalnin/Banpu:

Kalnin Ventures LLC (“Kalnin”) today announced that an affiliate of its investment vehicle BKV Oil & Gas Capital Partners, L.P. (“BKV”), has entered into a Purchase and Sale Agreement to acquire Devon Energy Corp.’s (NYSE: DVN) (“Devon”) assets in the Barnett Shale. The expected closing date is in 2020, subject to customary closing conditions, and the overall transaction is worth $770 million.

BKV is financially backed by its sole investor, Banpu Pcl, a Thailand-based coal mining and power-generation company with total assets of approximately $8 billion.

The transaction with Devon includes over 320,000 gross acres and 4,200 producing wells, making BKV the largest natural gas producer in the Barnett Shale. This acquisition marks the BKV’s seventh major transaction and first position in the Barnett Shale play. BKV has invested or committed over $1.3 billion since its formation 2015.

“We are excited to announce this acquisition in the Barnett Shale, as this continues our strategy of PDP weighted cash flow yielding investments, where we can leverage technology to drive operational performance,” said Christopher Kalnin, CEO of BKV. “Devon has done wonderful work in the Barnett Shale and we look forward to continuing that tradition, delivering high-quality returns for many years to come.”

Kalnin Ventures is a values?driven firm that believes that the combination of visionary strategy, focus on execution, and balance in day?to?day life are the keys to creating long?term sustainable value.

Kalnin Ventures is backed by investors with significant equity commitments from Banpu Pcl and seeks to invest in attractive upstream oil and gas opportunities in North America with the goal of creating long?term sustainable value in the energy industry. More information is available at www.kalninventures.com.

Banpu Public Company Limited is listed on the Stock Exchange of Thailand and is one of the energy leaders in the Asia-Pacific region with widespread experience in a variety of domestic and international energy industries. Banpu is focused on developing and investing in coal, power generation, natural gas and alternative energy, with investments located in Thailand, Indonesia, China, Australia, Lao PDR, Mongolia, Singapore, Japan and the United States. More information is available at www.banpu.com.

And, here is the press release issued by Devon Energy:

Devon Energy Corp. (NYSE: DVN) today announced it has entered into a definitive agreement to sell its assets in the Barnett Shale to Banpu Kalnin Ventures (BKV) for $770 million. This transaction is subject to customary terms and conditions and is expected to close in the second quarter of 2020. Devon expects no incremental cash taxes associated with the divestiture of these assets.

“Devon’s transformation to a U.S. oil growth business is now complete,” said Dave Hager, president and CEO. “The timely and tax-efficient exit from Canada and the Barnett this year has generated $3.6 billion of proceeds at accretive multiples to Devon’s current valuation. Furthermore, these transactions accelerate efforts to focus exclusively on our resource-rich U.S. oil portfolio, where we have the ability to substantially increase returns, margins and profitability.

“The Barnett Shale has been a cornerstone asset for Devon over the past two decades,” said Hager. “With this change in ownership, it is great to see our talented and innovative employees supporting this high-quality gas asset transition to a world-class company like Banpu.”